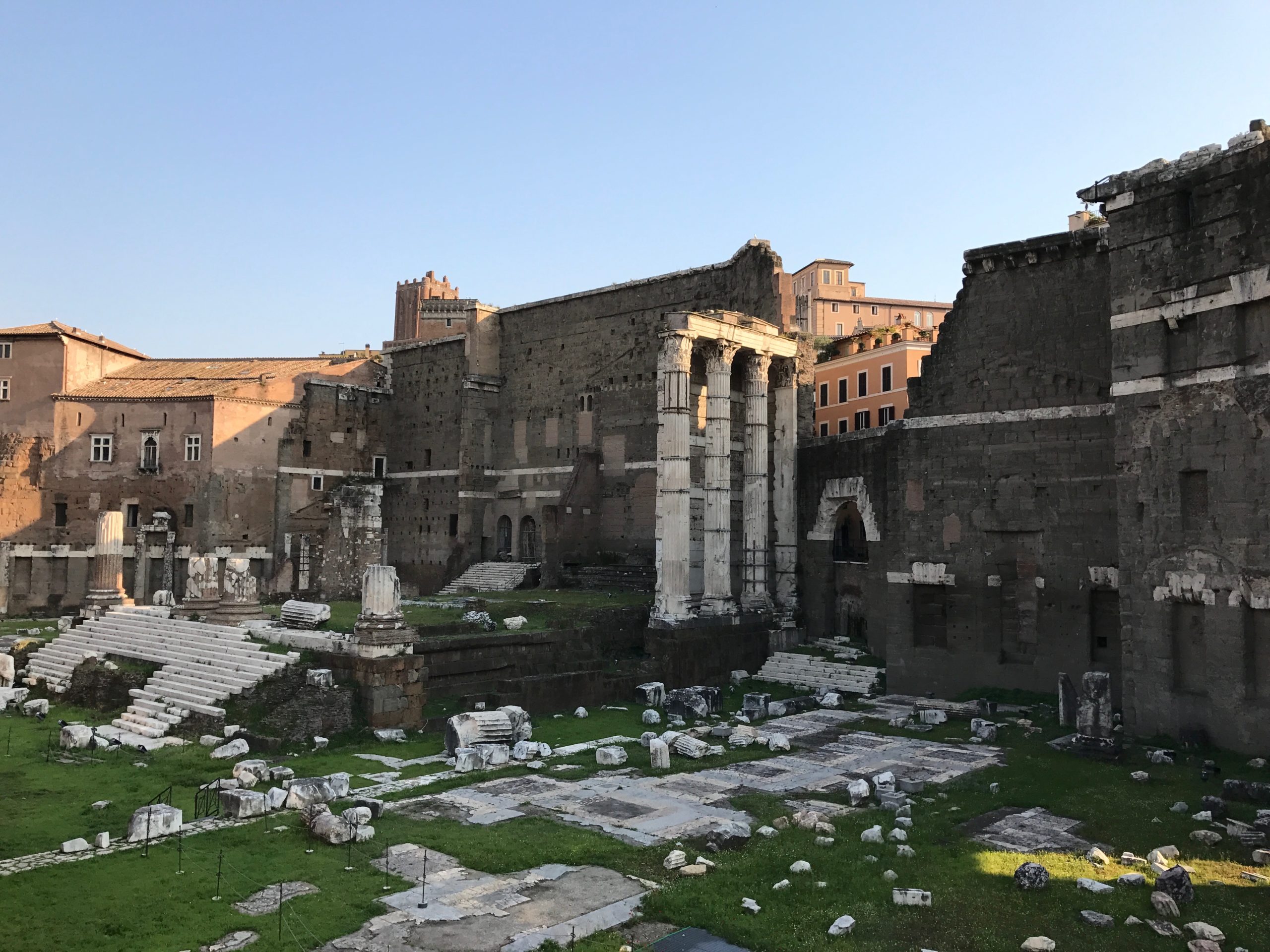 Continuing the trend started by Julius Caesar, Augustus vowed a temple (to Mars Ultor, to avenge the assassination of Caesar) and built it in a new forum space. The construction took a long time: vowed in 42 BC, completed in 2 BC. The result was a stunning colored marble extravaganza that had never been realized in Rome until Augustus. The complex, stunningly described by Ovid (Fasti 5.549-570) was also a sort of public atrium of Augustus’ family, showcasing the great men of Italy and of Augustus’ ancestors, into a single statement focused on his own greatness, matched by the gilded bronze quadric statue of Augustus in the center of the piazza (Augustus, Res Gestae 35). It was used for business, Senate deliberations, point of departure for generals heading to the provinces, and repository of triumphal insignia (Suetonius, Aug. 29.1-2).
The massive firewall, over 300 meters long (30 m high) still survives, protecting the forum form the Subura, Rome’s slums. Two staircases led down into the site from the Subura.
The Temple of Mars Ultor is 1.5 times the size of the Temple of Venus Genetrix in the Forum of Caesar. It has two columns of Carrara marble still standing, composed of 50 foot shafts for an overall height of almost 18 meters.
The piazza, entirely covered by a pavement of colored marble (Lucullan pink/black, Numidian yellow and Italian grey), flanked with porticoes over 100 meters long. The porticoes’ attic stories were decorated with alternating caryatids (copied from the Erechtheion on the Athenian Acropolis) and Hellenstics style marble shield portraits of Jupiter. The porticoes hid massive exedra halls large enough to house tribunals, described in the sources.
A “hall of the colossus” was probably a massive statue of Augustus himself, according to the hand and face fragments of a statue found, originally +10 meters high.
There were niches in the firewall to accommodate statues of famous Romans described by texts on marble elogia plaques. The exedrae contained colossal statues of Romulus and Aeneas emphasizing Rome’s beginnings and ancestry as well as that of the gens Iulia.
The site was in decline in the 5C-6C and stripped by the 10C, after which the Church of S. Basil (10C) was installed on the podium, and the House of the Knights of Malta was placed top of a portion of the fire wall, enhanced by a Renaissance loggia. The site was largely filled in 12-15C for agricultural purposes, with little change until the church was dismantled by Mussolini during the demolition for the imperial fora road.

In the temple certain formalities were regularly observed, i.e. the assumption of the toga virilis by young men, the formal leave-taking of provincial governors when setting out for their posts, and their reception when returning with signs of victory which were deposited here, together with other less important functions (Cass. Dio Iv. 10. 3-5; Suet. Aug. 29.2; Cal. 44). It served as a place of safe deposit until some thief stole the helmet of Mars (luv. xiv. 261-262 and Schol.), and was the scene of the famous banquets of the Salii (Suet. Claud. 33 ; CIL vi. 2158; LS i. 80). It is usually supposed that the standards recovered from the Parthians were kept in this temple after its completion (Mon. Anc. v. 42), being removed thither from the temple of Mars Ultor on the Capitol (CIL i². p. 318).

The forum was rectangular in shape, about 125 metres long and 90 wide, and joined the forum Iulium on the north-east, its longest axis being perpendicular to that of the latter. The regularity of this rectangle was broken by two large semi-circular apses or exedrae on the south-east and north-west sides, and also at the north-east end, where Augustus had evidently not been able to get all the land he desired (see above). Exactly in the middle of the north-east half of the forum stood the temple, with its end abutting against the enclosure wall. The forum was surrounded by an enormous wall, which served the double purpose of protecting it against fire and shutting off the view of the squalid quarters of the city in the immediate neighbourhood. A considerable part of this wall at the north-east end, and of both exedrae, has been preserved. It was originally nearly 36 metres high, and was built of large blocks of peperino in alternate courses of headers and stretchers, with wooden dowels (see above), but no mortar. On the outside two courses of travertine divided it into three sections. Travertine is also used at other points of stress. In the part of the wall now standing is one of the original arched gateways, Arco dei Pantani, through which the modern Via Bonella passes, 6 metres above the ancient level (III. 25). The inner surface of the wall was covered with marble and stucco. Whether a colonnade and porticus surrounded the south part of the forum -within the wall is uncertain.

Each apse was separated from the forum area by a line of four pilasters and six fluted columns of cipollino, 9.50 metres high, which supported an entablature of white marble. In the curved wall of the apse were two rows of rectangular niches, the lower about 2.50 metres and the upper about 15, from the pavement. The wide wall-space (about 8.50 metres) between these two rows of niches, which appears to have been bare of ornament other than the lining, was probably masked by the entablature. About 5 metres above the upper row of niches ran a cornice, and above this the wall rose again for a considerable height. In each apse in the lower row were fourteen niches, not counting the large one in the middle, and four between each apse and the temple, making thirty-six in all. Whether there were more in the other portion of the wall is not known. In the lower niches were the statues of the triumphatores, and in the upper probably trophies. Between the niches were marble pilasters.

1 The reference in this passage need not be to Rome at all.

5 Unless we attribute to Hadrian the smaller rectangular niche which was afterwards placed inside the apse of the temple (Gnomon, iii. 58-60). Whether the podium was decorated with bronze reliefs is now questioned (ib.).

This altar stood on the west side of the via Flaminia and some distance north of the buildings of Agrippa, on the site of the present Palazzo Peretti Fiano-Almagià at the corner of the Corso and the Via in Lucina. Fragments of the decorative sculpture, found in 1568, are in the Villa Medici, the Vatican, the Uffizi, and the Louvre; others, found in 1859, are in the Museo delle Terme and in Vienna. They were recognized as parts of the same monument by Von Duhn and published in 1881 (Ann. d. Inst. 1881, 302‑329; Mon. d. Inst. XI pls. 34‑36; for a fragment found in 1899 cf. NS 1899, 50; CR 1899, 234). Systematic excavations in 1903 under the palazzo (NS 1903, 549‑574; CR 1904, 331) brought to light other remains of the monument, both architectural and decorative. The work was not finished, but arried far enough to permit of a reconstruction which is fairly accurate in its main features, although there are still unsolved problems in connection with the arrangement and interpretation of the reliefs. Most of the fragments then found are in the Museo delle Terme (PT 65‑68), though others still remain on the site. 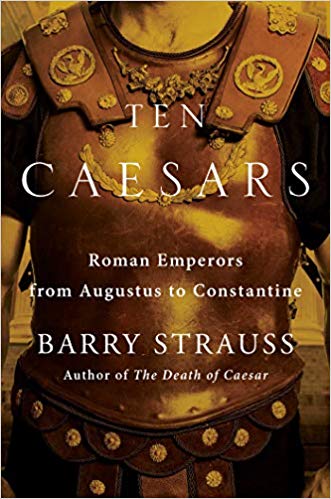 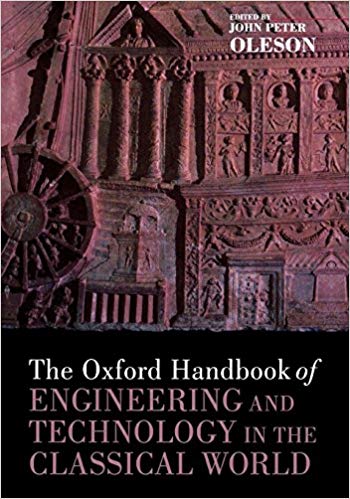 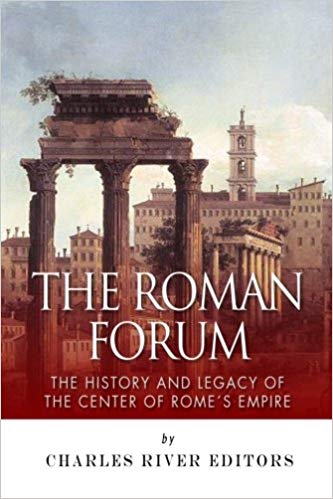 The Roman Forum: The History and Legacy of the Center of Rome’s Empire