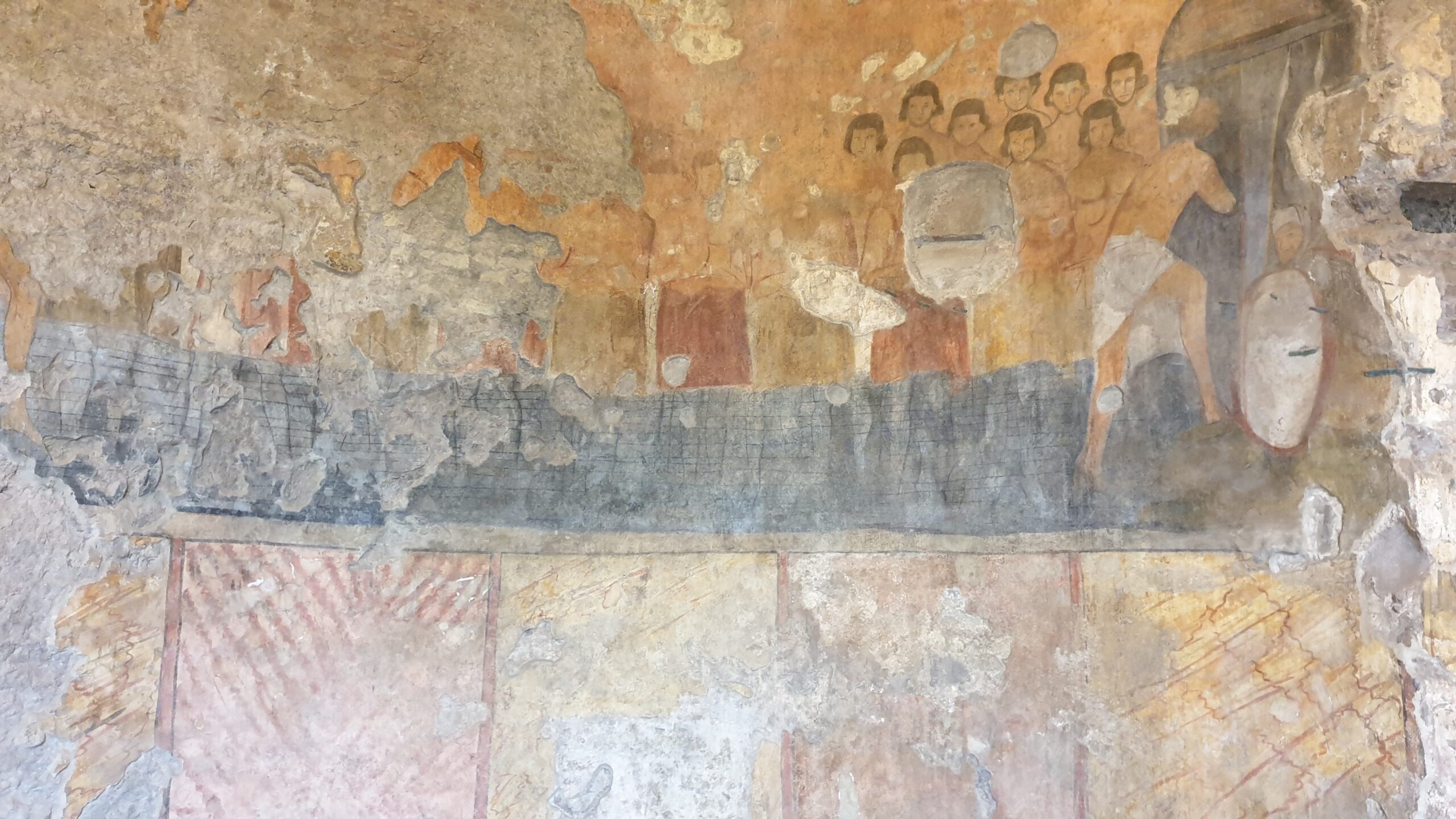 The Christian faith evolved from the teachings of Jesus of Nazareth, a Jewish teacher who was executed by the Romans around 33 CE. Reconstructing the worldview of Jesus has proven challenging for historians, though many agree that nonviolence was a core component of Jesus’ teaching. According to the canonical gospels, Jesus taught his followers to love their enemies and to acquiesce to a violent person instead of resisting (Matthew 5:38-45). Jesus is said to have discouraged his followers from violence when he was arrested and executed by Roman soldiers (Luke 22:47-53).

With this beginning, we might expect the churches that sprang up after Jesus to shun violence—and particularly to shun the Roman army which was responsible for his death. In fact, the first Christians displayed a complicated relationship with the army. Many (though not all) Christian leaders spoke negatively of the army and discouraged Christians from serving in the ranks, yet there is abundant evidence that Christians did serve in the army. What drove this complicated relationship between the early church and the Roman army?

Christian hostility toward the army was probably always the majority view. Celsus, a 2nd-century Greek philosopher, wrote an anti-Christian treatise which included the charge that Christians shirked their civic duty by refusing to participate in public life and serve in the army. Origen, an early Christian theologian and scholar, attempted to counter Celsus; tellingly, Origen did not dispute the accusation. Rather, Origen argued that Christians benefited the empire through their prayers and their holy lives.

Christian aversion to the army sprang from several factors. First, serving in the army involved the possibility of warfare, though the likelihood of a soldier experiencing violence varied—some border provinces along the Rhine and Danube were always ripe for violence, while troops stationed in Egypt or Africa might have enjoyed relatively peaceful careers for much of the imperial era. The emerging Christian faith, in general, remained opposed to violence; church leaders taught that Christians should avoid a career that entailed killing, even in war.

There were other aspects of army life that Christians opposed. Since most provinces did not have any force that we would equate with law enforcement, soldiers might also be assigned duties that we would classify as “policing” today. Roman soldiers had always been used in a law enforcement capacity, but in the second and third centuries detachments of soldiers were increasingly posted among civilians to maintain order. In this capacity, soldiers did everything from chasing bandits to executing criminals to arresting Christians during periods of persecution. Christians might have found some of these aspects of army life disagreeable.

Based on the surviving writings of church leaders, however, the most distasteful aspect of the army for Christians would have been its religious character. The army, and particularly its auxilia units, drew recruits from across the empire and beyond. The army thus became a melting pot of ethnicities and religions, with everything from traditional polytheistic religious practices to mystery cults venerated within its ranks. Jupiter Dolichenus, a fusion of Hittite and Roman gods, was venerated in one such mystery cult. The name of Jupiter Dolichenus is recorded on a surviving papyrus fragment as the cohors XX Palmyrenorum’s password for the morning of May 28, 239 CE—suggesting that the god’s name was familiar enough to be easily memorable for all the soldiers in the unit. Christians, well-known for bucking the religious pluralism of the empire and denying the existence of all gods but their own, might have been uncomfortable in such a setting.

Beyond this general religious diversity, a Christian recruit would also have faced mandated religious practices in the army. A unit had religious personnel on its staff, including victimarii who killed sacrificial animals and haruspices who practiced divination on the entrails. Before a battle, sacrifices would be performed for the pleasure of the gods and the purification of the army. Each unit’s standards were endowed with religious power (Tacitus describes the legionary standards as propria legionum numina, “the very divinity of the legions”).

A window into the religious life of the army is provided by the Feriale Duranum, a calendar of religious observances discovered at Dura Europos and dated to the reign of Severus Alexander (222-235). Only a portion of the list is preserved, but it contains forty-three religious observances mandated for the unit—everything from the Quinquatria festival for Minerva to the Rosaliae signorum for the military standards to anniversaries of deified imperial family members. A Christian in the army would need to navigate all these polytheistic religious observances.

All of this combined to make soldiering a disagreeable profession for many Christians. The 3rd-century apologist Tertullian gave voice to what was, possibly, the majority view among church leadership:

I think we must first inquire whether military service is proper at all for Christians….Shall it be held lawful to make an occupation of the sword, when the Lord proclaims that he who uses the sword shall perish by the sword? …Shall he carry a flag, too, hostile to Christ? And shall he ask a watchword from the emperor who has already received one from God?…Then how many other offences there are involved in the performances of camp offices, which we must hold to involve a transgression of God’s law, you may see by a slight survey.

Christians in the Army

Regardless of what church leadership said, Christians were serving in the army by the late 2nd-century. Tertullian tells a story of a Christian who had apparently served in the army for many years, yet chose to protest the wearing of a laurel crown on one occasion and was eventually martyred as a result. One of the oldest extant Christian inscriptions is a funerary inscription from 201 CE, for a Christian who served in Legio II Parthica. A centurion left an inscription in a church’s mosaic floor at Megiddo, likely in the 3rd-century. Many other literary and epigraphic evidence exists, demonstrating that Christians were always a minority presence within the army.

Why did these Christians serve in the army, and how did they reconcile their monotheistic faith with Roman army religion? Enlistment came with some financial and social benefits, making it an attractive option for some segments of society; Christians felt this allure, just as non-Christians did. Perhaps the same religious diversity that made the army loathsome to Christian leaders made service manageable for lay Christians—perhaps there was a degree of anonymity granted by the myriad of religions, and a Christian recruit’s faith might have been one of the dozens of faiths practiced within any given unit. Finally, the religious flexibility that marked Roman administration seems to have extended to the army as well; Roman authorities were generally quite tolerant of religious beliefs as long as those beliefs did not create disorder. When literary accounts describe soldiers who are martyred for their faith, it often comes after numerous opportunities for troops to fall into line. A Christian who was willing to be discreet about his faith may have faced few external obstacles from serving, and—particularly as troop shortages became a more pressing problem in the late imperial period—the army was likely happy to have him.

Haynes, I.P. “The Romanisation of Religion in the Auxilia of the Roman Imperial Army from Augustus to Septimus Severus.” Britannia (Society for the Promotion of Roman Studies) 24 (November 1993): 141–157.

Created by The American Institute of Roman Culture, published on 03/03/2021 under the following license: Creative Commons: Attribution-NonCommercial-ShareAlike. This license lets others remix, tweak, and build upon this content non-commercially, as long as they credit the author and license their new creations under the identical terms. Please note that content linked from this page may have different licensing terms.