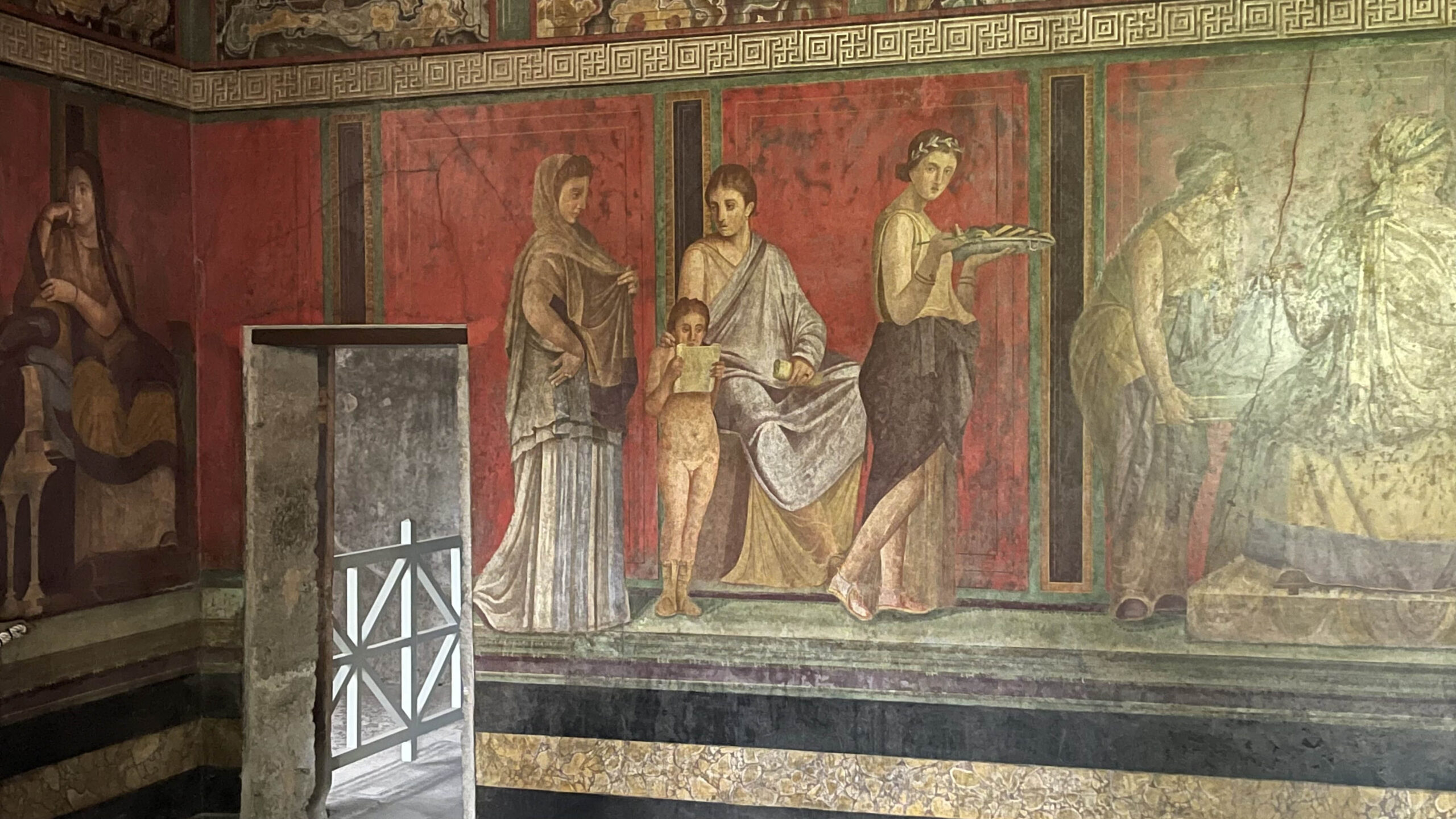 Pompeii: A Brief Introduction from Foundation to Destruction

The burial of Pompeii in the eruption of Vesuvius in 79 CE provides modern archaeologists with, as it is often called, a “snapshot” of life in a first century city in Roman Italy. Yet, Pompeii had a long and rich history before its destruction. In this post, we will briefly look at the history of Pompeii and how what remains today can tell us a story stretching back much further than 79.

The earliest days of Pompeii remain a point of significant debate. There is archaeological evidence to suggest that the region around Pompeii had been inhabited since at least the 8th century BCE, but our earliest evidence for what we would call a town or city comes in the 6th. Two temples were founded in this period: 1) the Doric Temple (named for the capitals of its columns, sacred to Athena and Hercules) in regio VIII, next to the Triangular Forum, and 2) the Sanctuary of Apollo in regio VII, which was built in the area that would eventually become the main Forum. These temples tell us much about the early city. To varying degrees, both these temples combine Etruscan and Greek artistic elements, which is a testament to the rich cultural landscape of early Pompeii. Epigraphic evidence at these sites confirms this, with Oscan (an Italic language) monumental inscriptions and Etruscan votive offerings. It is also in the sixth century that Pompeii got its first city wall, which is still visible in places today.

For about a century, from the middle of the sixth until the mid-fifth century BCE, Pompeii was a member of the Etruscan League, a political alliance of Etruscan communities. In 474 BCE the Etruscan League lost sway over the Bay of Naples after losing a battle to the alliance of Syracuse and the culturally-Greek city of Cumae. Pompeii seems to have been largely abandoned from this point until the mid-fourth century BCE. Beginning in the 420’s BCE, the Samnites, a group of people from the Apennines, begin to take control of the region around Pompeii and slowly start reestablishing Pompeii. It is actually in the Samnite Period that many of the city’s most recognizable spaces get their start. The Forum in regio VII begins to take shape, bolstered by the construction of the Temple to Jupiter at its north end. In regio VIII, two major projects, the Large Theater and the Samnite Palaestra were completed to form a kind of leisure quarter. Just north of these, back in regio VIII, the Stabian Baths provide Pompeii with its first public bathing complex.

Click here for an interactive map of the regions of Pompeii.

Around the time that Pompeii was flourishing under Samnite influence, it was also entering into the sphere of influence of a powerful northern neighbor: Rome. In the fourth and third centuries Rome fought a series of conflicts called the Samnite Wars, a difficult struggle, which resulted in a Roman victory and the adoption of Samnite communities in Campania as allies of the Roman people. From this point on, Pompeii remained a loyal ally of Rome as the latter expanded its reach into southern Italy. Notably, Pompeii remained loyal to Rome during the Hannibalic War (218-201 BCE) even as several of its neighbors in Campania rebelled and supported Carthage. The Romans appreciated loyalty, so while other Campanian towns suffered retaliation following the expulsion of Hannibal from Italy, Pompeii flourished. A dedication by the Roman consul L. Mummius in the Temple of Apollo speaks to the closeness of the alliance.

The Doric Temple of Pompeii, Wikicommons

Pompeii’s loyalty during the third and second centuries BCE did not, however, last. It joined the Italian communities that rebelled against Roman control in a conflict that would later be called the Social War (90-89 BCE). The fight between Rome and her former allies was fierce, and Pompeii itself was besieged by the future dictator P. Cornelius Sulla in 89 before eventually surrendering. At this point Pompeii, previously a nominally-autonomous ally of Rome, was re-established as a Roman colony, Colonia Cornelia Veneria Pompeianorum. Like the rest of Roman Italy, the citizens of Pompeii gained the Roman citizenship, but a large number of Pompeiians had their land taken from them and given to Roman veterans. 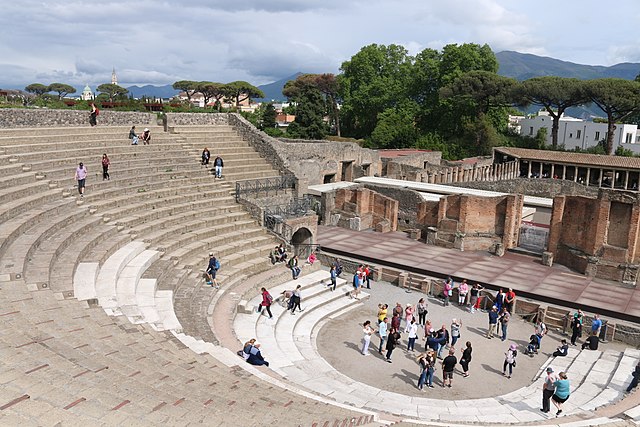 The Large Theater of Pompeii, Wikicommons

The city changed significantly with direct Roman control. The Amphitheater (regio II), The Small Theater (or “Odeon” in regio VIII), and the Forum Baths (regio VI) were built to entertain the new Roman inhabitants of Pompeii. In the Forum, the Temple of Jupiter was renovated to more closely resemble the Capitolium in Rome (which honored Jupiter, Juno, and Minerva), a powerful symbol of Pompeii’s new political situation. On the west side of the city, a new Shrine to Venus, a goddess with whom Sulla boasted a close relationship, dominated the skyline of Pompeii for those approaching from the Bay of Naples. As the political structure in Rome transitioned from the Republic to the Empire, the 30’s and 20’s CE saw another round of dramatic building projects in Pompeii. The Eumachia Building (funded by a prominent Roman woman named Eumachia) and the Temple of Augustus closed off the east side of the Forum. Most significantly, Pompeii was added to a major aqueduct, the Aqua Augusta, which brought a steady water supply to the city’s baths and fountains. 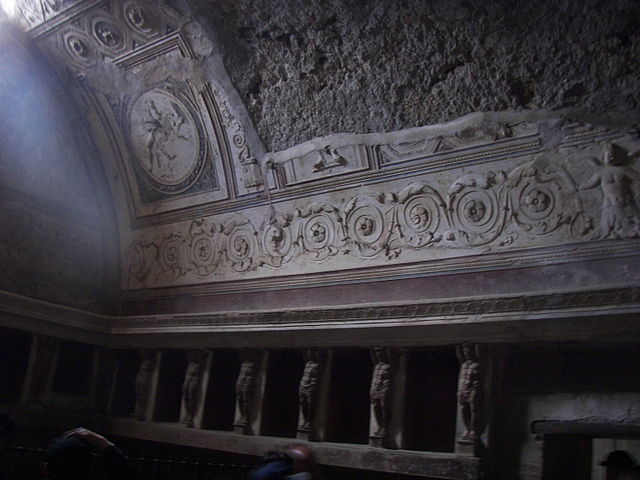 The tepidarium of the Forum Baths at Pompeii, Wikicommons

At the time of the eruption in 79 CE, Pompeii was going through yet another aggressive round of building. A major earthquake in 62 CE had sparked several rebuilding and renovation projects. The massive new bathing complex in regio IX, The Central Baths, was incomplete at the time of the eruption, as was the Temple of Isis in regio VIII. Given the trajectory of Pompeii since the end of the Social War, it is intriguing to think about just how much it would have grown had it not been destroyed by the eruption.

The account provided here is necessarily brief; each of these periods and events is still the subject of uncertainty and scholarly debate. The World of Pompeii is a collection of essays that discusses in excellent detail much of what is alluded to here. Paolo Carafa’s “Recent Work on Early Pompeii” is particularly useful, as is Stefano De Caro’s “The First Sanctuaries.” For those interested in more recent work on what the remains can tell us about the historical narrative of the city, I also recommend the article produced by the Pompeii Forum Project (“Pompeii Forum Project: Current Thinking on the Pompeii Forum,” 2013). Allison and M.G.L. Cooley’s sourcebook, Pompeii and Herculaneum (now in a second edition), is a wonderful source for textual evidence, including inscriptions. Pompeiisites.org is also a wonderful resource, especially its interactive map, which includes brief descriptions of each site and clearly marks each regio of the city. Mary Beard’s The Fires of Vesuvius remains absolutely required reading for those interested in what the archaeology of Pompeii can tell us about the life of its inhabitants.

Beard, M. 2010, Fires of Vesuvius: Pompeii Lost and Found, Harvard University Press. (This is the first paperback edition, it was originally published in 2008 by Profile Books in the UK).

Created by The American Institute of Roman Culture, published on 11/29/2021 under the following license: Creative Commons: Attribution-NonCommercial-ShareAlike. This license lets others remix, tweak, and build upon this content non-commercially, as long as they credit the author and license their new creations under the identical terms. Please note that content linked from this page may have different licensing terms.