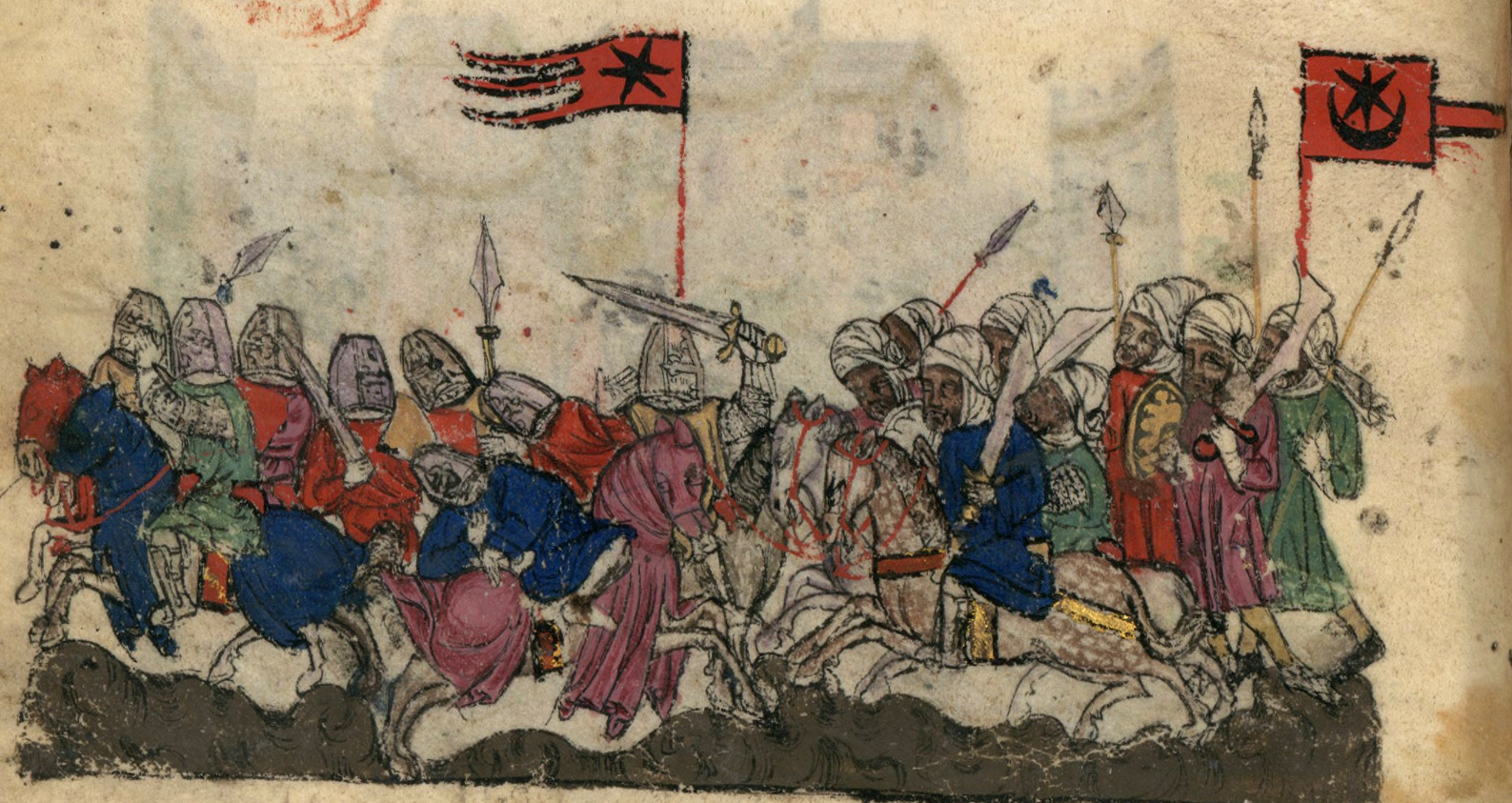 The political situation leading to the battle:

It was after the death of the prophet Mohammad in 632 that the Muslims had already strengthened their hold on the Arabian Peninsula.  They started to think about expanding outside their homeland in consideration of their immediate geo-political realities. The Muslims had two dangerous neighbors, the Persians in the northeast, and the Byzantines in the northwest.  These political circumstances would impact on the story of a small army of nomadic people who were able to bring two of the biggest empires in the world to their knees, erasing the Persian Empire from the map and humiliating the Byzantine Empire in the battle of Al Yarmouk, which is still considered today one of the most famous battles in history.

Edward Gibbon discusses the political tensions in his book ‘The History of the Decline and Fall of the Roman Empire’ saying: ‘In the victorious days of the Roman Republic, it had been the aim of the senate to confine the legions to a single war and completely to suppress a first enemy before they provoked the hostilities of a second. These timid maxims were disdained by the magnanimity and enthusiasm of the Arab caliphs. With the same vigor and success they invaded the successors of Augustus and those of Artaxerxes; and the rival monarchies at the same instant became the prey of an enemy whom they had been so long accustomed to despise.’

Knowing the power of both the Persians and the Byzantines armies back then, the chances of the Muslim victory seemed almost impossible, especially since the Byzantine army had what Arthur Ferril calls in his book ‘The origin of war’, a ‘tactically integrated army’. Yet that army formation, which had been used for successful conquest for centuries, was not enough to guarantee the victory of the Byzantine army led by Vahan, the brother of the Roman emperor Heraclius, against Khaled Ibn al Walid the leader of the Muslim army. In fact, the sources celebrate Khaled Ibn al Walid, also known as Saif Allah (sword of God) after the memorable victory as a master tactician and war leader.

During the time of Al Yarmouk battle, Khaled Ibn al Walid wasn’t the actual leader of the Muslim army; he had been removed from this position after the death of Caliphate Abu Baker, first of the Rashidun Caliphate in 634 C.E (13 A.H), who had originally chosen him to lead the Muslim army, (“By God, I will distract the Christians from the whispers of Satan with Khaled bin al Walid,” Abu Baker Al Saddik had stated).

With the arrival of the new Caliphate Omar, who simply didn’t like the Khaled Ibn al Walid, and thought he had too strong a personality, he removed him from command and installed Abu Ubaidah in the position. Abu Ubaidah was a calm, quiet man, and knowing that he didn’t have the power and the right tactics to lead a battle against the Byzantines, eventually gave up his duties and position in favor of Khaled Ibn al Walid at the beginning of the battle.  He recognized that Khaled Ibn al Walid was a better leader for such a battle, for his shrewd war tactics and his experience in the field. (Khaled Ibn al Walid had fought in with the Rashidin Caliphate was in Uhud in 624C.E (3 A.H) where he helped them in the suppression of the rebellion of the Muslims against the Rashidun Caliphate for taking power after the death of the prophet. Khaled Ibn Al Walid used the same war tactics in Uhud that he used in the battle of Yarmouk, and they proved to be very effective.)

The vicious battle started on the 15th of August 636 C.E (7 Rajab 15 A.H) and lasted 6 days.  The name of the battle was derived from where it took place,  next to the al Yarmouk river, in Transjordan. The site was chosen by the Byzantines, for its vast plain accommodated their huge army. After days of continuous inconclusive attacks by the Byzantines on the Muslim army bases, the Muslims decided to attack on the 6th day, and managed to gain the upper hand over the Byzantine army, which some sources say was ten times the number of the Muslim army. Khaled Ibn al Walid’s war strategies managed to lead the Muslims to victory, defeating the Byzantine army on the 20th of August 636 (12 Rajab 15 A.H). The battle ended with the routing of the Byzantine army, forcibly directed toward the Yarmouk bridge, where Khaled Ibn Al Waled was waiting for with a group of cavalry to finish the fleeing troops.

The biggest question here is how a small army of nomads have managed to humiliate the biggest and strongest army in the world? There were numerous factors were behind the victory of the Muslims, most of them more connected to the Arab’s lifestyle, than war strategies.

The Arabs were nomads, living in the harsh desert climate, and all that entailed being in constant danger, from the harsh weather and the insecurity of living in a wild habitat. In fact, Azar Gat, in his book ‘War in Human Civilisation’ speaks about the superiority of the nomadic people, including Arabs, in fighting and having an advantage in mobility, since their way of life demanded constant mobility and the use of horses. Yet when Gat speaks specifically about the Arabs, he speaks about an important exception. For Arabs, the main riding animal was the camel, which provided strategic mobility over long distances in inhospitable terrain.

Additionally the Arabs were warring tribes, living in never-ending conflicts over food and water, making warfare a life-long habit. Therefore, the Rashidun Caliphate did not possess much of an advantage in their military organization, and according to Gat, ‘the core of their armies consisted of infantry from the cities while the more nomadic Bedouin provided light cavalry’. If fact, the social nature of the Arab Bedouin and the fact that they were divided into tribes, fostered a sense of ‘esprit de corps’ which created a loyalty that was matched between the members of the same tribe.

As mentioned, the nature of the Arabs and their way of life played a crucial role in this victory, but even the best army in the world could not beat the Byzantine army without good military strategies. Actually, the Rashidun Caliphate were very good war planners. Even choosing the date of the battle was one of their smartest strategies. The battle of Yarmouk took place on the15th of August 636 just a few years after the brutal enduring war between the Byzantines and the Sassanians from 602 until 628. By 628 both armies were exhausted, and took a lot of losses, which created a golden opportunity for the Muslims to attack them on multiple fronts from 629 C.E arriving to the climax in the battle of Al Yarmouk in 636.

At the end, this battle was and is still considered one of the most important battles in history, and it always comes to mind speaking about the Muslim conquest, or Muslim culture, since this battle was the door that allowed the Muslim people and culture to reach the rest of the world. It granted the Muslims the opportunity to expand outside the Arabian Peninsula. After the victory in Al Yarmouk, the Muslim took Syria and the Levant, forever ending Byzantine ruling of the area. (It is said that when the emperor Heraclius left Syria he said, “Goodbye, Syria, my fair province.  You are now my enemy’s”).

The Battle of Al Yarmouk changed the life of Muslims, and transformed them from nomads to city dwellers.  In Syria, where Muslims took over Roman and Byzantine cities, they learned a great deal about urban planing as they started building their own new cities.

Cover image: Illustration of the Battle of Yarmouk (636) at the bottom of the page of BNF Nouvelle acquisition française 886 fol. 9v (early 14th century), via Wikipedia (Public Domain)

Created by The American Institute of Roman Culture, published on 10/02/2020 under the following license: Creative Commons: Attribution-NonCommercial-ShareAlike. This license lets others remix, tweak, and build upon this content non-commercially, as long as they credit the author and license their new creations under the identical terms. Please note that content linked from this page may have different licensing terms.