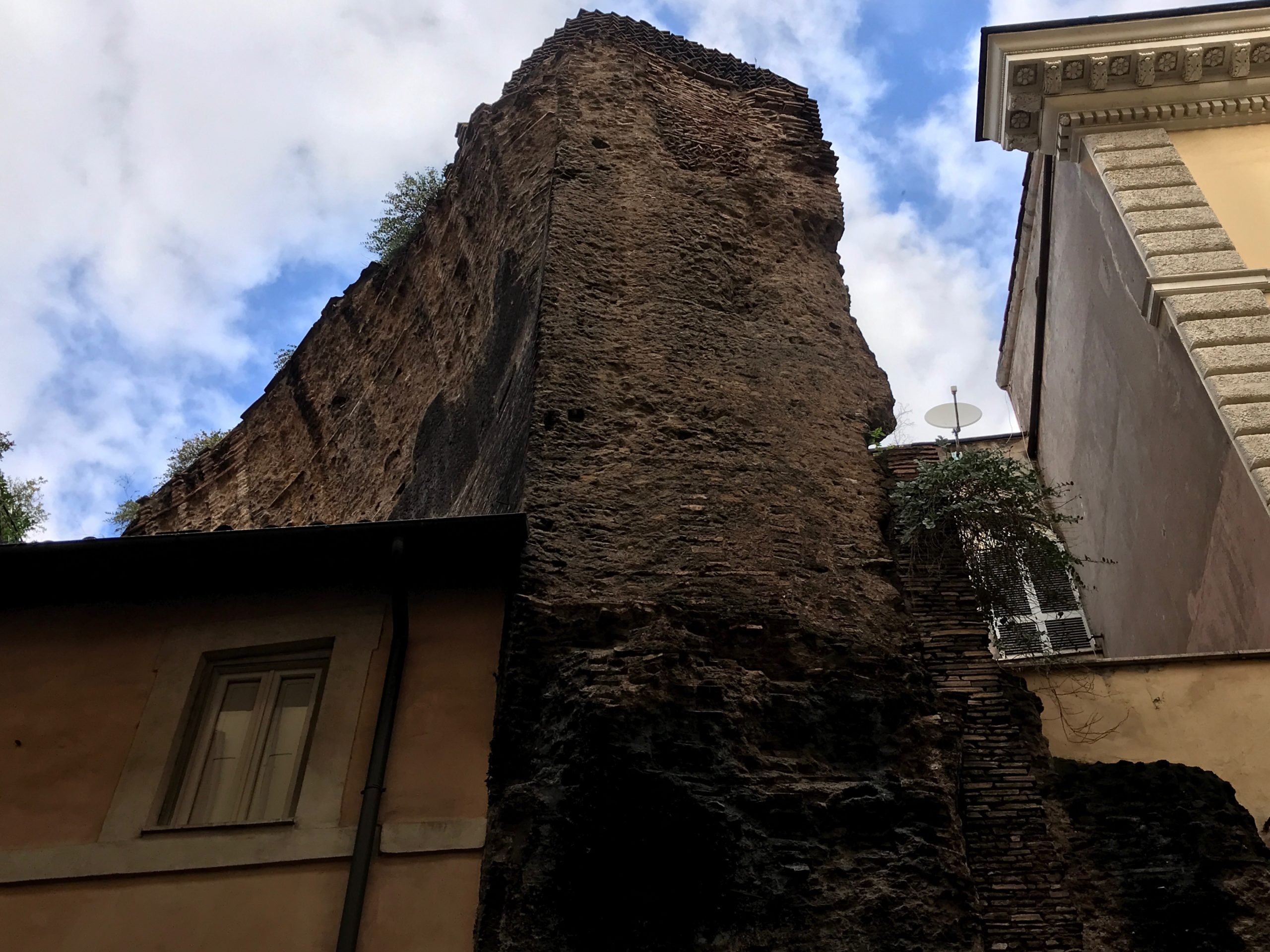 Located on Via dell’Arco della Ciambella (donut street!) the imposing remains have long ago been incorporated into the modern buildings.  The massive round wall was part of the hall (diameter 25 m) of the extensive Baths of Agrippa complex, although this portion was rebuilt in the Severan period.  The dome has not been preserved, but the plans drawn by Peruzzi and Palladio record the earlier period in which much of the complex was intact.

THERMAE AGRIPPAE, * (Agrippianae, Not.; Greg. Magn.): the earliest of the great baths of Rome. According to Cassius Dio (liii. 27. I) Agrippa built a hot-air bath (τὸ πυριατήριον τὸ Λακωνικόν) 1 in 25 B.C. at the same time as the PANTHEON (q.v.); and at his death in 12 he left to the Roman people, for their free use, a βαλανεῖον (liv. 29. 4; Sid. Apoll. carm. 23. 496: balnea.. quae Agrippa dedit). As the AQUA VIRGO (q.v.), which supplied these baths with water, was not completed until 19 B.C., it is probable that the laconicum was the original part of what afterwards became a complete establishment for bathing, which was then regularly called thermae. Agrippa adorned these baths with works of art, among which are mentioned paintings (Plin. NH xxxv. 26), and the Apoxyomenos of Lysippus, which was set up in front of them (id. xxxiv. 62). The hot rooms he is said to have finished with fresco on tiles (id. xxxvi. 189).

The thermae were burned in 80 A.D. (Cass. Dio lxvi. 24: βαλανεῖον), but must have been restored by Titus or Domitian, for they are mentioned by Martial (iii. 20. 15, 36. 6) as much frequented. Another restoration was carried out by Hadrian (Hist. Aug. Hadr. 19: Romae instauravit lavacrum Agrippae; cf. also a reference in CIL vi. 9797=AL 294). An inscription (vi. 1165) of 344/5 A.D. recording a restoration by Constantius and Constans of ‘termas vetustatelabefactas‘ was found near the church of S. Maria in Monterone close’ to the west side of the baths of Agrippa, and therefore probably refers to them. They are mentioned in the Regionary Catalogue (Reg. IX), by Sid. Apollinaris (loc. cit.), and in the sixth century (Greg. Magn. Reg. vi. 42; ix. 137; Kehr i. 98). By the seventh century the destruction of the building was well under way, and that its marble was burned into lime is shown by the name Calcararium, applied to the immediate vicinity somewhat later (Mirabilia 23; Jord. ii. 439; LS i. 25). They are, however, mentioned as Thermae Commodianae in Eins. 1. 4; 2. 4; 4. 8; 8. 6.

The general plan of these thermae is known from a fragment of the Marble Plan found in 1900 (NS 1900, 633-634; BC 1901, 3-19; LS ii. 209; Mitt. 1905, 75); from drawings and plans of the sixteenth century (NS 1882, 347-351) when much of the structure was still standing-three 519,/PAGE> in particular, one of Baldassare Peruzzi (Uffizi 456  2; Geymiuller, Documents inedits sur les thermes d’Agrippa, Lausanne 1883; NS 1882, pl. xxi.), a second of Palladio in the Devonshire collection (port. ix.f. 14; Rossi’s edition of the Terme dei Romani, Vicenza 1797, pl. ii.; BC 1901, pi. ii.), and a third of S. Peruzzi (Uffizi 642); and from the meagre results of excavations (cf. NS 1881, 276-281; 1882, 351-359). From this evidence it appears that the building of Agrippa was oriented of the north and south on the axis of the Pantheon, and covered an area measuring about 100-120 metres north and south and 80-100 east and same west, extending from the modern Via di Tor Argentina on the west to the east side of the Via dei Cestari, and having its southern limit a little north of the Corso Vittorio Emanuele. Just north of the centre of the building was a circular hall about 25 metres in diameter, belonging to a later reconstruction in a period not earlier than Alexander Severus(RA 127, 128; 175, 176), with the earliest known example of meridian ribs in its dome, the arco della Ciambella, by which name it was known as early as 1505 (BC 1901, 16), shown in sketches of the seventeenth century (e.g. that of Giovannoli, BC 1901, pl. iv.) when it was still complete. It is now only partially preserved and is visible behind the houses in the Via dell’ Arco della Ciambella. It was probably a sort of general assembly hall, the social centre of the baths. The arrangement of the other rooms is uncertain, but the caldarium was probably directly west of the circular hall. On the west side of the thermae was an artificial pool or STAGNUM (q.v.). The plan is very like that of the larger thermae(the so-called palace) at Treves (Trier), as the restoration by Williams shows (ASA 100).

The original structure of Agrippa was afterwards extended north by Hadrian, and connected with the Pantheon by a series of halls, of which only small sections have been found (NS 1877, 271; 1878, 93; 1881, 278;1886, 159; BC 1886, 219; LS ii. 236; Mel. 1885, 3 ff., pi. i), except in the case of that directly adjoining the Pantheon. This hall is wrongly called Laconicum by Lanciani, for there are no traces of heating arrangements. Its real purpose is uncertain; Hulsen conjectures that it is to be identified with the library which Julius Africanus erected for the emperor Alexander Severus. But the passage in Oxyrhynchus Papyri (iii. p. 39)3 which he cites, .though it is certainly ambiguous, would seem to refer rather to the THERMAE ALEXANDRINAE (NERONIANAE), q.v., the which were close by–ἐν ῾Ρώμῃ πρὸς ταῖς᾿Αλεξάνδρου θερμαῖς ἐν τῇ ἐν Πανθείῳ βιβλιοθήκῃ τῇ καλη? ἣν αὐτὸςἠρχιτεκτόνησα τῷ Σεβαστῷ. From the brickstamps cited by Hulsen, it would seem that the hall itself must also belong to the period of Hadrian, as he maintains; and this is borne out by the character of the frieze and cornice. Cf. Toeb. i. 67-72. The hall, now cut through by the Via della Palombella, was rectangular in shape, 45 metres long and 19 wide, with an apse 9 metres in diameter in the north wall. Along each of the longer sides stood four columns of pavonazzetto and red granite. Between the first and second and the third and fourth columns on each side were three niches, two rectangular and one semi-circular. Round the hall ran a remarkably well executed frieze and cornice, some of which is in situ (Durm, fig. 437; D’Esp. Fr. i. 78). The walls are 1.75 metre thick. The cross-walls between the north wall of this hall and the drum of the Pantheon date from 126 or later (AJA 1912, 421), and as they are not connected with either structure but simply abut against them, it is clear that they were intended to serve as buttresses, perhaps in order that a heavy roof might be put over the hall.

For the thermae, see HJ 576-580; RE i. 899; and especially Hulsen, Die Thermen des Agrippa, Rome 1910, which contains reproductions of the plans cited above as well as others, and a definite discussion of the whole structure.

3 No. 412-a fragment of book viii. of the Keoroi of Africanus himself.

Where in Rome is the Arco della Ciambella?