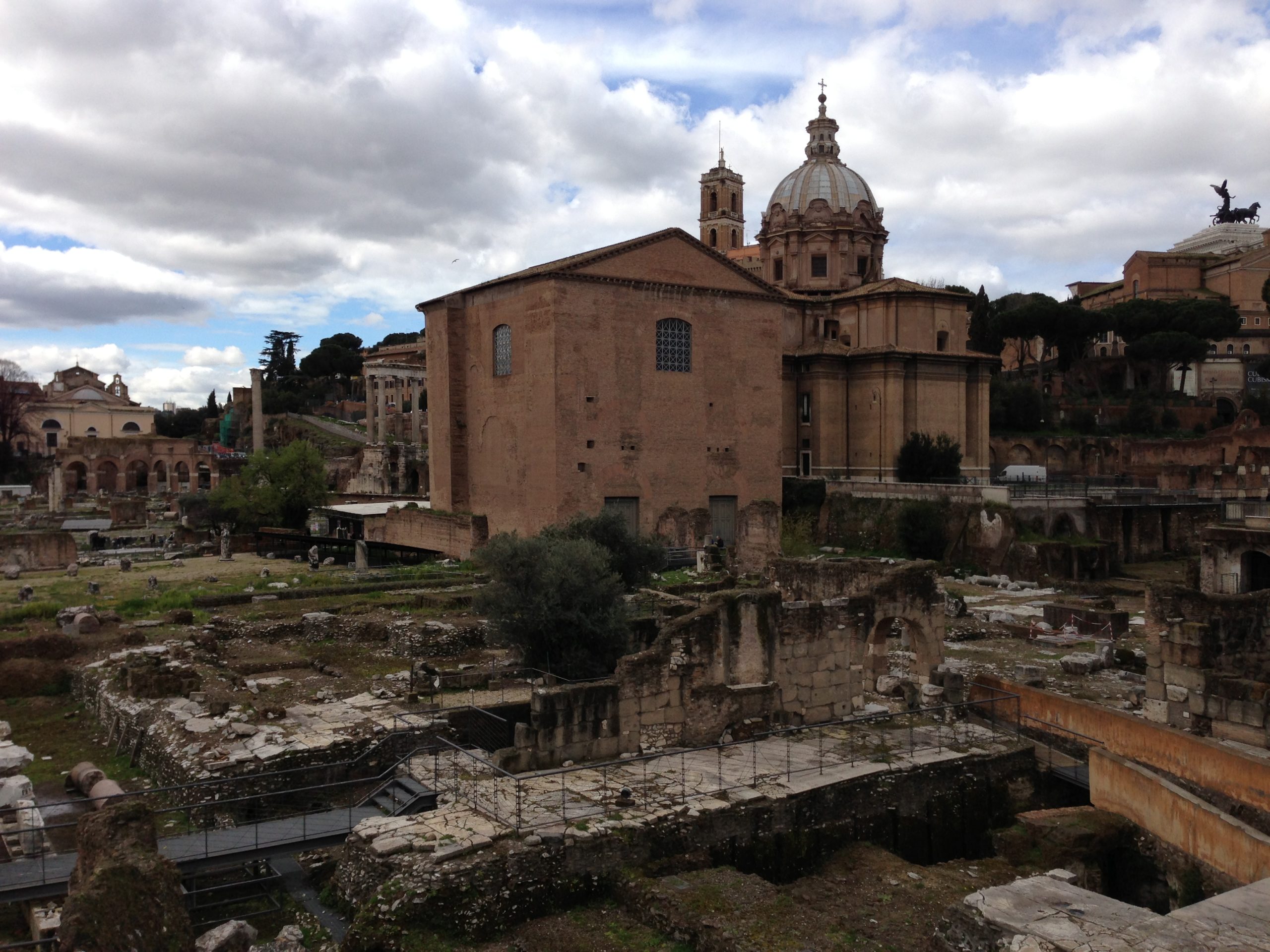 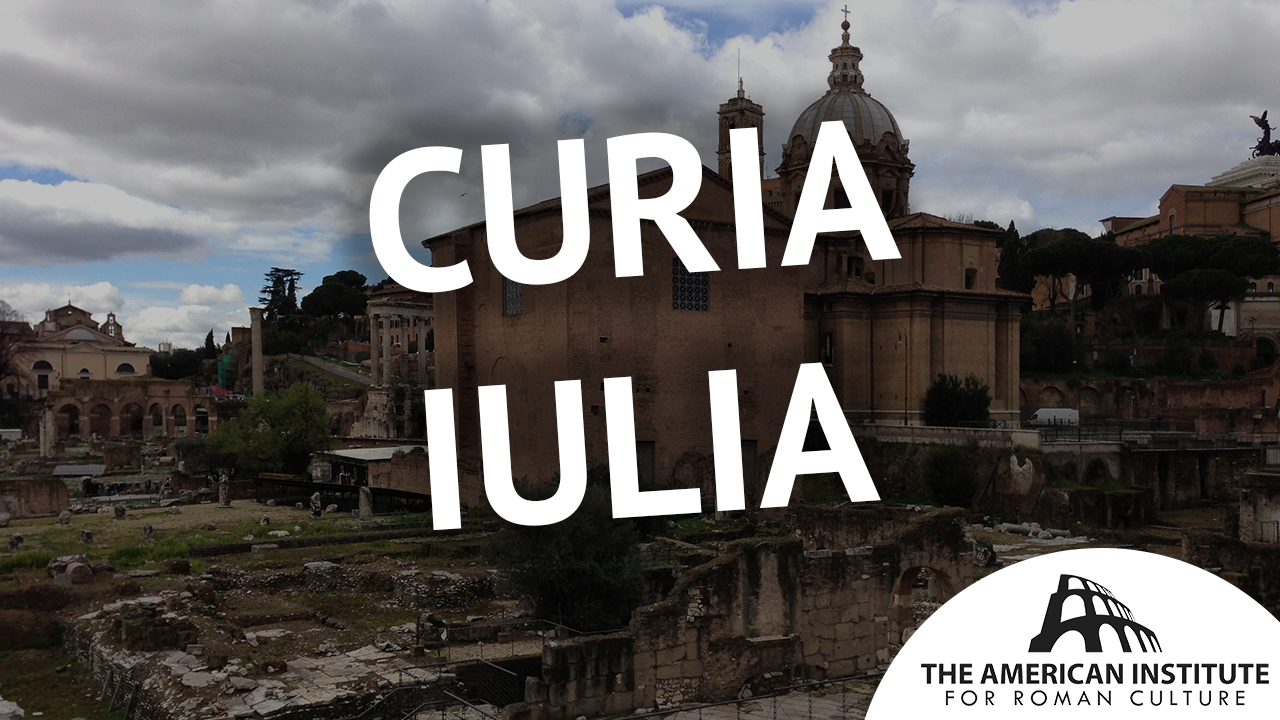 The Curia Iulia is one of the best-preserved monuments in the Roman Forum. It was constructed as an inaugurated space (temple) to accommodate the Roman Senate inside. What you see is a rebuilding after the fire of AD 283 of the Curia built by Augustus. The Curia was converted into a church 7C AD, then freed of the accreted Church architecture in the Fascist era.

The curia Iulia, like the older curia, was built in comitio (Plin. NH xxxv. 27, 131); in fact several senatus consulta which have come down to us in their Greek form state that they were voted ἐν κομετίῳ; one under Hadrian, however, is more explicit (in comitio in curia, EE ii. 273, 282).

Domitian restored the curia in 94 A.D. (Hieron. 161), and it was no doubt he who took the opportunity of dedicating the Chalcidicum to his patron goddess Minerva, whence it acquired the name of Atrium Minervae (Notit. Reg. VIII). This curia is represented in the famous Anaglypha Traiani (see ROSTRA). It is perhaps also represented in one of the reliefs of the arch of Benevento (Mitt. 1892, 257; SScR 194). The curia was burnt down in the fire of Carinus, and rebuilt by Diocletian (Chron. 148), and the existing building dates from his time.

The curia proper is a hall 25.20 metres by 17.61 metres, of brick-faced concrete, with a huge buttress at each angle; the lower part of the front wall was decorated with slabs of marble, while the upper part (like the exterior of the thermae of Caracalla and Diocletian) was covered with stucco in imitation of white marble blocks with heavily draughted joints. The travertine consoles and the brick cornice which they support (which are continued round the triangular pediment) were also coated with stucco. A flight of steps led up to the entrance door, to which belonged an epistyle bearing the inscription: [i]mperant[e… [n]eratius in… [c]uriam sen[atus]… The second line no doubt contained the name of an unknown praefectus urbi (fifth century). When the building became a church, a metrical (?) inscription was painted over it, of which only the first word, aspice, is preserved. Over the door were three large windows. A small portion of the pavement of the interior, of various coloured marbles, was recently exposed to view, but covered up again.

The marble facing of the internal walls was destroyed in 1562 (LR 266; LS iii. 221 (for details, see Archivio Boccapaduli Arm. ii. Mazzo iv. 46. 10). The brick facing of the exterior and the cornice were coated with stucco to represent marble (ib.), just as was the case in the Thermae of Diocletian.

The church of S. Adriano was founded in the curia by Honorius I (625-638; LP lxxii. 6), who added the apse. It is called in tribus fatis from a group of the three fates which stood near the temple of Janus (Jord. i. 2. 259, 349; BCr 1912, 146; HC 24, 26; HCh 260-261). After this several bodies were buried in niches cut in the front wall, in the concrete core of the steps, and in front of them, on the pavement of the comitium. The doorway, 5.90 metres in height, probably remained in use until after the fire of Robert Guiscard the Norman in 1087, when its level was raised by 3.25 metres: and so it remained (with steps descending into the church from the higher ground outside) until the restoration of the church in 1654, when it was raised again by about the same amount. When the ancient bronze doors were removed to the Lateran by Borromini a few years later, various coins were found inside them, among which was one of Domitian. Between 1654 and the end of the nineteenth century there has been another rise in level of about 1 metre.

To the left of the curia was the CHALCIDICUM or Atrium Minervae (q.v.) (the last remains of which disappeared when the Via Bonella was made in 1585-90), a courtyard with a colonnade running down each side; while to the north-west again was the Secretarium Senatus, a hall measur- ing 18.17 by 8.92 metres, with an apse at the north-east end. An inscription shows that it had been restored by Junius Flavianus in 311 A.D. and that it was repaired in 412 A.D., after its destruction by fire, by the then Praefectus Urbi, Epifanius (CIL vi. 1718). The passage of Cassiodorus, Var. iv. 30, curvae porticus, quae iuxta domum palmatam (q.v.) posita, forum in modum areae decenter includit, etc., referred by Jord. i. 2. 257, 258 to the apse of this building, should more probably be taken to signify the south-western hemicycle of the forum of Trajan (BC 1887, 64-66; 1889,363; 1899, 88).

The ancient basilica of S. Martina, built in the ruins of the Secretarium Senatus, is first mentioned under Hadrian I (772-795; LP xcvii. 51, 96). It is called S. Martinae sita in tribus fatis under Leo III (LP xcviii. 90; HCh 381). It was restored by Pietro da Cortona in 1640 and its level raised, so that the older structure (in which no traces of antiquity are actually visible) serves as the crypt.

Where in Rome is Curia Iulia? 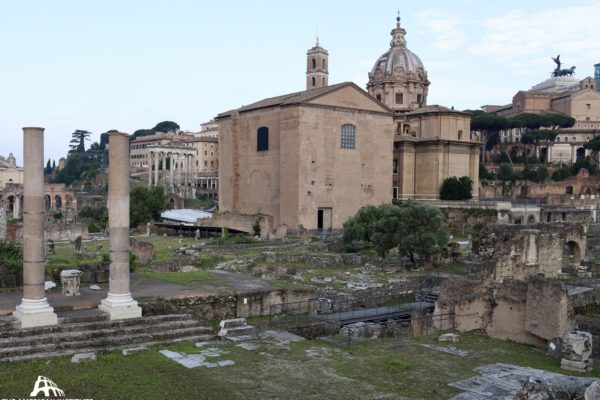 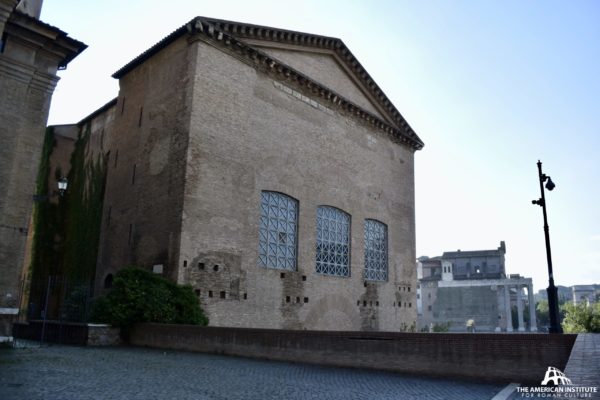 Created by The American Institute of Roman Culture, published on 08/28/2021 under the following license: Creative Commons: Attribution-NonCommercial-ShareAlike. This license lets others remix, tweak, and build upon this content non-commercially, as long as they credit the author and license their new creations under the identical terms. Please note that content linked from this page may have different licensing terms.