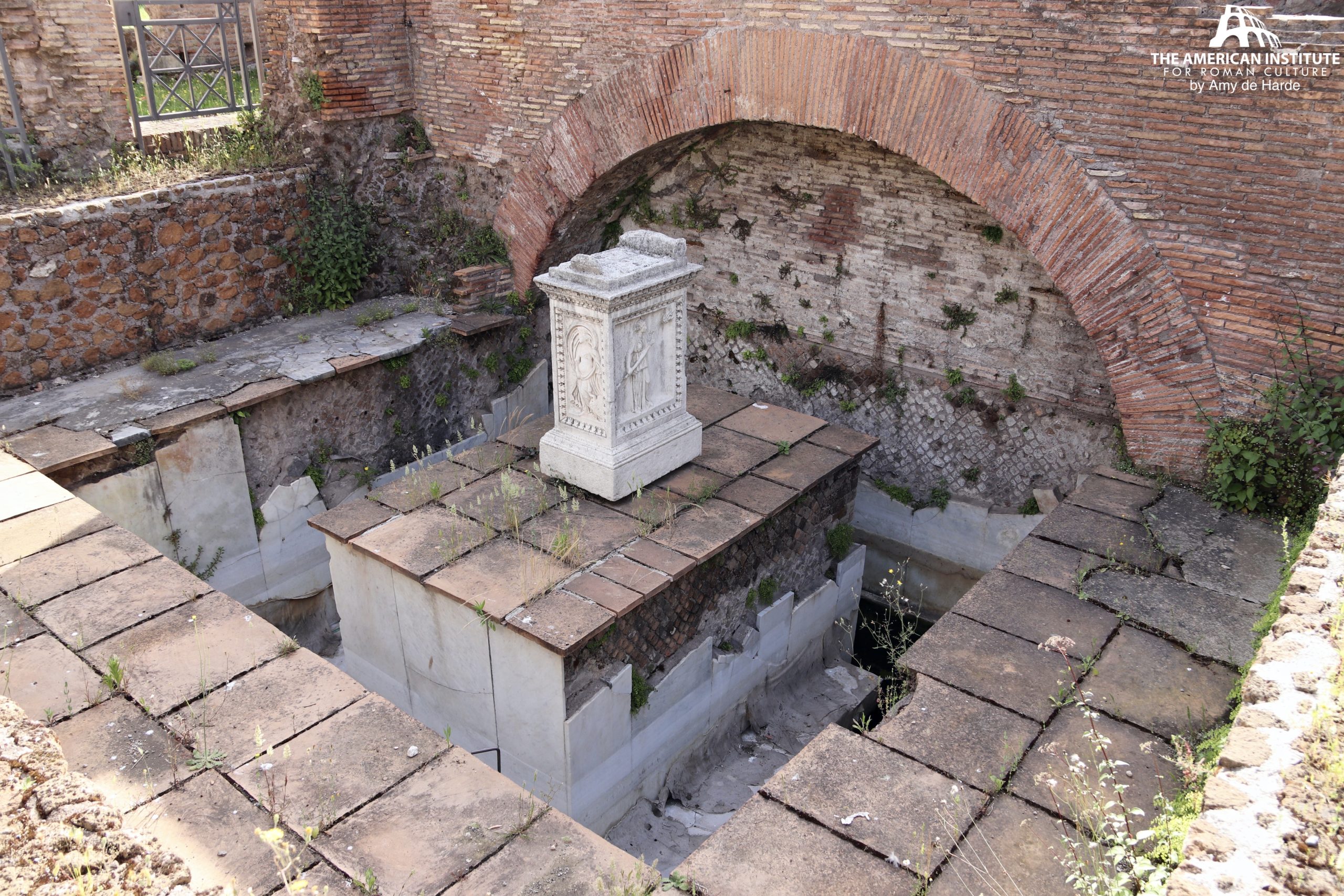 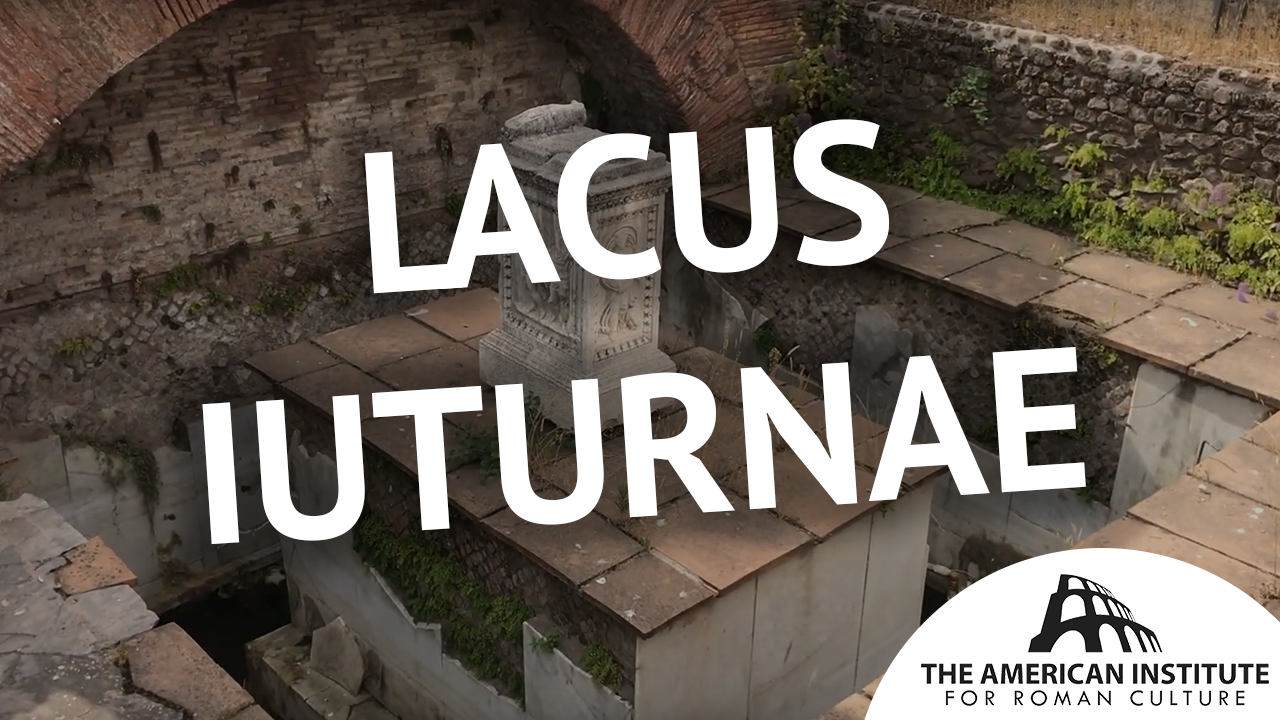 The Lacus Iuturnae is a natural stream of great value and history for the ancient Romans. It was an important water source in the nascent forum, and attributed to a nymph, who was the sister of Turnus, Aeneas’ arch foe in the Aeneid. The Battle of Lake Regillus, won in 499 BC, was followed by two youths on horseback arriving in the forum, watering their horses at the spring, and disappearing. As a result the temple was built to Castor and Pollux, next to the spring. The spring flowed throughout the Republican and Imperial periods, seeing its last restyling of the pool area under Trajan. In the Christian Era, its association with healing properties continued, now tied to the places of worship nearby; Oratory of the 40 Martyrs and Santa Maria Antiqua. 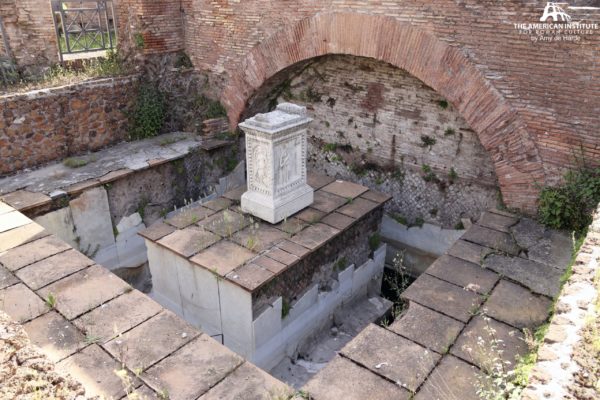 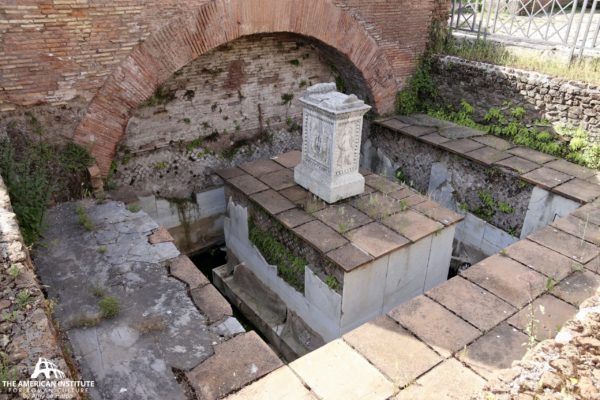 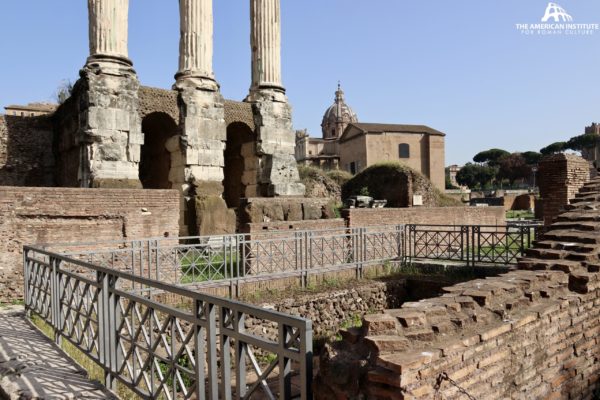 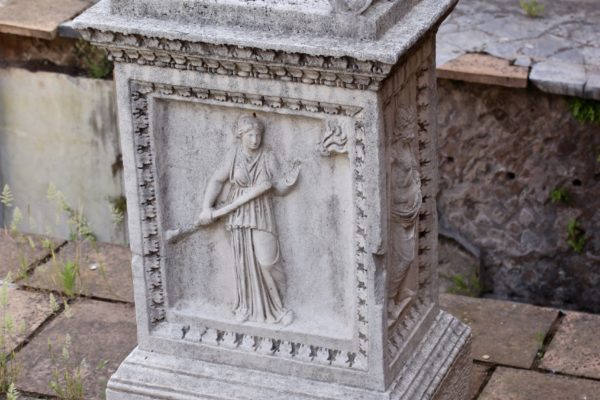 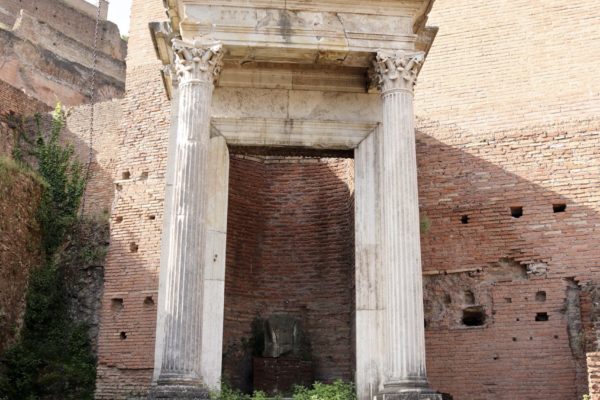 This part of the forum was buried deep in rubbish (LS ii. 202) until 1900, when the ‘precinct’ of Juturna was entirely excavated (NS 1900, 291-295; 1901, 41-144; BC 1900, 67-74, 285-295; 1903, 166-198; CR 1901, 139; Mitt. 1902, 67-74; 1905, 81-82; Atti 530-539; HC 164-170; Thed. 120-121, 279-280; P1. 214-220; ZA 96; DR 236-243; RE Suppl. iv. 476-9). The ruins belong principally to the imperial period, but there are some of earlier date. The lacus itself is a basin 2.12 metres deep, the bottom of which measures 5.13 by 5.04 metres. In the middle of this basin is a quadrilateral base 1.78 metres high and about 3 long by 2 wide, which probably supported marble statues of the Dioscuri with their horses, remains of which, broken into many fragments, were found (they are probably South Italian works of the fifth century B.C.). The basin is paved with marble slabs, beneath which is a considerable extent of tufa pavement with a different orientation (that of the precinct of Vesta) belonging to the earlier structure, and lying at about o1.90 metres above sea-level (JRS 1922, 5, 21). The lower walls of opus reticulatum rise to the same height on three sides as the base just mentioned, which appears to have been the level of the precinct in republican times. On this wall is a ledge about 1.50 metres wide, and round this a later wall of opus incertum, 1.23 metres high, with travertine curbing and indications of a metal balustrade. At the top the basin measures about 10 metres square. The whole inner surface of the basin was lined with marble, and at the north-east and north-west corner of its pavement are the two springs by which it has always been fed. The east side of the basin was entirely changed by being built over in the fourth century, in order, apparently, to provide quarters for the STATIO AQUARUM (q.v.). An altar with representations of the Dioscuri and Helen (as Selene) with Jupiter at one end and Leda on the other, which was found in the basin, is probably Hadrianic (SScR 233). About 4 metres south of the lacus is an altar on which are sculptured a male and female figure (no doubt Juturna taking leave of Turnus) in the style of the time of Severus; a well with marble curb or puteal, on which is an inscription that records a restoration and dedication by M. Barbatius Pollio, probably the partisan of M. Antonius (Mitt. 1902, 70; Klio 1902, 233-234); and an aedicula, consisting of a cella and pronaos, with two marble columns. A statue of the goddess undoubtedly stood in the apse of the aedicula, and a fragment of the epistyle was found near by, inscribed IVTVRNAI S (Klio, loc. cit.). The aedicula of Juturna abuts against a room with an apse of good Hadrianic brickwork, which lies in the axis of the Nova Via. In Christian times it became an oratory of the Forty Martyrs of Sebaste (Mitt. 1902, 82; 1905, 85, 86; HC 160-161). Cf. HFP 39, and add. to MINERVA, TEMPLUM.

Just east of the lacus, between it and the wall of the atrium Vestae, a ramp ascended from the forum to the Nova via, and the intervening space was occupied by several chambers of later construction, one of which was built out over part of the lacus itself. In these rooms were found fragments of inscriptions relating to the curatores aquarum and the statio aquarum, or headquarters of the water department of Rome (NS 1900, 293; 1901, 129-131; BC 1900, 72; Mitt. 1902, 72-73; Klio 1902, 235; Thed. 311-312). One of these inscriptions, on the pedestal of a statue dedicated to Constantine on Ist March, 328, records the restoration of the statio at that time by the curator aquarum, Fl. Maesius Egnatius Lollianus. It is therefore probable that the statio occupied these rooms as offices in the fourth century, but how much earlier is not known. A statue of Aesculapius, another of Apollo (fifth century B.C.） and other sculptural remains, found in this precinct, lend some support to a theory that in the second and third centuries there was some sort of a sanatorium of Aesculapius established here (Neue Jahrb. cit., 384- 388); and in the early Middle Ages the springs were still used, as is shown by the large number of jugs of the eighth century which have been found.

Where in Rome is the Lacus Iuturnae?

Created by The American Institute of Roman Culture, published on 03/06/2020 under the following license: Creative Commons: Attribution-NonCommercial-ShareAlike. This license lets others remix, tweak, and build upon this content non-commercially, as long as they credit the author and license their new creations under the identical terms. Please note that content linked from this page may have different licensing terms.