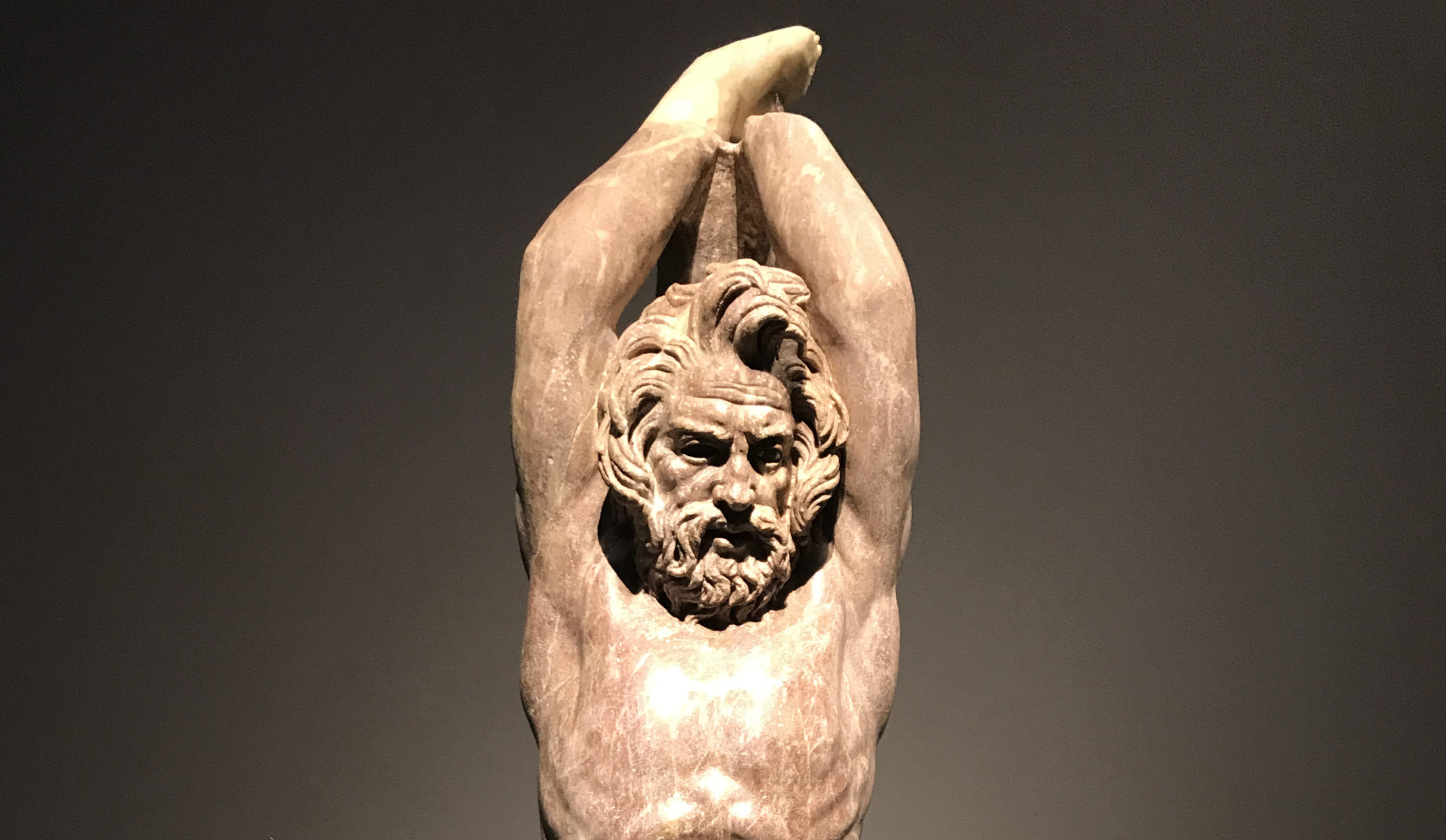 Rome's best kept archaeology secret. Shhhh! Nestled between the Pyramid of Cestius and S Paul's outside the walls is the magnificent Centrale Montemartini of the Capitoline Museums collection. This extraordinary assembly of statues, mosaics, tombs is nestled amidst Rhe stunning backdrop of early 20th century generators that once powered Rome's lights. Above all I love it because pretty much all of the artifacts are from Rome-and we know their specific find contexts, elevating this museum well beyond being an art collection. (By the way my team and I - leading Villa delle Vignacce dig in 2009- discovered the statue of Marsyas, which is on permanent display.) Newly added: Pius IX's papal train! #discoverMiC #MiCRoma #meetrome #ancientromelive

This Comune di Roma museum was created as an annex of the Capitoline Museums collection. Located on the Via Ostiense, the rich collection is housed in the remains of a nineteenth century power plant located to advantage of water from the Tiber River. The project was created in 1997 for an exhibit “Gods and Machines” that successfully contrasted the marble statuary with the massive diesel engines in a series of rooms, each space highlighted by a different color of subtle tones. It remains an impressive example of repurposed architecture and industrial archaeology, providing an engaging setting for an otherwise unseen portion of the Capitoline Museums collection, and it has become a favorite of archaeologists and teachers worldwide for its inspiring setting, natural lighting, and rich variety of materials (marble and tuff statuary, mosaics and frescoes, reliefs and architectural constructs from central monuments in Rome as well as important garden estates known as horti). The collection is organized into three main areas, and visitors move through the spaces with artifacts arranged in chronological order.

The power plant was was inaugurated in 1912, located at the time outside the city limits, and close to the Tiber River bank, for an easily accessible supply of water for the diesel engine and turbo-steam machines.  Spared any damage from bombing during World War II (the structure was disguised as a papal building, replete with papal flags), the plant continued in use until it was superseded in the early 1960s. Turbogas units were retrofitted next to the defunct structure in the early 1970s, but the space otherwise remained out of use, until the city began to renovate it in 1989/1990 for a conference space and then as a secondary space for the massive Capitoline Museums collection, which opened in the late 1990s.  The space soon became a permanent museum, part of the Musei in Comune.

The museum has three main sections. On the ground floor is the Column Room, which hosts the Archaic and Republican period pieces.  Upstairs, there are two rooms.  The Machine Room, with the massive diesel engine as backdrop, accommodates statuary and monuments found in the center of Rome. The third and final room, the Furnace Room, hosts statuary and mosaics found in the outer garden estates, mostly in the Esquiline Hill area.   The bulk of the finds on display throughout were found in the late nineteenth century, during the period of the Unification of Italy, which was followed by massive new urbanization of the city.  At that time, countless. Medieval period and later structures were destroyed for new, modern buildings, which led to a treasure trove of discoveries, oftentimes ancient statuary caches that had been hidden away or smashed and used as building material of the Middle Ages.

In the Column Room, the collection documents the Archaic period with a series of tombs and grave goods from the Esquiline necropolis, already rich with some Greek imports as well as tuff-made urns and tombs. From the third century BCE the necropolis has also preserved an important fresco of the gens Fabia, which shows a narrative on multiple, stacked registers.  This is an important precursor to the second century CE Trajanic Column narrative frieze.  From the Via Tiburtina, near the church of S. Lorenzo, there was found an impressive series of tuff sculptures of the third-second century BCE, possibly associated with a sanctuary of Hercules. The seated barbarian woman suckling a baby and Hellenistic-era gaze of the some of the figures underlines the skill of local Italic artisans carving with local materials though with references to examples from the Hellenic world.  The space also includes refined Hellenistic-era mosaics from a domus of Via Panisperna, and concludes with a series of  freedmen and freedwomen tombs of the first century BCE, in addition to the Togate Barberini and famous portraits including Augustus and Agrippa.

The Machine Room has public works that span from the Late Republic to the early imperial period.  From the Campus Martius there is the colossal cult statue of Fortuna Huiusce Diei (Fortune of this day) from Temple B in Largo Argentina, consisting of a head, arm, and sandaled foot.  A marble seated muse may pertain to the portico of the Theater of Pompey complex.  From the nearby Circus Flaminius, at the southern end of the Campus Martius, there is a colossal figure of Jupiter, possibly part of the Jupiter Stator temple.  Further south of the circus was the Augustan era Temple of Apollo Sosianus.  A substantial portion of the museum showcases a reconstruction of the pedimental group, purportedly made of spoliated Classical statuary from mainland Greece, depicting an Amazonomachy- Hercules and Theseus against the Amazons. There are also reconstructions of the marble interior space, with large portions of the interior frieze, depicting triumphal processions and a battle scene in Luna marble.  Also from the area, there is a marble monument, probably a fountain or perirrhanterion, of the Flavian era, reconstructed in part in the museum, with the inscription preserved along with carved bucrania decoration. From the Capitoline hill, the carved reliefs of dark stone (possibly from North African) depicting victory figures, armor and eagles once decorating a statue base found on the Capitoline Hill may be pertinent to the famous Bocchus Monument.  Bocchus was the king of Mauretania who sided with Rome against Jugurtha in 106 BCE, and he was recorded by the literary sources as having made a dedication on the Capitoline.  Other statuary in the room include the two dark stone statues found on the Caelian hill.  One, of Agrippina the Younger (wife of Claudius) was made of black basanite stone (a kind of basalt), and may have decorated the Temple of Claudius on the Caelian.  The other statue, of Victory, was made of bigio antico marble; it has been associated with the late antique domus of Symmachus, located on the Caelian.  More recently, the statue has been identified as Isis, whose sanctuary was present on the northern portion of the Caelian hill.

The Furnace Room is largely dedicated to the Garden estates (horti) and private residences, with a small collection of sarcophagi and marble tombs of note. A lot of material has been attributed to the Gardens of Sallust, a Republican estate that became the property of Julius Caesar and thereafter a well known and famously decorated property of the Roman emperor for centuries.  A number of classical era fifth century BC statues (i.e., kneeling Amazon, winged Nike) found in the area have been identified as imports acquired for highlighting the sophisticated taste of various imperial owners.  On the Esquiline hill, most famously were the finds associated with the Gardens of Maecenas, friend and advisor of Augustus.  This property also eventually passed into imperial ownership, attached in part of the Domus Aurea property.  Other properties that passed on to imperial ownership included the Horti Lamiani, Horti Tauriani, and Hort Liciniani, associated with the emperor Gallienus. This area included the discovery of a father and son of the late fourth century CE, who are in the act of dropping a handkerchief, the signal for the start of a chariot race.  The museum also contains the remains of a massive polychromatic mosaic from S. Bibiana, which depicts the hunting and capturing of wild game like boar and bear for the public hunt spectacles (venationes), usually held in the Circus Maximus. A series of refined statuary from the Domus of Fulvius Plautianus, Domus of Via Cavour, and Domus at Porta San Lorenzo is followed by a number of impressive funerary monuments, most importantly the Porta Salaria tomb of Sulpicius Maximus, a young poet who won the Domitianic era poetry contest in 94 CE then died shortly thereafter.  His poem is carved in full on the monument.

The most recent addition to the museum is the three- quarter life-size hanging Marysas figure of red marble, which was found in 2009 in the remains of the Villa delle Vignacce in the Park of the Aqueducts by Via Lemonia,  It is of extraordinary quality, of the Antonine era, with one bronze inlaid eye intact. The statue was discovered during the excavations (2006-2009)  led and financed by the American Institute for Roman Culture, with a grant from the American Express Foundation.  The Institute and its colleagues are currently working on the manuscript for publication, which should be completed by the end of 2020.

Where in Rome is Centrale Montemartini?

Created by The American Institute of Roman Culture, published on 03/13/2020 under the following license: Creative Commons: Attribution-NonCommercial-ShareAlike. This license lets others remix, tweak, and build upon this content non-commercially, as long as they credit the author and license their new creations under the identical terms. Please note that content linked from this page may have different licensing terms.