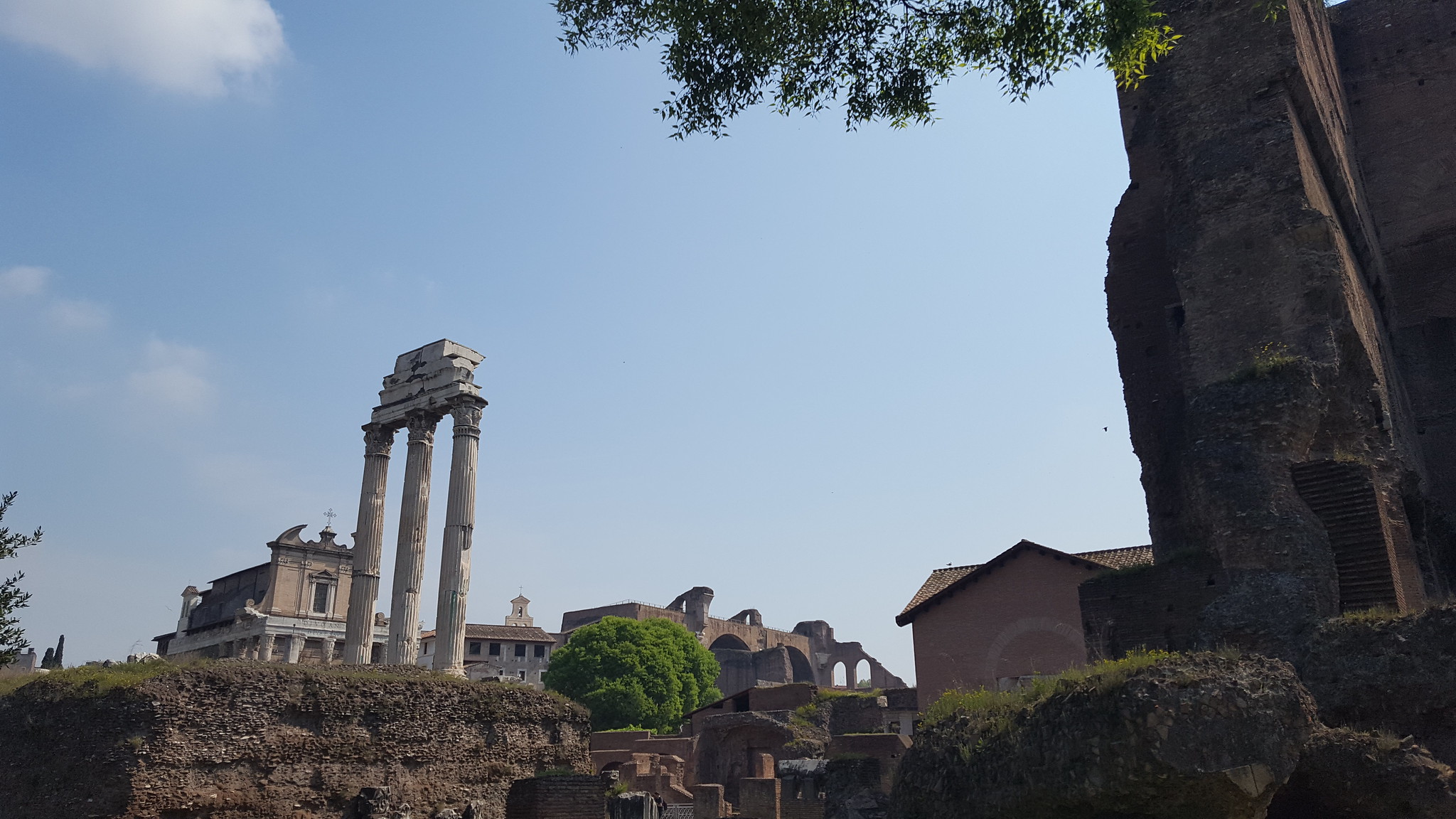 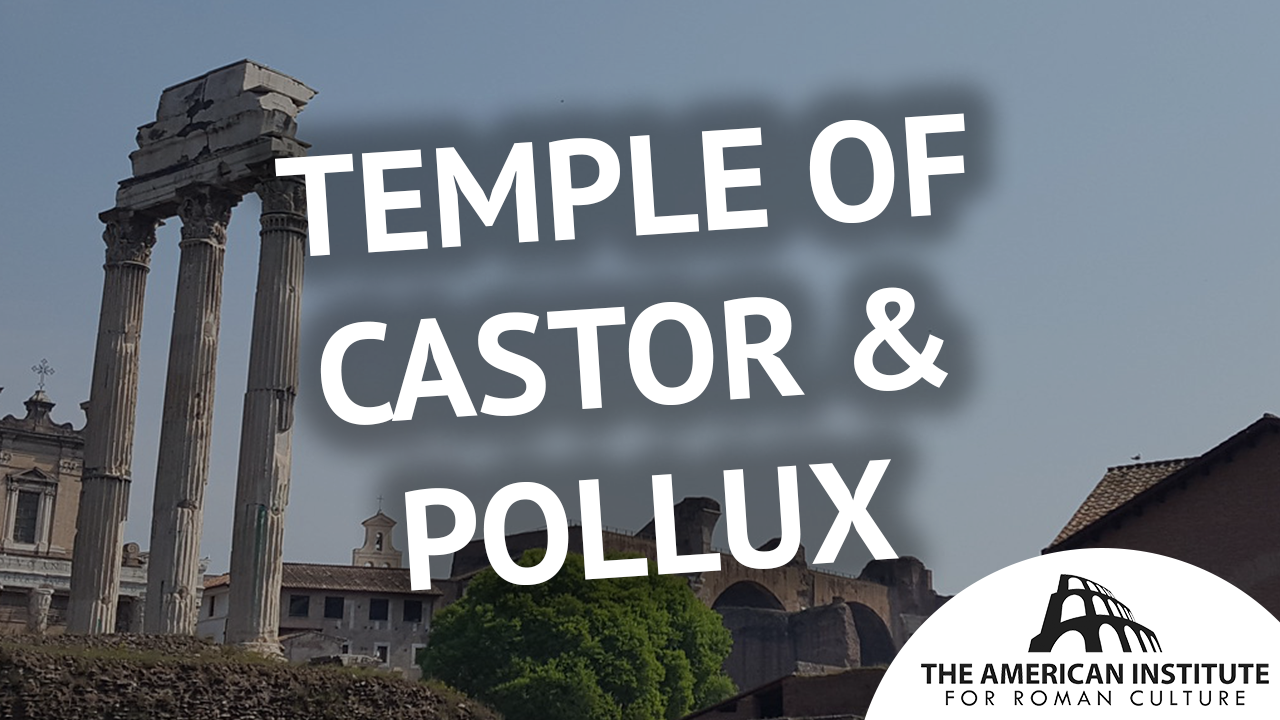 The Temple of the Castors is one of the great Republican-era temples in the Roman Forum. The Battle of Lake Regillus won in 499, Roman tradition records that two beautiful youths on horseback announced the victory in the Forum, watering their horses at the Lacus Iuturnae. Taken as a omen from the gods, the Romans then dedicated a temple to the patron gods of the equestrians with a temple next to the spring. The 5C BC temple was restored twice in the 2C BC and definitively as a massive Carrara marble temple by Tiberius for Augustus in AD 6. Three columns still stand atop the massive podium (7m high). 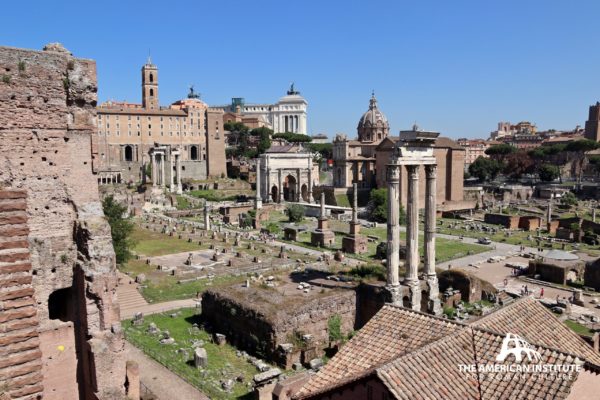 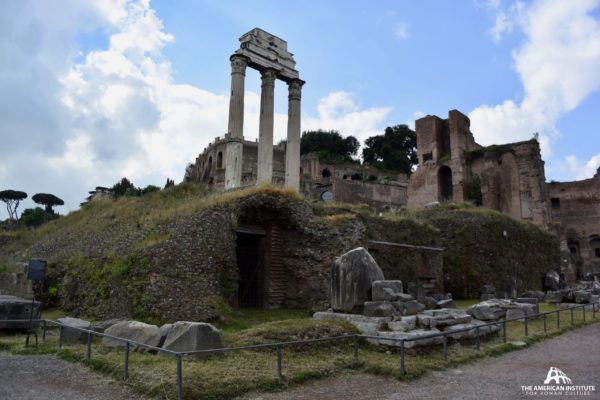 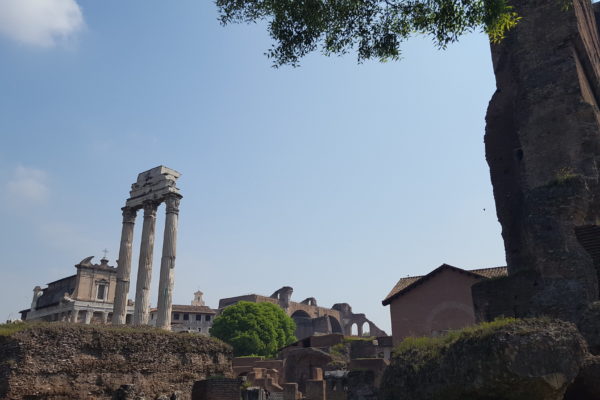 This temple was restored in 117 B.C. by L. Caecilius Metellus (Cic. pro Scauro 46, and Ascon. ad loc.; in Verr. i. 154; Plut. Pomp. 2). Some repairs were made by Verres (Cie. in Verr. i. 129-154), and the temple was completely rebuilt by Tiberius in 6 A.D., and dedicated in his own name and that of his brother Drusus (Suet. Tib. 20; Cass. Dio lv. 27. 4; Ov. Fast. i. 707-708). Caligula incorporated the temple in his palace, making it the vestibule (Suet. Cal. 22; Cass. Dio lix. 28. 5; cf. DIVUS AUGUSTUS, TEMPLUM, DOMUS TIBERIANA), but this condition was changed by Claudius. Another restoration is attributed to Domitian (Chron. 146), and in this source the temple is called templumCastoris et Minervae, a name also found in the Notitia (Reg. VIII), and variously explained (see MINERVA, TEMPLUM). It had also been supposed that there was restoration by Trajan or Hadrian (HC 161), and that the existing remains of columns and entablature date from that period, but there is no evidence for this assumption, and the view has now been abandoned (Toeb. 51). The existing remains are mostly of the Augustan period (AJA 1912, 393), and any later restorations must have been so superficial as to leave no traces.

This temple was standing in the fourth century, but nothing is known of its subsequent history, except that in the fifteenth century only three columns were visible, for the street running by them was called via Trium Columnarum (Jord. ii. 412, 501; LS i. 72, and for other reff. ii. 69, 199, 202; DuP 97). In the early nineteenth century it was often wrongly called the Graecostasis or the temple of Jupiter Stator.

Where in Rome is the Temple of Castor and Pollux?

The Architecture of Roman Temples: The Republic to the Middle Empire First 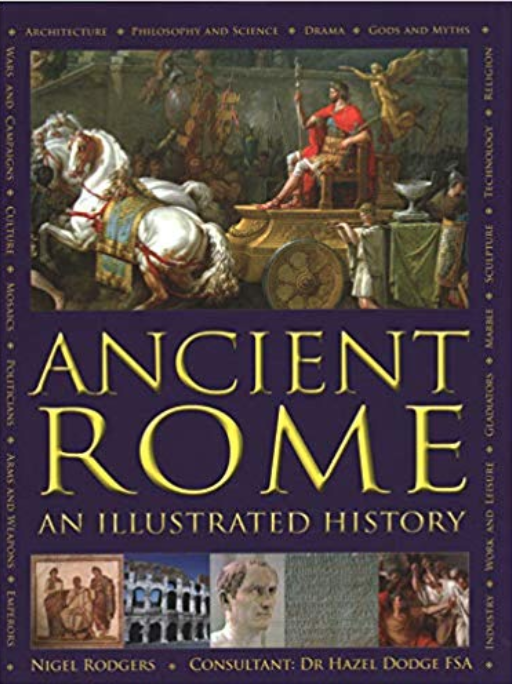 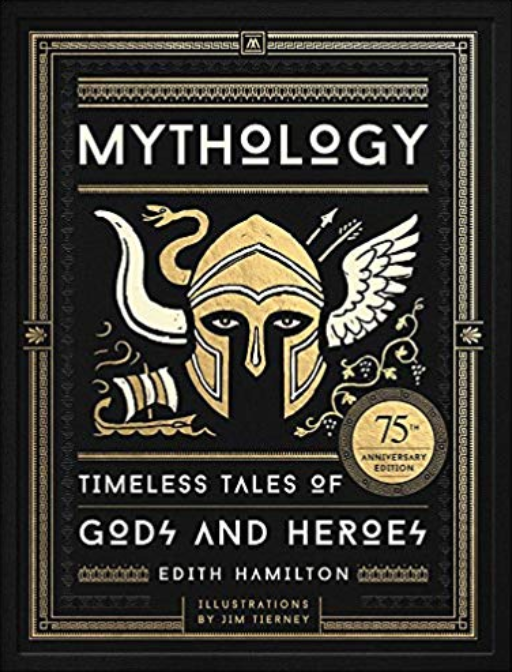 Created by The American Institute of Roman Culture, published on 01/30/2020 under the following license: Creative Commons: Attribution-NonCommercial-ShareAlike. This license lets others remix, tweak, and build upon this content non-commercially, as long as they credit the author and license their new creations under the identical terms. Please note that content linked from this page may have different licensing terms.