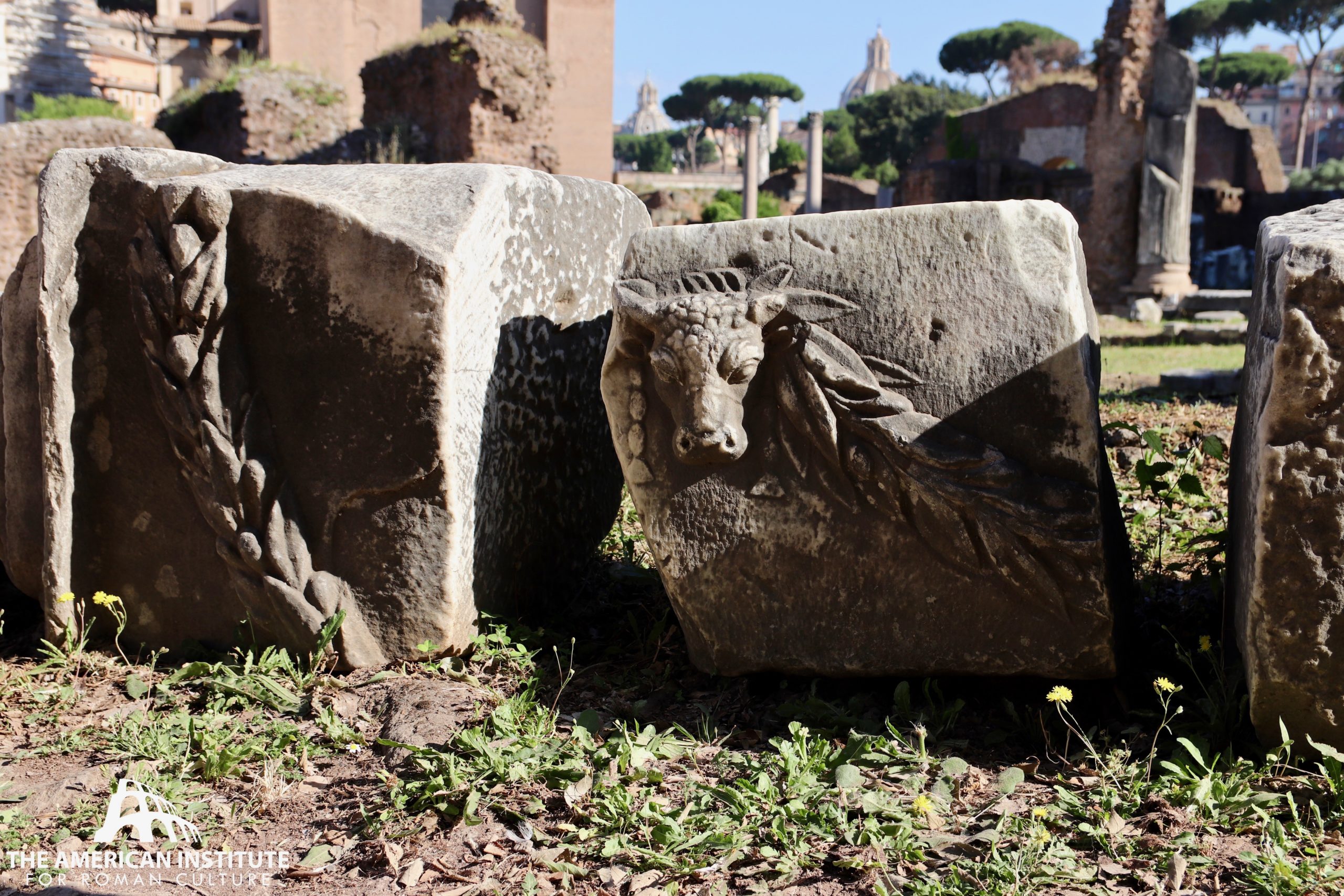 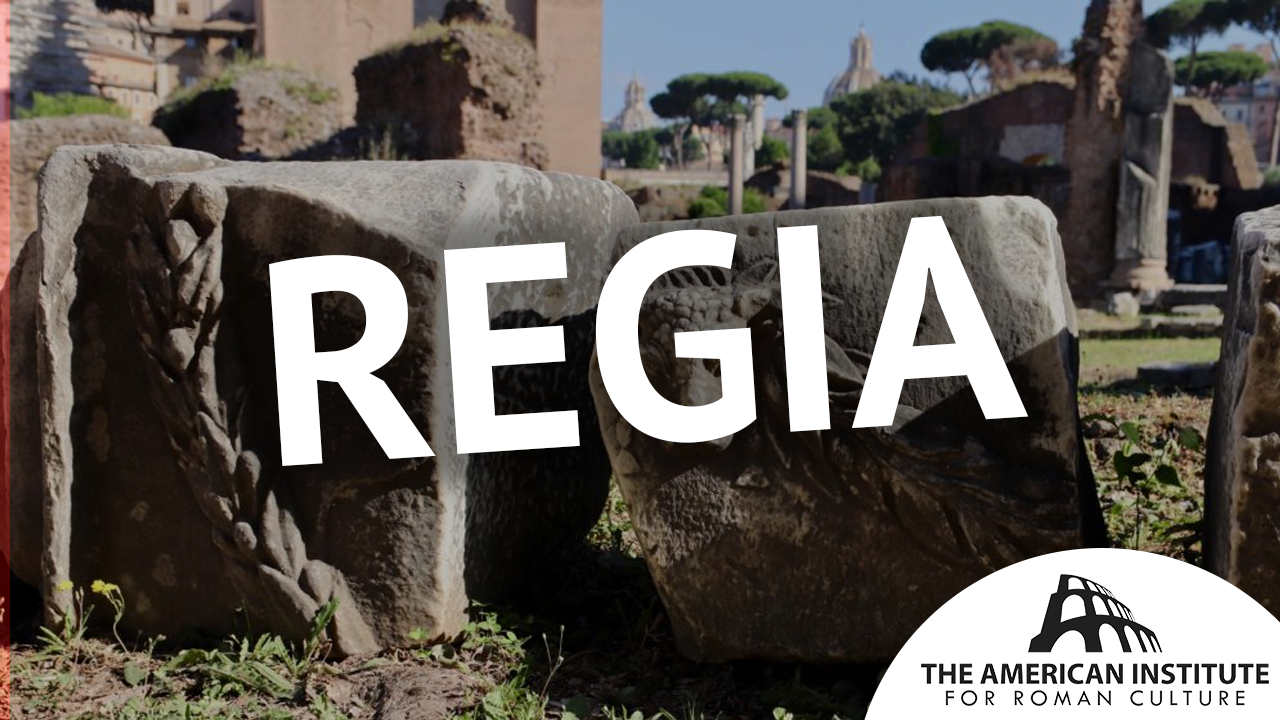 The Regia was an old (7C BC) structure that may have first been the king’s house in the regal period. By the time of the Augustus, it took on its definitive appearance, faced with Carrara marble. The structure had a number of shrines to Mars, Consiva, Ops. It was next to the Temple of Vesta and behind the Temple of Divus Julius. 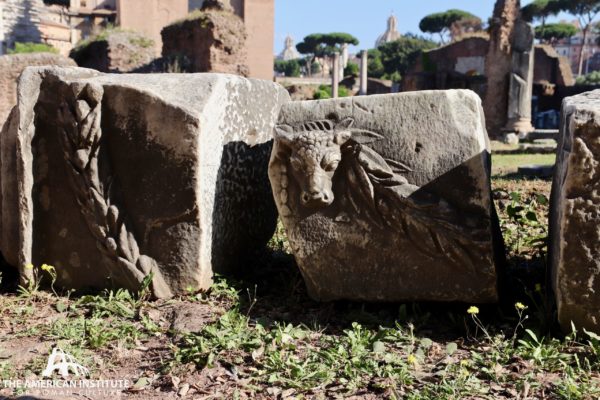 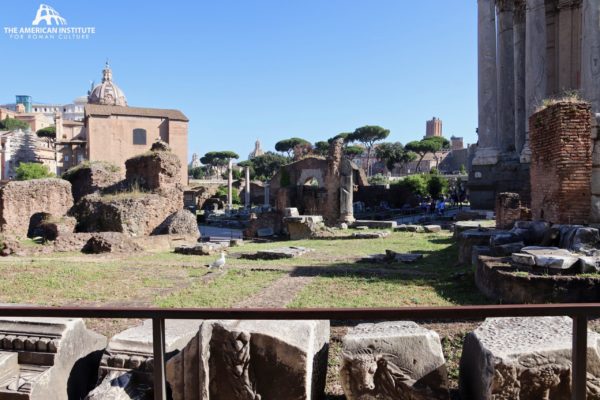 The existing ruins belong to three periods, the republican, the early imperial and the medieval. Of the superstructure of the first two periods almost nothing remains except the lowest courses of some of the walls and many architectural fragments. The republican remains are found only in the foundations of the imperial structure, the ground plan of which is practically identical.

The interior was divided into three rooms, in the largest of which was found a pavement of Anio tufa blocks (perhaps therefore post-Sullan), and in this a circular substructure of grey tufa, 2.53 metres in diameter, dating from the early period.2 There was a doorway in the original building, but it was roughly widened for the mediaeval house, and two rude steps placed in front of it.

The irregular space between this part of the regia and the Sacra via was occupied by an open court, with a covered ante-chamber at the east end, where the main entrance seems to have been. The greatest width, north and south, of the area of the regia was about 27 metres, and the least about 12 metres. The court was paved with slabs of marble, and in it are two wells and a cistern, which may date from a very early time, though Frank assigns the greater age to the main (trapezoidal) building, and contained fragments of various kinds. Near the cistern is a base of tufa blocks, with traces of a circular superstructure. To this may belong the round block of peperino with the inscription A. COVRI (second century B.C.).3 At the south-west end of the marble building is a small room, and near this in the wall was found the inscription (NS 1899, 128） of the SCHOLA KALATORUM (q.v.), but no identification of any of the existing divisions of the ruins with any of the parts of the ancient regia mentioned in classical literature is possible.

In the seventh or eighth century the regia was transformed into a private house, the traces of which are visible in all parts of the area, but especially along the Sacra via, where the house was approached by a flight of two steps roughly made of marble and travertine, on which stood a row of cipollino columns taken from some ancient building.

Where in Rome is the Regia?

Created by The American Institute of Roman Culture, published on 01/24/2020 under the following license: Creative Commons: Attribution-NonCommercial-ShareAlike. This license lets others remix, tweak, and build upon this content non-commercially, as long as they credit the author and license their new creations under the identical terms. Please note that content linked from this page may have different licensing terms.