SACRA VIA, the oldest and most famous street in Rome. It and the Nova via were the only streets in the city called viae before the imperial period, when we hear of a VIA FORNICATA, VIA TECTA and VIA NOVA (qq. v.).

Sacra via (ἡ ἱερὰ ὁδός) was the correct and well-nigh universal form of the name, and the reverse order, via Sacra, occurs, outside of poetry (e.g. Hor. Sat. i. 9. 1), with extreme infrequency (Plin. NH xix. 23; Not. Reg. IV; Suet. Vit. 17; Ascon. Cic. pro Mil. 141; CIL vi. 9239, 9418, 9549). Further evidence for this is found in the word sacravienses (Fest. 178), and in the protest raised by the grammarians against the common practice of pronouncing the name as if it were a compound (Fest. 290: nec … appellari debere ait Verrius sed disiuncte, ut caeteras vias Flaminiam AppiamLatinam, ut ne Novamviam quidem, sed Novam viam).

The Sacra via proper began at the top of the Velia, where it was called summa Sacra via, near the temple of the Lares (Mon. Anc. iv. 7), the house of the rex sacrorum (Fest. 290), the temple of Jupiter Stator (Plut. Cic. 16:ἱδρυμένον ἐνἀρχῇ τῆς ἱερᾶς ὁδοῦ πρὸς τὸ Παλάτιον ἀνιόντων) and the later arch of Titus (Haterii relief, Mon. d. Inst. v. 7: arcus in sacra via summa), and extended down to the east end of the forum, a point variously designated as near the regia, the temple of Vesta, or the arch of Fabius (Fest. 290; Mart. i. 70. 3-4; Cic. pro Plane. 17: si quando iactor in turba, non illum accuso qui est in summasacra via cum ego ad Fabium fornicem impellor; Varro, RR i. 2). Thrice in poetry (Hor. Carm. iv. 2. 35; Mart. i. 70. 5; iv. 78. 7) this section seems to have been called sacer clivus (see CLIVUS SACER), and to go from the upper end to the lower was called sacra via descendere (Cic. ad Att. iv. 3. 3; Asc. in Scaur. 27; Hor. Epod. 7. 7), or deducere (Sail. Hist. ii. frg. 45). This street, from the top of the Velia to the entrance to the forum, is the Sacravia of all the sources, literary and epigraphical, down to the end of the empire, with two exceptions, Varro (LL v. 47: Carinae postea Cerionia, quod hinc oritur caput sacrae viae abStreniae sacello quae pertinet in arce(m), qua sacra quotquot mensibusferuntur in arcem et per quam augures ex arce profecti solent inaugurare. Huiussacrae viae pars haec sola volgo nota quae est a foro eunti primore clivo), and Festus (290: Sacram viam quidam appellatam esse existimant quod in eafoedus ictum sit inter Romulum ac Tatium: quidam quod eo itinere utantursacerdotes idulium sacrorum conficiendorum causa. Itaque ne eatenus quidem,ut vulgus opinatur, sacra appellanda est a regia ad domum regis sacrificuli, sedetiam a regis domo ad sacellum Streniae, et rusus a regia usque in arcem). It is evident that Varro-and Festus following his authority- believed that the Sacra via owed its origin to the fact that it was the course of religious processions, and supposed that the street began at the shrine of STRENIA (q.v.), not mentioned elsewhere, but near the site of the Colosseum, ascended the slope of the Velia, and after descending to the regia, crossed the forum to the Capitol. This statement, however, is disproved by what he himself adds about common usage. There is therefore no reason for supposing that Sacra via ever meant more than the street from the Velia to the regia (cf. Plin. NH xix. 23 : moxCaesar dictator totum forum Romanum intexit viamque sacram ab domo sua etclivum usque in Capitolium; Plut. Cic. 22: καὶ πρῶτων ἐκ Παλατίουπαραλαβὼν τὸν Λέντλον ἦγε διὰ τῆς ἱερᾶς ὁδοῦ καὶ τῆς ἀγορᾶςμέσης), although the term is now frequently used to include the stretch from Colosseum to forum, and sometimes of that within the forum also. The explanations given by Varro and Festus (cf. also Serv. Aen. viii. 641) are unsatisfactory, and probably the street was called sacra because on it stood the most sacred shrines of Rome, those of Vesta and the Lares, as well as the dwellings of the Vestals, the pontifex maximus and the rex sacrificulus (cf. Ov. Trist. iii. I. 28; Binder, Die Plebs 62-64), although it may be that the street itself, from its position and early importance, was regarded as something intrinsically sacred (Mitt. 1895, 162).

The course and level (AJA 1923, 390 sqq.) of the Sacra via varied somewhat at different times. As it was the principal means of communication between the Palatine and the forum (Plut. Cic. 22; Tac. Hist. iii. 68; Cass. Dio lxiv. 20; lxxvii. 4), it probably began on the summit of the Velia, near the porta Mugonia and the temple of Jupiter Stator, and ran in a fairly straight line to the regia and temple of Vesta, but just at what point it approached them is not certain. After the building of the fornix Fabianus in 121 B.C. the street passed through it.

We have but scanty remains of the Sacra via of the period of Sulla. A street (which is perhaps the vicus Vestae) which diverged from it at the fornix has been found under the temple of Julius Caesar and the arch of Augustus, the pavement of which lies at 11.90 metres above sea-level (JRS 1922, 12-14); and a few blocks exist of its pavement below the steps at the north-east corner of the temple of Julius at 12.50 metres above sea-level. At the ‘temple of Romulus’ it lay at about 14 metres and at the divergence of the clivus Palatinus at about 27 metres (AJA 1923, 397-8). For the remains of structures attributable to this period (and to earlier times) along this portion of its course, mainly shops and wells, see TF 87, 88.

After the rebuilding of the regia in 36 B.C. and the building of the temple of Divus Iulius a few years later, it passed to the north of these structures, and then bent to the left to the temple of Castor (Mart. i. 70. 3-4: vicinum Castoracanae transibis Vestae virgineamque domum). Fortitus the early empire the line is definitely established by the discovery of the Augustan pavement (Ills. 10, 45, 46), 5 metres wide, for a considerable part of this distance, which shows that the street curved to the north just east of the very top of the Velia, which it left very near the present arch of Titus. It falls from a level of 28.30 metres above sea-level at a point 7 metres east of the arch of Titus to 12.60 metres at the north-east corner of the temple of Julius. Some of this pavement has been found under the steps of the temple of Venus and Roma (AJA 1923, 399 sqq.- and also for what follows).

Opposite the middle of the basilica of Constantine this Augustan pavement is crossed by the massive concrete foundations of a series of arcades of the time of Nero (AJA 1923, 403 sqq.). These foundations run in parallel lines, first south-east and then, turning at right angles, south-west. This shows that Nero changed the line of the Sacra via, in connection with the building of the DOMUS AUREA (q.v.), and made it run between this portico and the one opposite it up to the vestibule and then around the north-west corner of that building with a sharp turn. On the north side of the Augustan pavement are the foundations and walls of later private houses and buildings, which were destroyed by the erection of arcades on this side also. The level at the east end of the forum remained as before. At the temple of Romulus it was about 16.70 metres above sea-level, in front of the basilica of Constantine 22.50 to 23.10, and at its junction with the clivus Palatinus about 27.60 metres. When Hadrian built the temple of Venus and Roma, some further alterations in the street in front of it must have been made, and thereafter the Sacra via from the Velia downwards to the regia appears to have been an avenue, about 30 metres wide, flanked on both sides by porticoes and shops, those on the north being finally destroyed by the erection of the basilica of Constantine. It was this avenue that was represented by the pavement, 23 metres wide including the side walks, which was removed in 18992 (LR 190; BC 1900, 11; Atti 516; Mem. Am. Acad. v. 115-126; see Ill. 7).

After the erection of the arch of Titus, the street passed through it and continued eastward in a straight line to the Meta Sudans, between the temple of Venus and Roma and the temple of Jupiter Stator and the buildings on the slope of the Palatine. The Nova via joined the Sacra via near the arch of Titus, and at about the same point the so-called clivus Palatinus branched off the south and ascended the Palatine at the porta Mugonia. 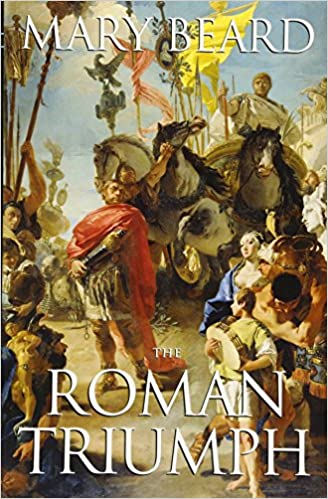