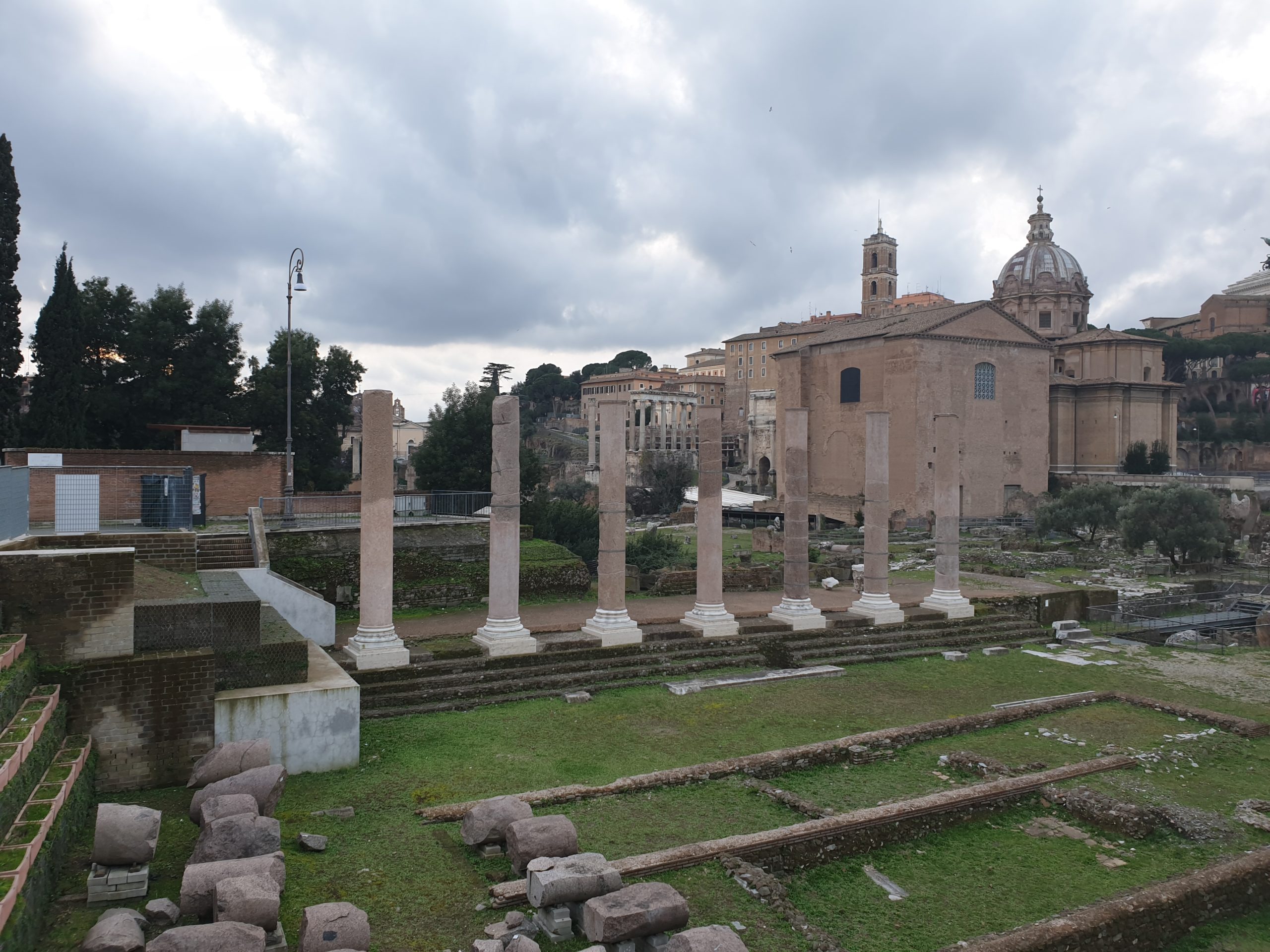 After celebrating his triumph in AD 71, Vespasian built his forum in AD 75 (Dio,History 65.15) with the spoils from his victory in Judea. His complex is a little atypical for the way in which the Temple of Peace was set back into the portico that surrounded the piazza.  It was famed for its massive amounts of gold and other precious materials taken from the Temple in Jerusalem (Josephus, The Jewish War, 7.158). The forum included among its treasures the Menorah, depicted on the Arch of Titus on the Velia Hill.

Entirely destroyed in the fire of Commodus AD 192, the forum you see today is a Severan-era rebuild.  Impressive remains were revealed in recent excavations and conservation work. Only a small portion is revealed, but the original space was 110 X 105 m, ten times the area occupied by the Augustan Ara Pacis in the Campus Martius. The central piazza was filled with small stalls or offices for business activity (later ripped up and filled in with soil for agricultural pursuits, as discovered in recent excavations.

Excavations also revealed an intact granite column toppled over (scale of the temple was 60 foot shafts), a large portion of marble and granite pavement, and industrial-level activity for centuries (6C- 10C)  of the lime-kiln burners who smashed and burned marble, reducing the stone into lime for building material. The impressive wall of a hall in the porticoed area toward the Forum Romanum contained the Forma Urbis marble map, composed of 150 slabs of marble for an area of more than 50 X 50 feet,  descorated with hundreds of labeled monuments and houses and streets and fountains, at a scale of 1; 240- surprisingly accurate and extremely helpful resource for the study of the topography of ancient Rome. Fragments were first found in 1562 at the base of the wall and some pieces incorporated into medieval walls.  A number of fragments were found recently, in 2006. Each puzzle piece constitutes a clue of what 3C Rome looked like. The map was probably a showpiece, a marble version of what was a legal document, periodically emended on paper or velum. Behind this Forma Urbis wall was the contiguous construction of the Church of SS. Cosma and Damiano (6C), also dependent on the forum construction.

To get a sense of the original extent of the forum, which was massive, you need to take into account the new excavations, previously described, the recently re-erected granite columns (anastylosis) behind the Basilica Aemilia, the firewall of the Forum Transitorium (where the Colonnacce stand), and the Tor dei Conti 13C medieval tower (originally 50 m high), at the start of the modern Via Cavour street. 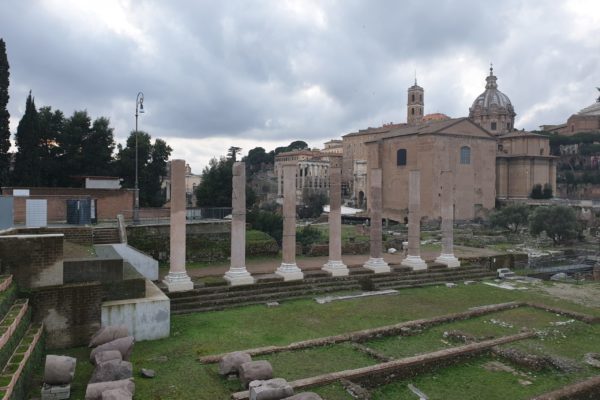 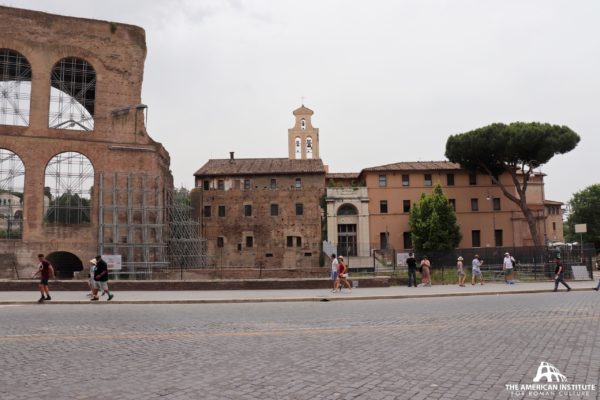 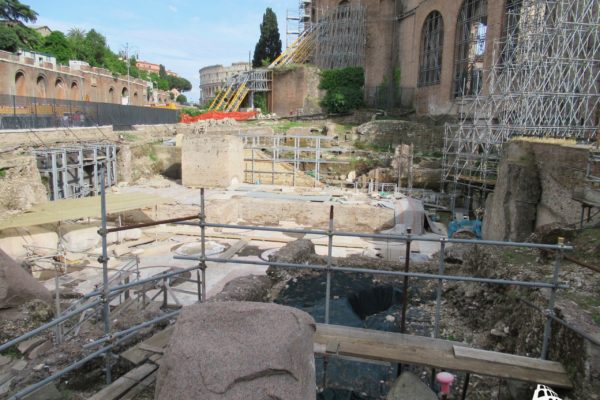 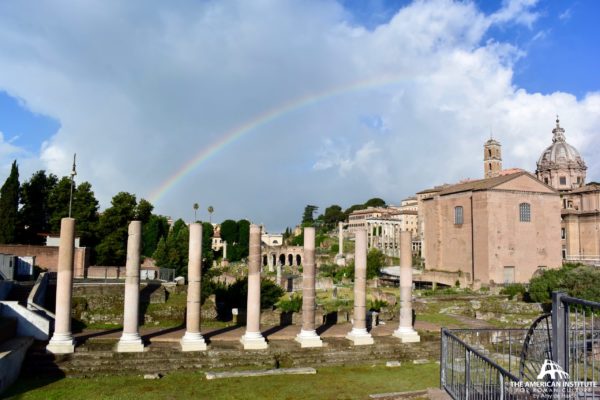 Just before the death of Commodus, probably in 191, the temple was destroyed by fire (Cass. Dio lxxii. 24. I; Galen, de comp. med. i. I), 1 but it must have been restored, probably by Severus, for it is mentioned in the succeeding centuries as one of the most magnificent buildings in the city (Herod. i. 14. 2; Amm. Marcell. xvi. 10. 14; Hist. Aug. trig. tyr. 31. 10). It gave its name to the fourth region of the city (Not. Reg. IV). In 408 there were seismic disturbances for seven successive days in the forum Pacis (Marcell. Comes, Chron. min. ed. Mommsen ii. 69: in foro Pacis per dies septem terra mugitum dedit), and the temple may have been injured then. At any rate Procopius (BG iv. 21), writing in the sixth century, says that it had long since been destroyed by lightning, although there were still many works of art set up in the immediate vicinity.

The history of the forum Pacis is that of the templum, and apart from the entrance just described, scarcely any traces of either have been found except a portion of the pavement of giallo antico and pavonazzetto of the southern angle of the form ten metres below the present level of the Via del Tempio della Pace (BC 1876, 52-53 ; see in general HJ 2-7; Rosch. iii. 1721; Gilb. iii. 135, 186-187 ; Thedenat 190-193).

Where are the monuments in the Forum of Vespasian?