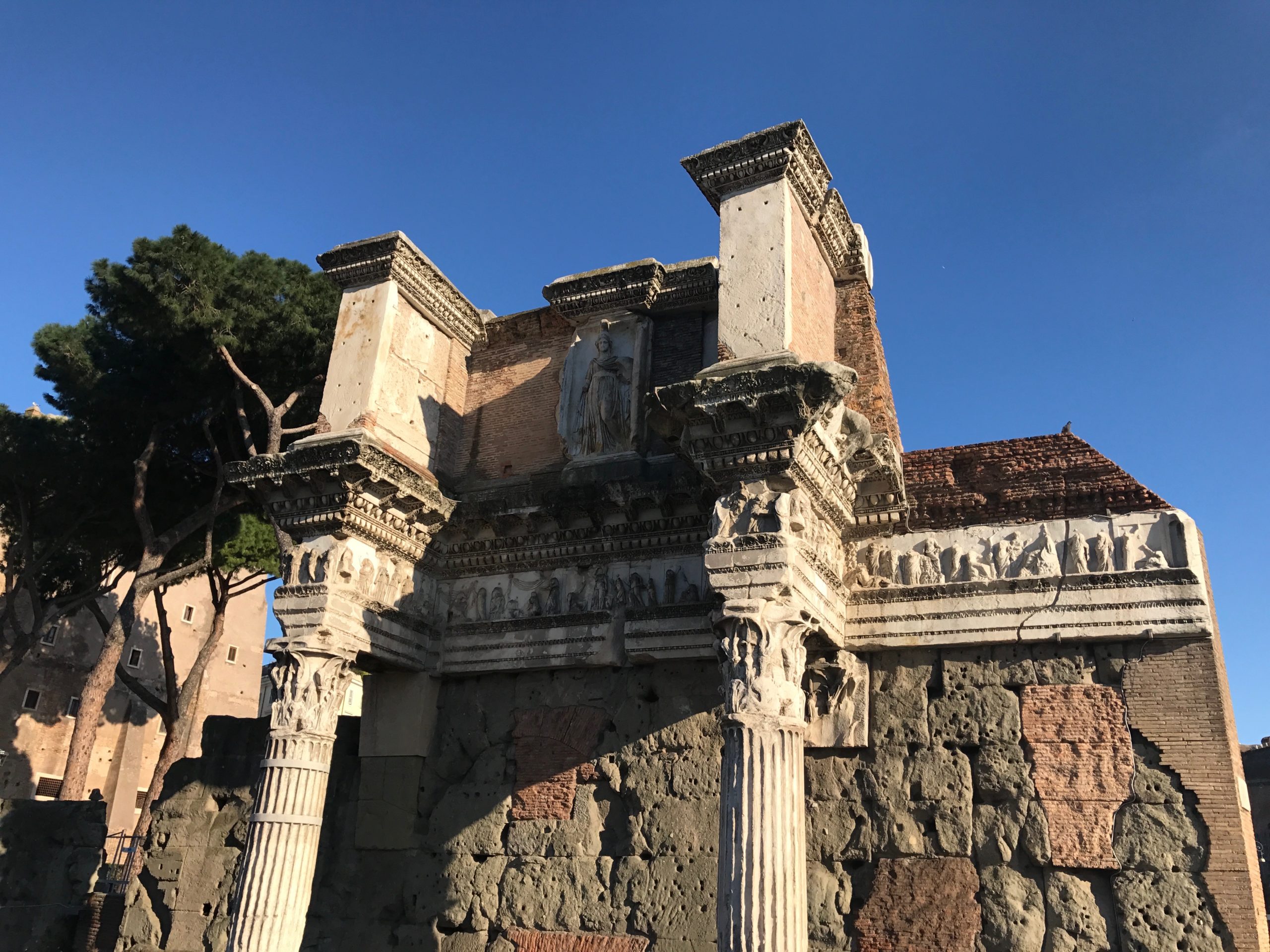 The Forum Transitorium (125 m X 45 m)  is the smallest and most narrow of all the imperial fora.  It essentially monumentalizes the old Argiletum street that ran from the Subura into the Roman Forum, entering between the Basilica Paulli and Curia. Other than the road (designated for booksellers, according to Martial), the area was largely undeveloped between the Forum of Augustus and Forum of Peace.

Therefore, to create an impressive space, Domitian’s forum began with an apsidal entrance (Porticus Absidata)  that masked the irregularities of the space behind, i.e., the road and the Temple of Minerva to the side (atop the Cloaca Maxima, also rebuilt at this time, with the construction of the forum.

Domitian had the temple dedicated to his patron goddess goddess Minerva and celebrated her temple here with the annual Quinquatrus (March 19-23) festival to celebrate the spring equinox (Ovid, Fasti III.809).  The entire length of the forum was lined with impressive rows of Phrygian purple columns surmounted by a massive entablature.  The frieze zone narrated images and scenes related to Minerva, or at least that it what we surmise from the small frieze zone narrating the myth of Minerva and Arachne.  These sole two columns became buried in debris and were known as the “Colonnacce” the ugly columns. Above, on the large entablature is a large relief of a Minerva-like figure (with helmet and shield) but recently interpreted as one of many provinces that were displayed along the entire length on both sides.  (Another panel fragment of another province was found in the recent excavations, now on display in the Imperial Fora museum in the Trajan’s Markets). Upon the death of Domitian in 96, the forum was still unfinished; Nerva dedicated it and gave his name to the forum in 97. Colossal bronze statues of emperors were later added by Alexander Severus (S.H.A. Alex. Sev. 28.6). .

As the city declined, people began to dismantle this forum as well, 5C-9C, and the excavations in the 1990s revealed a 9C-10C house in the middle of the Argiletum in the middle of the forum.  The temple appeared in many drawings and paintings almost entirely preserved, until dismantled under Paul V for his massive fountain on Gianicolo Hill, beginning in 1606.

The excavation of the columns began in the early 20C, followed by total exposure of the site around it in the Fascist era demolition of the neighborhood to make way fo the imperial fora road.

As you make you way down the far end of the Argiletum, you may note the ruts in the late pavement. You’ll also see clearly the Column of Phocas, already in place in the tetrarch period, that greats you upon your entrance to the Forum Romanum. 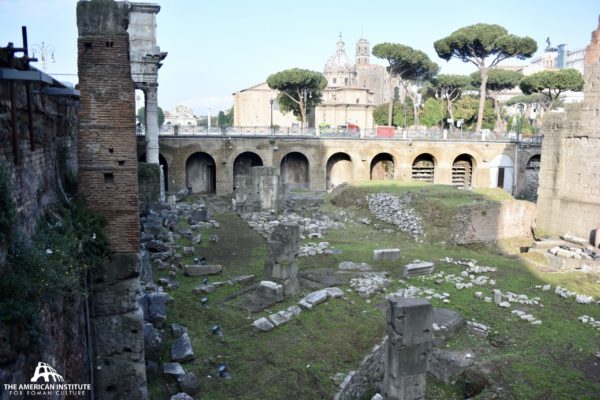 FORUM NERVAE, the fourth of the imperial fora (Mart. x. 28. 6, 5. 12), built by Domitian, but dedicated by Nerva at the beginning of 97 A.D. (Suet. Dom. 5; Stat. Silv. iv. 3. 9-10; Cassiod. Chron. 140; Hier. a. Abr. 2105; Eutrop. vii. 23; Vict. Caes. 12. 2; CIL vi. 953=31213). It occupied the space between the forum Augustum on the north-west and the forum Pacis on the south-east, and was in effeet a transformation of the intervening Argiletum with its crowded and unsightly buildings into a magnificent avenue which had the form of a very narrow forum. Its length was about 120 metres, its width about 40, and the walls of the fora already existing were extended so as to form a continuous enclosure. A part of the wall at the north-east end is still standing and corresponds in height and character with that of the forum Augustum which it adjoins, except that the size of the rectangular blocks of stone used in the construction has been considerably increased (from 59 cm. (2 Roman feet) to 78 cm.).

After the pattern set in the other imperial fora, Domitian built in his forum a temple of Minerva, to whose cult he was especially devoted (Suet. Dom. 15; Cass. Dio lxvii. I). It was dedicated by Nerva at the same time as the forum, and was a magnificent and imposing building (Vict. Caes. loc. cit.; CIL vi. 953=31213). It is represented on the Marble Plan (116), and stood in the centre of the north-east end of the forum. From either side short walls extended across the fora of Augustus and Vespasian. It was of the Corinthian order, hexastyle prostyle, and its apse projected beyond the limits of the forum.

Besides this temple Domitian also erected one to IANUS QUADRIFRONS (q.v.) ; and Alexander Severus set up colossal statues of all the emperors who had been deified, with bronze columns on which their res gestae were inscribed (Hist. Aug. Alex. Sev. 28. 6).2

The short ends of the forum were slightly curved, and that toward the forum Romanum was pierced by two monumental archways, while at the other end there was one, east of the temple. Of these arches the last-named was known as arcus Aurae (v. AURA), or arcus Aureus, in the Middle Ages (cf. the churches of S. Andreas and S. Maria de Arcu Aureo, of which the former is also called S. Andrea in Portogallo (Arm. 142, 170; Mel. 1905, 149; HCh 177, 312), while the arch at the other end, called arcus Nerviae, is still to be seen in the bird’s-eye view of Rome published in 1577 by Du Perac, and the Colonnacce were called Arca Noe (Noah’s ark); cf. S. Maria de Archa Noe (HCh 311), probably the same as S. Maria degli Angeli in Macello martyrum (cf. 342; Jord. ii. 474, 503). See also PORTICUS ABSIDATA.

Within the enclosure wall was a colonnade of marble columns, entirely surrounding the forum. Two of these columns, with about II metres of the wall itself, are still standing at the east corner of the forum, in the Via della Croce Bianca. This ruin, one of the most beautiful in Rome, is called Le Colonnacce. The wall is peperino, lined with marble, the columns are 8.80 metres high without the capital, and I.08 in diameter at the base (NS 1912, 226), and the intercolumniations 5.30 metres in width. Above the columns are a cornice and lofty attic which, instead of following the line of the columns, run along the wall itself in the intercolumnar spaces, and project and return round the columns, thus breaking the entablature into sections. The attic, which is 4.40 metres high, has a plinth and cornice, and in the space between the columns is a relief of Minerva, 2.65 metres high. The close parallelism between the architectural details of the forum Transitorium and those of Domitian’s palace has already been noticed (DuP o10, n. I), and is further developed by Fiechter ap. Toeb. i. 54-61. It is probable that similar reliefs, either of Minerva or of some other goddess, stood in each intercolumnar space. The frieze is decorated with reliefs representing (a) Minerva among the nine Muses; (b) the punishment of Arachne, together with scenes of household life, such as spinning, weaving and dyeing-the arts which were especially under the protection of Minerva. According to Strong (ScR 132) the scenes ‘are perhaps to be interpreted as scenes of initiation into the mysteries of the goddess of wisdom ‘ (Ann. d. Inst. 1877, 5-36; Mon. d. Inst. x. pls. 40, 41, 41a; Mitt. 1889, 88, 249; for the forum and temple in general, see Jord. i. 2. 449-453; Gilb. iii. 232-234; Mem. L. 3. xi. 22-26; 5. xvii. 521; Mel. 1889, 346-355; Mitt. 1891, 101-103; Thed. 194-197, 369-371; ASA 54).

Where in Rome is the Forum of Nerva?