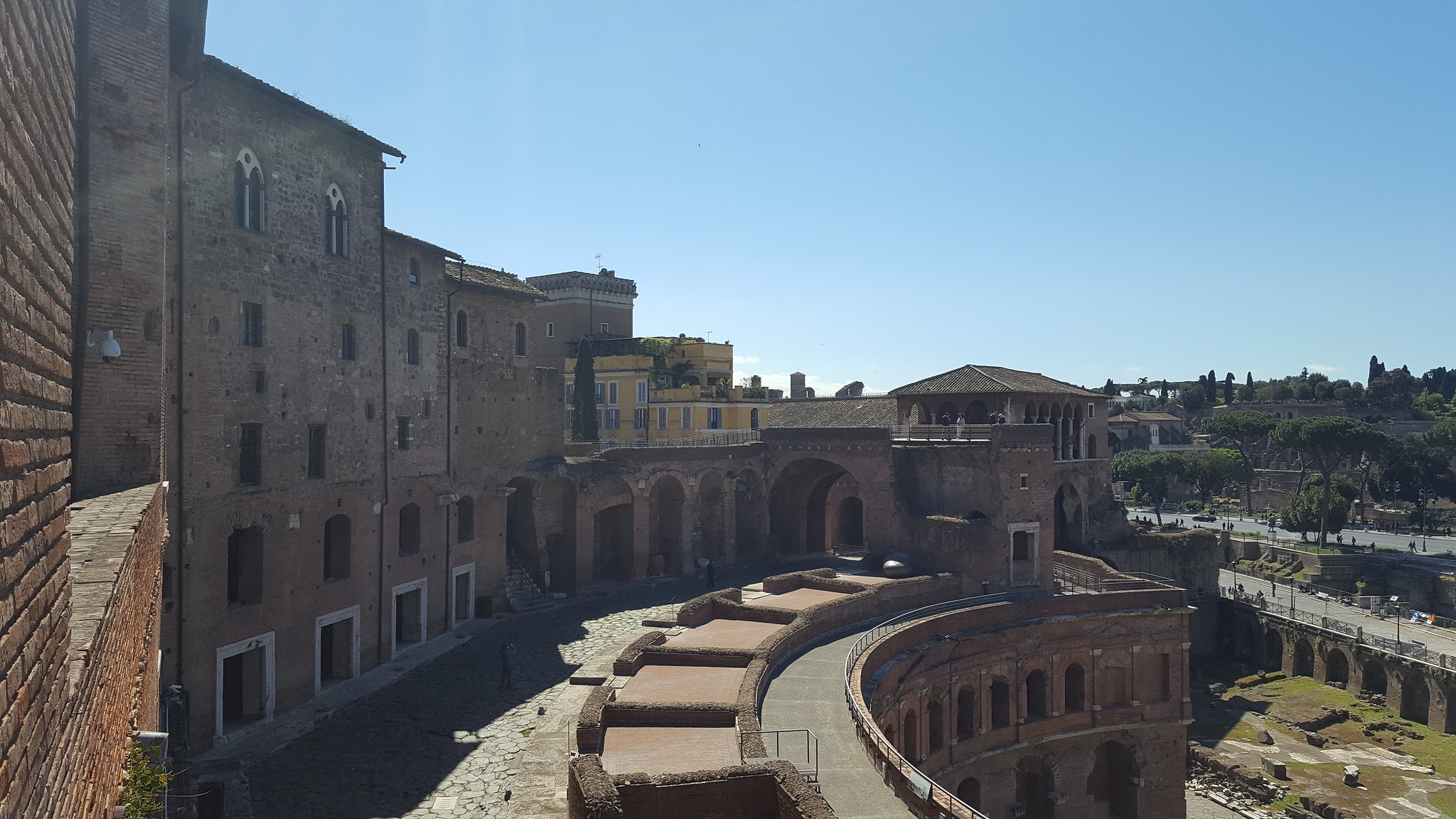 The Museum of the Imperial Fora (Trajan’s Markets)

Trajan's Markets. Imagine a site in Rome that has 1900 Year old constructions on three levels, some buildings 5 stories tall- in its totality an engineering masterpiece, holding up the projection of the Quirinal hill. It houses the best sculptural remains from the forums of Caesar, Augustus, Vespasian, Nerva, and Trajan. Its location is historical, and it gives you some of the most amazing views of the city, including the Capitoline, Vittoriano, Campus Martius, and Trajan's Column. It also has frequent exhibitions of archaeological subjects and contemporary art. You need it see it to believe it! See my livestreaming there today! #discoverMiC #MiCRoma @museiincomuneroma

Trajan's Markets. Another adventure in this extraordinary site: topographical, engineering wonder, Museum of the imperial fora collection. I start the walk at the lowest hemicycle, enter a hall with sculpture from the Forum of Trajan (griffin frieze and Dacians), then to the middle level, shops inside the hemicycle, up to the Via Biberatica, over to the view on top of the hemicycle,then up to the main hall area, over to the medieval cistern that holds an impressive collection of amphorae, and conclude in the great hall. #discoverMic #MiCRoma @museiincomuneroma @saverome @roma see my FB Live and Periscope!

The city of Rome has some incredible collections from the sites of Rome (e.g., Capitoline Museums, National Museum of Rome), but no museum is more inherently, than the city’s archaeological Museum of the Imperial Fora. The entire museum is entirely housed in the Trajanic-era constructions (107-110 CE) known as Trajan’s Markets (a modern designation applied in the 1920s and 1930s excavation period), a complex of roads and buildings with shops over three distinct levels.  No one knows what the Markets were used for. A shopping mall? An administrative center? They are located on the slope of the Quirinal hill, contemporary in its construction with, though distinct from, the adjacent Forum of Trajan. Form follows function, and the Markets definitely had a purpose and use distinct from the Forum of Trajan, entirely covered with marble veneer and using marble columns.

The Markets complex is a masterpiece of architecture and engineering, cut into the hillside, also constructed to sustain the mass of the Quirinal slope.  The experience of exploring the well preserved complex, akin to visiting the basalt stone streets and brick-faced buildings of Ostia Antica, allows you to step back into second century CE Rome, with well preserved roads on three levels, framed by halls, numerous rooms, and a complex of insulae (apartment building), one preserved up to four stories.  For the engineering and design of the complex, with over 150 rooms, refer to the recent masterful studies of the construction process (see L.. Lancaster in bibliography).

From 1985 to today, the excavations in the 20s and 30s of the imperial fora spaces revealed over 40,000 sculptural and architectural fragments, now inventoried and stored, with the best representative pieces on display.  In recent times, excavations that continue have revealed new insights on the forum spaces and also surprise discoveries,  many of which are on display in the first rooms of the complex, including the colossal head of Constantine found in a drain in the Forum of Trajan in 2005. The museum also accommodates several exhibits annually, from imperial-themed shows to displays of contemporary art, oftentimes metal and stone sculptures.

The museum complex consists of several areas that also highlight the various phases of the markets over time.

The modern entrance leads you right into the main hall (glassed in after a recent conservation project), with a complex set of piers and arches that sustains the original vaulting that seems to float over the two story space.  The series of rooms on either side of the hall contain individual introductions to the separate imperial forum constructions, those of Julius Caesar, Augustus, Vespasian, Nerva, and Trajan.

You can explore each imperial forum on Ancient Rome Live:

In the back of this structure a hall leads to a medieval-period space constructed that now holds an impressive collection of imperial-era amphorae.  The rooms directly above the large hall contain two wings devoted to the Forum of Caesar and Forum of Augustus.  For the Forum Iulium, architectural pieces date from the Caesarian and Trajanic-era constructions.  On the opposite wing, the collection contains some important models of the forum (by Architect Gismondi), as well as some large decorative architecture pieces.  It is possible to step outside on multiple levels to admire the view of the Forum of Trajan and the distant Vittoriano monument.

One may proceed through a series of rooms that house the remains of the Forum of Augustus, namely the marble fragment of the colossus statue and the painted marble panels that decorated the hall of the colossus.  Next there are reconstructions of statuary from the Forum with elogia in Latin that praised the famous and great men of Rome’s history.  There are also refined portico decorations with caryatid figures (copied from the Erectheion in Athens) and marble shield portraits of various guises of Jupiter.

The route continues to an ancient Trajanic-era road (the first of three) outside to allow you a view of the Torre delle Milizie. You may proceed to the impressive viewing terrace overlooking the entire complex.  Below, you can access a staircase and descend to the Via Biberatica, the main road lined with taverna on both sides.  The impressive insulae were in part reconstructed during the medieval period, as visible through the use of tuff blocks versus the original brick-faced walls. You can wander through the site from both ends of the sloping road to make your way to the grand hemicycle, lined with shops and a broad covered corridor, framed by a series of deep, regular curved windows.  You can proceed down to the final level, with a third basalt stone road.  The road is hemmed in by the shops of the hemicycle on one side and the remains of the protective firewall (mostly dismantled) that distinguished the Markets area from the Forum of Trajan, entirely covered in marble.  The marble pavement and re-erected columns belong to one of the porticoes that framed the massive piazza.  The two large rooms on either end of the hemicycle house some of the great architectural blocks, friezes, statues of Romans and statuary of the Dacian prisoners that decorated the Forum of Trajan – gates and Basilica Ulpia.

Where in Rome are Trajan’s Markets?

Created by The American Institute of Roman Culture, published on 03/20/2020 under the following license: Creative Commons: Attribution-NonCommercial-ShareAlike. This license lets others remix, tweak, and build upon this content non-commercially, as long as they credit the author and license their new creations under the identical terms. Please note that content linked from this page may have different licensing terms.