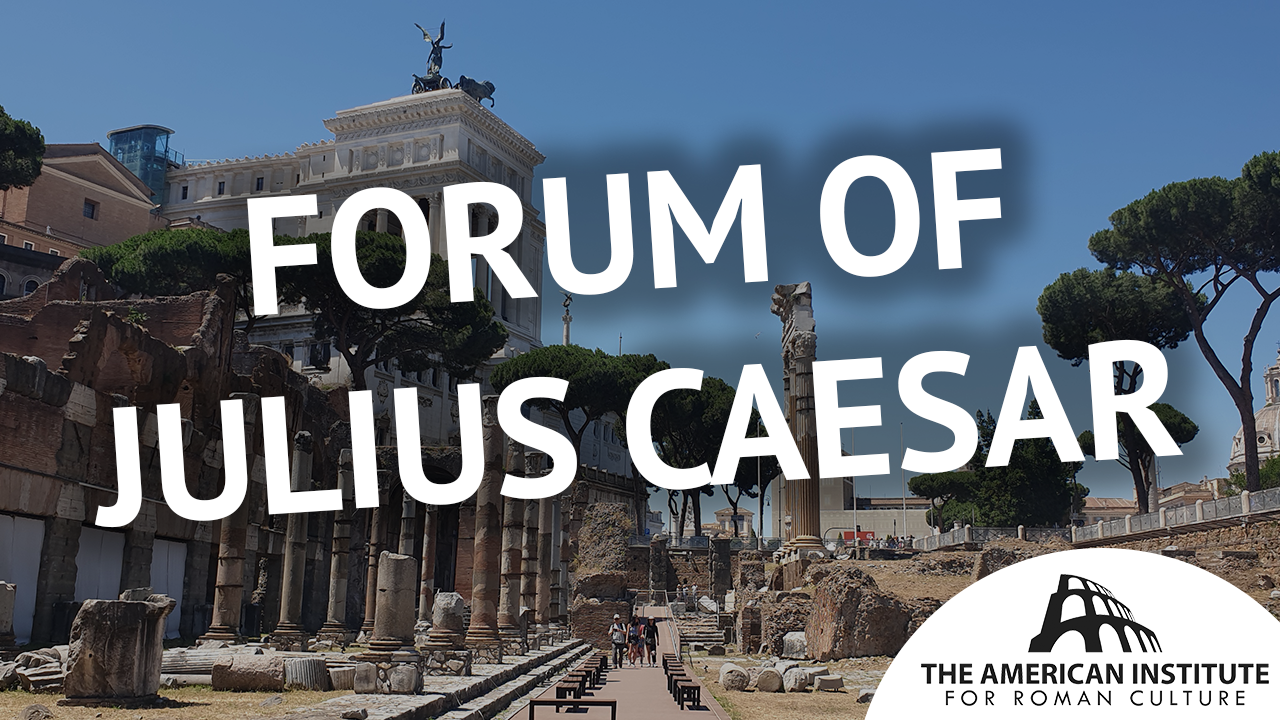 Caesar used his great wealth accumulated from the conquest of Gaul to purchase a large portion of land contiguous with the Forum, along the Capitoline Hill slopes (Cicero, Letters to Atticus, 4.16.8). The back end of the forum butted up against the tuff ridge that connected the Quirinal Hill to the Capitoline Hill, removed in the construction of the Forum of Trajan (probably under Domitian).

The forum space consisted of a long narrow piazza, with the Temple of Venus Genetrix on one end (Appian, Civil Wars, 2.102).  In the imperial period, a hall was added on the other end (behind the Curia). Caesar had vowed the temple in 48 BC and inaugurated the site on his triumph in 46 BC, before it was completed (Dio History 43.22.1-2); Augustus saw to its completion.  It was almost entirely rebuilt by Trajan.  There is some portico rebuilding after the fire of Carinus in 283.

The Fascist era anastylosis (architectural restorative technique employing original pieces of ancient building material)  of the marble columns of the temple are impressive, with missing portions filled in with small bricks imitating the marble flutes. The columns sustain a portion of the preserved marble  frieze and cornice of the Trajanic-era temple. On the temple podium there is also a cast of the Trajanic-era cupid figures that adorned the interior frieze.

Major excavations of the site took place in the 1930s for the construction of the Via dei fori Imperiali.  Much of the material found is on currently on display in the Imperial Fora museum in the Markets of Trajan.  Excavations continue today, led by the Danish Institute.

The Museum of the Imperial Forums in Trajan’s Market, Ed. L. Ungaro (Electa 2007).

Greg Wightman, “The Imperial Fora of Rome: Some Design Considerations,”

Roger B. Ulrich, “Julius Caesar and the Creation of the Forum Iulium, 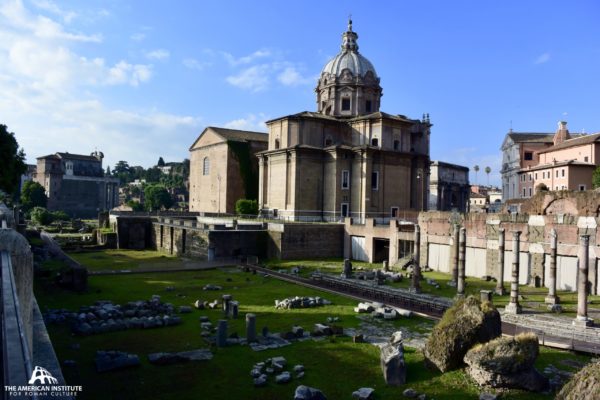 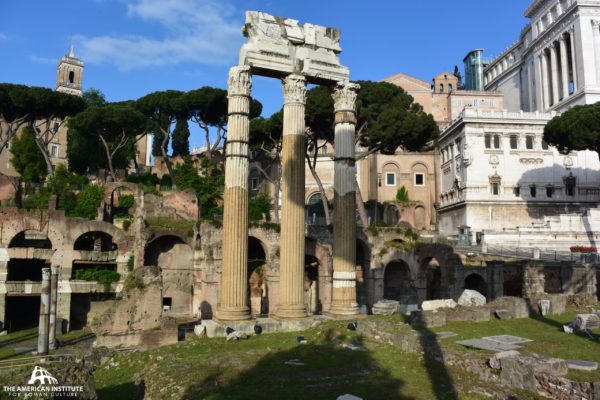 Forum Iulium:  the first of the so‑called imperial fora, begun by Julius Caesar and designed, not for a market, but to provide a centre for business of other kinds (App. B. C. II. 102). The plan of this forum had been conceived as early as 54 B.C., for in that year Cicero and Oppius with engaged in purchasing land for Caesar from private owners, and had already paid sixty million sesterces (Cic. ad Att. IV.16.9). More land was acquired afterwards, and the final cost is said to have been one hundred  p226 million sesterces, about £1,000,000 Suet. Caes. 26), a sum perhaps exaggerated.

The temple of Venus (aedes, Livy, Pliny, Suet., Vitr., templum, Ovid, Pliny, Tacitus, νεώς Appian, Cass. Dio, Ἀφροδίσιον Cass. Dio) was pycnostyle  and built of solid marble Latin Library: (Ov. A. A. I.81).  The statue of Venus Genetrix by Arcesilas, which Caesar set up, in foro Caesaris, was probably in the cella of the temple.1 (For another type of Venus Genetrix (seated) on a coin, see BM Rep. I.583.4277.) Caesar also placed in the temple two paintings by Timomachus, Ajax and Medea; a gilded statue of Cleopatra App. B. C. II.102); six dactyliothecae or collections of engraved gems; and a thorax adorned with British pearl Later, Augustus is stated to have set up in the temple a statue of the deified Julius with a star above his head (Cass. Dio), although some scholars believe that this is a mistake for the temple of divus Iulius in the forum (see Jord. Hermes 1875, 342‑343; Gilb. III.226).

A colossal statue was erected near the temple in honour of Tiberius by fourteen cities of Asia Minor which had been relieved by him  p227 after the earthquakes of 17 and 23 A.D., with personifications of them on its base: and a copy of this in relief was found at Puteoli Atti Acc. Nap. 1903, 119 sqq.: Ruesch, Guida Mus. Nap. 22‑24; CIL X.1624).

A statue of Drusilla was erected in the temple after her death (Cass. Dio, LIX.11.2‑3).

The forum Iulium was rectangular, about 115 metres long and 30 wide, surrounded by a colonnade and wall. Its main axis ran north-west to south-east, corresponding with that of the curia Iulia which adjoined it at the south corner. On this axis the temple was built, facing south-east. All that remains of the forum is part of the enclosure wall of peperino on the south-west side (Via delle Marmorelle 29), 12 metres high and 3.70 thick, and some small vaulted chambers or tabernae opening into the corridor of the forum through a row of peperino arches with Anio tufa piers and travertine imposts (TF 46). Of the temple of Venus, excavations in the sixteenth century brought to light portions of the foundations of peperino and travertine, and fragments of columns and frieze (cf. Strena Helbigiana 139‑142 and DAP 2.xv.366). At this time Palladio (Quattro Libri dell’ Architettura 1570, IV. ch. 31, 128 sqq.) and Labacco (Libro appartenente all’ Architettura, 1552, 25‑28; 1559, 33‑36) drew a plan and reconstruction from what was then visible, representing a peripteral octostyle structure with very narrow intercolumniations. A piece of the architrave still exists in the Villa Medici. (For forum and temple, see also Jord. I.2.436‑441; Théd. 178‑180, 371‑372; Gilb. III.224‑227; LR 302‑304; ZA 34‑36; Mem. L. 5.xvii.153; ASA 54.)

Where in Rome is the Forum of Julius Caesar? 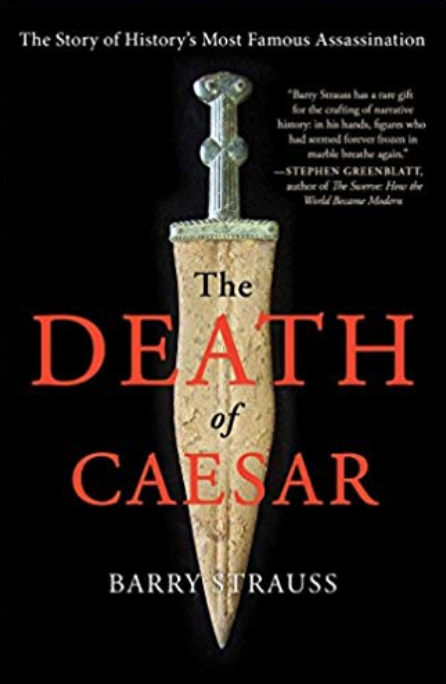 The Death of Caesar: The Story of History’s Most Famous Assassination

Caesar: Life of a Colossus

Created by The American Institute of Roman Culture, published on 03/13/2020 under the following license: Creative Commons: Attribution-NonCommercial-ShareAlike. This license lets others remix, tweak, and build upon this content non-commercially, as long as they credit the author and license their new creations under the identical terms. Please note that content linked from this page may have different licensing terms.