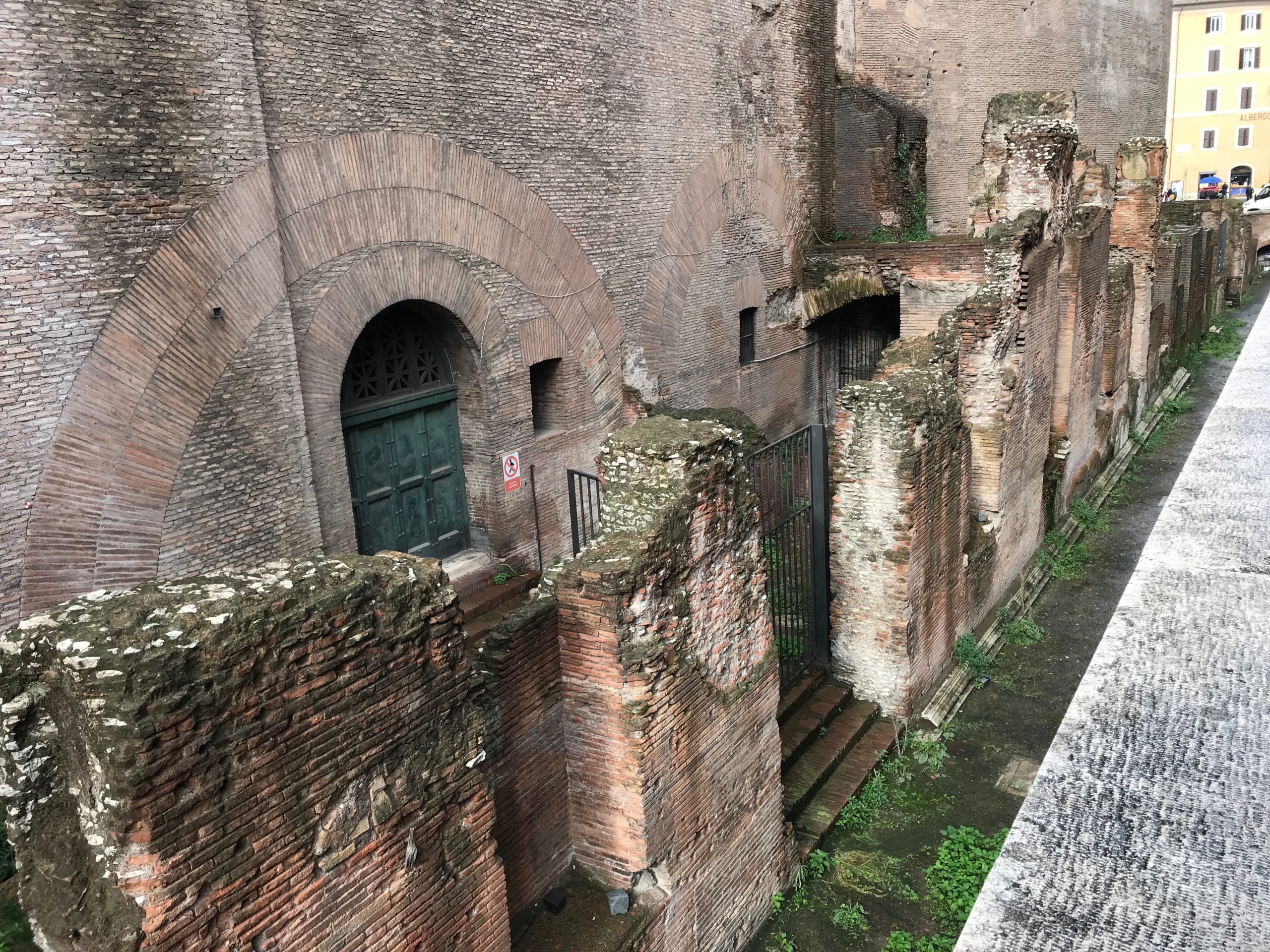 The saepta, enclosure, was a massive space (310 X 120 meters, according to the fragments preserved from the marble Forma Urbis plan), destined for voting (comitia centuriata and tributa) in the Campus Martius, part of the villa publica, a large complex constructed in 435 BC (Varro, Agriculture 3.2.4).

The structure was lavishly rebuilt by Julius Caesar, starting in 54 BC (Cicero, letters to Atticus, 4.16.8).  Agrippa completed the project in 26 BC (Dio, History, 53.23.1-2), adorning it with art. Each portico took on a distinct character from its artwork: Portico of Meleager and Portico of the Argonauts.

Destroyed in the fire of AD 80, it was rebuilt, then destroyed in the fire of 110. The Hadrianic rebuilding is partially visible in a section next to the southeast corner of the Pantheon. It is brick faced and was once lined with marble panels, according to the visible attachment system.  The Meleager and Argonaut designations remained throughout indicating that the original artwork (sculpture and/ or painting) was refurbished or reconstructed for centuries (Pliny, HN 36.29, Cass. Dio 53.23.2, Martial 2.14.5-6).

Throughout the Republic the Saepta was tied to the Diribitorium to the south, where the vote were counted.  The Agrippa-era rebuilding of this structure was the largest roofed hall in antiquity (Dio, History, 55.8.4).

SAEPTA IULIA (later Septa (e.g. CIL xv. 7195) and τὰ Σέπτα): the building which Caesar planned to erect (Cic. ad Att. iv. 16. 14) in place of the earlier saepta (see OVILE), the voting precinct in the campus Martius. It was to be of marble, surrounded by a lofty porticus one mile in length. Whether actually begun by Caesar or not, it was partly built by Lepidus (στοαῖς πέριξὑπὸ τοῦ Λεπίδου πρὸς τὰς φυλετικὰς ἀρχαιρεσίας （comitiis tributis) συνῳκοδομημένα, Cass. Dio liii. 23), and completed and dedicated by Agrippa in 26 B.C. Agrippa decorated the building with stone tablets and paintings, and gave the official designation of saepta Iulia. It seems to have been ordinarily called saepta only; once porticus saeptorum (Plin. NH xvi. 201); and once, in the third century, saepta Agrippiana (Hist. Aug. Alex. 26). It also continued to be known as ovile (Liv. xxvi. 22; Lucan ii. 197; Auson. Grat. act. iii. 13; Serv. Ecl. i. 33).

It is certain that Augustus built the new saepta primarily to take the place of the old as a voting precinct (cf. Cass. Dio liii. 23, quoted above), but that the diminishing importance of the comitia made its use for other purposes easy and natural, a process that was completed after Tiberius transferred the elections from the people to the senate. Such changes in use were probably reflected in some changes at least in the inner arrangement of the Augustan building.

The saepta in its final form is represented partly on fragments of the Marble Plan (FUR 35-36), and some of its ruins have been discovered at seven different points, under the Palazzi Simonetti, Doria, Bonaparte, Venezia, and the churches of San Marco and S. Maria in Via Lata (for the literature of six of these discoveries, see HJ 560, n. 7; BC 1893, 125-128; Cavazzi, Diaconia di S. Maria in Via Lata (1908), 197 sqq.; SR ii. 64, 151 ; and for the last, under the Palazzetto Venezia, NS 1911, 36). The building was a rectangular porticus, extending along the west side of the Via Lata (Corso), from the aqua Virgo (Frontinus, de aquis i. 22), the present Via del Caravita, to the Via di S. Marco, a distance of more than 400 metres (1400-1500 Roman feet). It was built of travertine, with eight longitudinal rows of piers, and 60 metres (that is, 200 Roman feet) deep. The first row, along the Via Lata, was ornamented with a balustrade. Four of the inner piers under the Palazzo Doria, belonging to the fourth and fifth rows, were measured by Hilsen. They are 1.70 metres square, 4 metres apart in the north-south direction and 6.20 in the other. Other piers further west show different dimensions (NS 1877, 208). Cf. also RA 93-96. Remains were also found when the Palazzo Simonetti (north of S. Maria in Via Lata) was converted into the Banco di Roma, consisting of Hadrianie brick pilasters (obviously therefore his restoration) about which no information has been published.

Lanciani has maintained that the saepta did not extend quite so far south, and that its southern limit was marked by an ancient street which is said to have been found in 1875 running from the Corso to the main door of the Palazzo Venezia (LR 474; LF 21; HJ 560, n. 7), perhaps the same as that reported to have been found in 1455 (LS i. 58). The evidence for the antiquity of this street is not conclusive, and is offset by the discovery of the masonry under the Palazzetto Venezia.1

Whether this porticus, which constituted the saepta in the third century after the restorations or rebuildings of Domitian and Hadrian, represents in any considerable degree the saepta of Agrippa, is an open question. Some evidence for the affirmative is found in the existing masonry, which is characteristic of the Augustan rather than of the later periods, and the length of the building affords just room for eighty or eighty-two lateral sections of the dimensions illustrated by the piers described above, a fact that suggests a comparison with the number of centuries voting in the comitia centuriata. If this does represent in the main the saepta of Augustus, we must suppose that gladiatorial combats, and still more certainly naval battles, took place in an open area on the west side of the porticus and were witnessed from its roof or upper story, as well as from platforms erected in the arcades. Gradually, however, this open area was covered with new buildings, like the Iseum and porticus Divorum (HJ 558-562 ; BC 1893, 119-42 ; Richter 230-232; RE i. A. 1724-1727).

According to a view which has been set forth with some plausibility (BC 1893, 136-142), the DIRIBITORIUM (q.v.), or hall where the votes were counted, was not a separate structure, but the upper story of the saepta. This theory accounts for the massive character of the masonry that has been found, and for other difficulties (HJ cit.).

Where in Rome is the Saepta Julia? 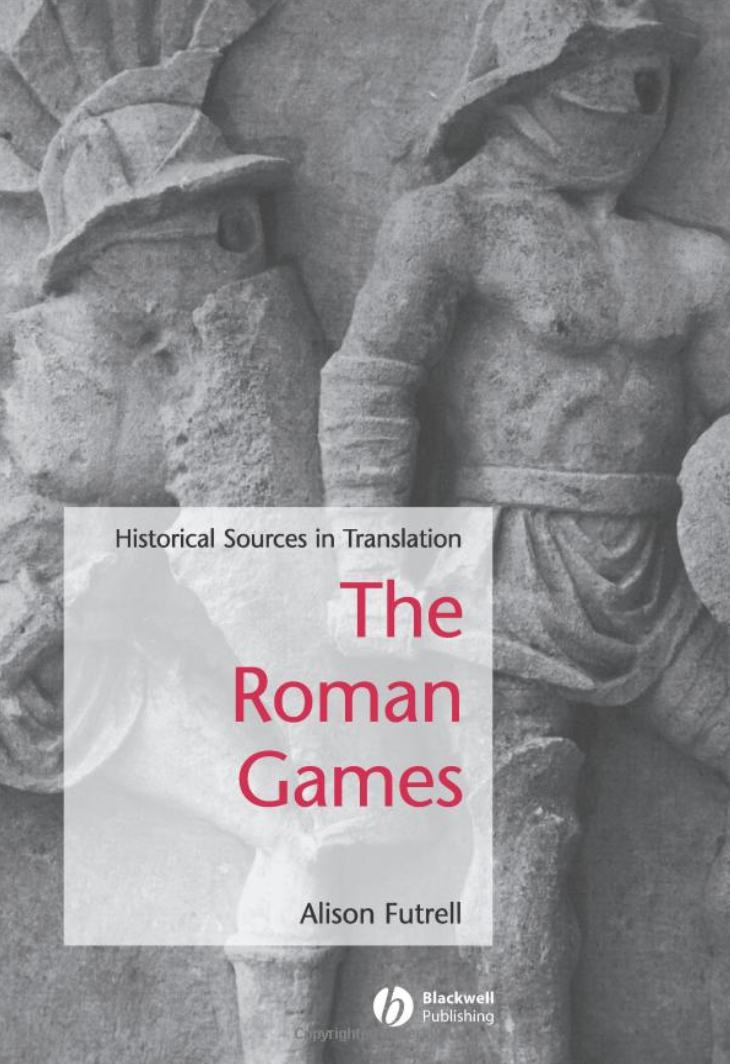 The Roman Games: A Sourcebook (Blackwell Sourcebooks in Ancient History) 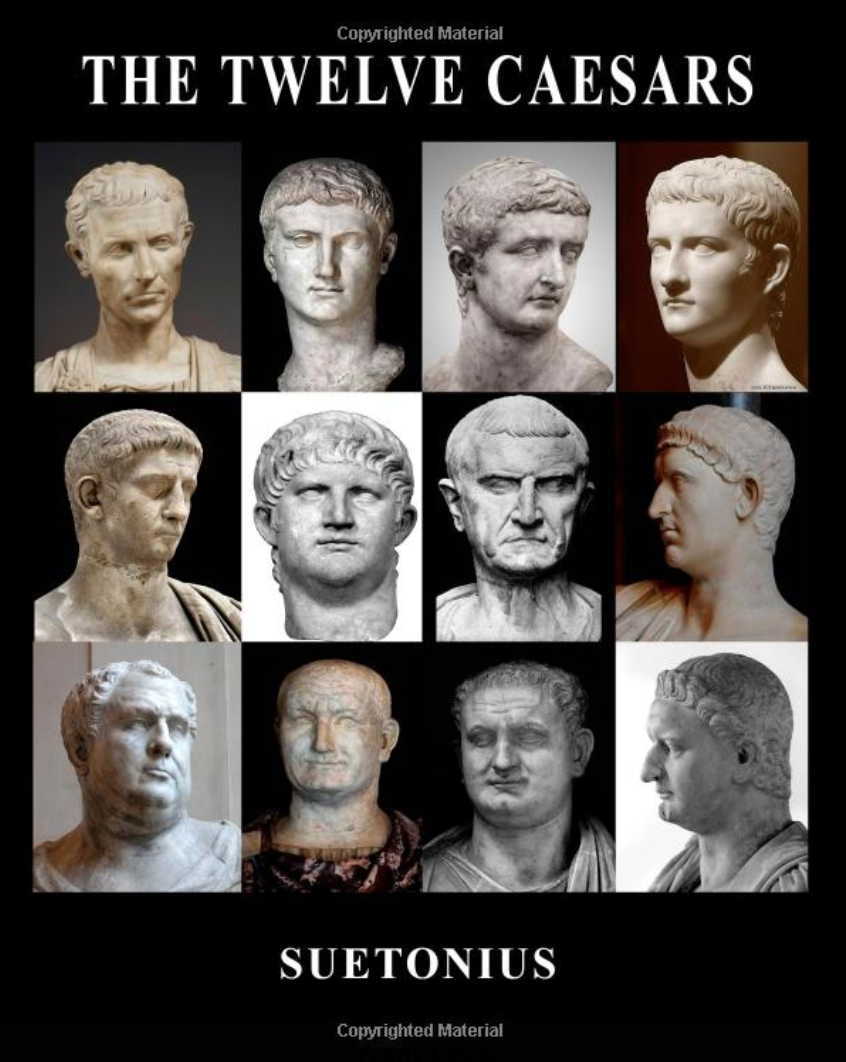 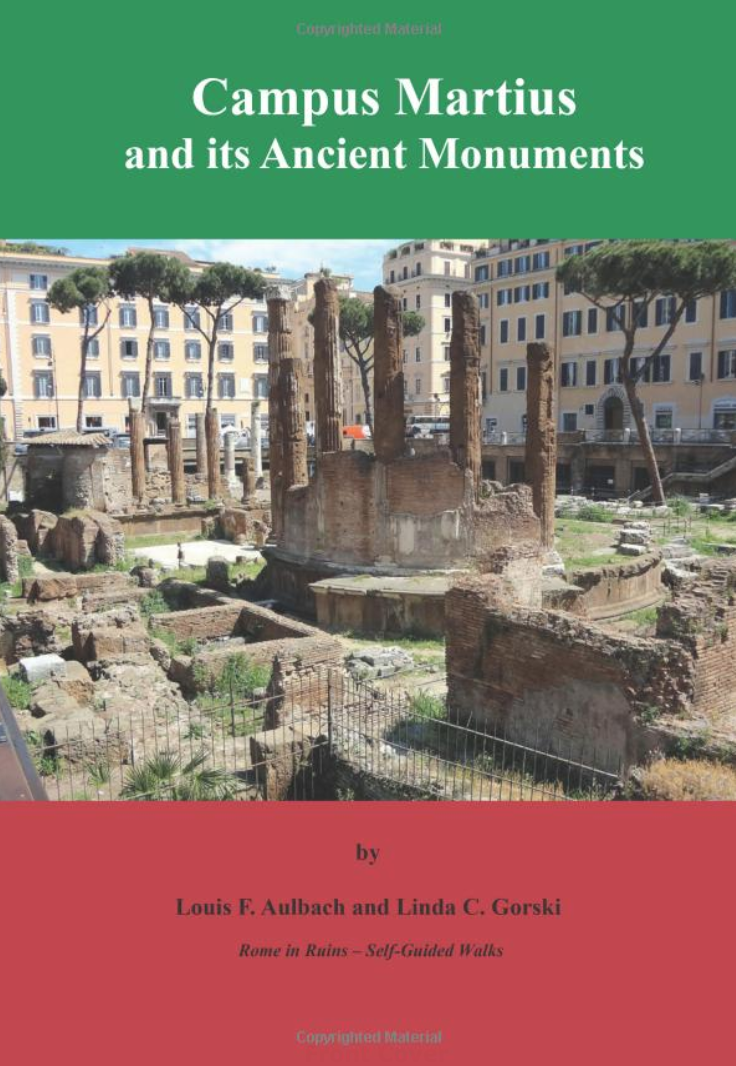