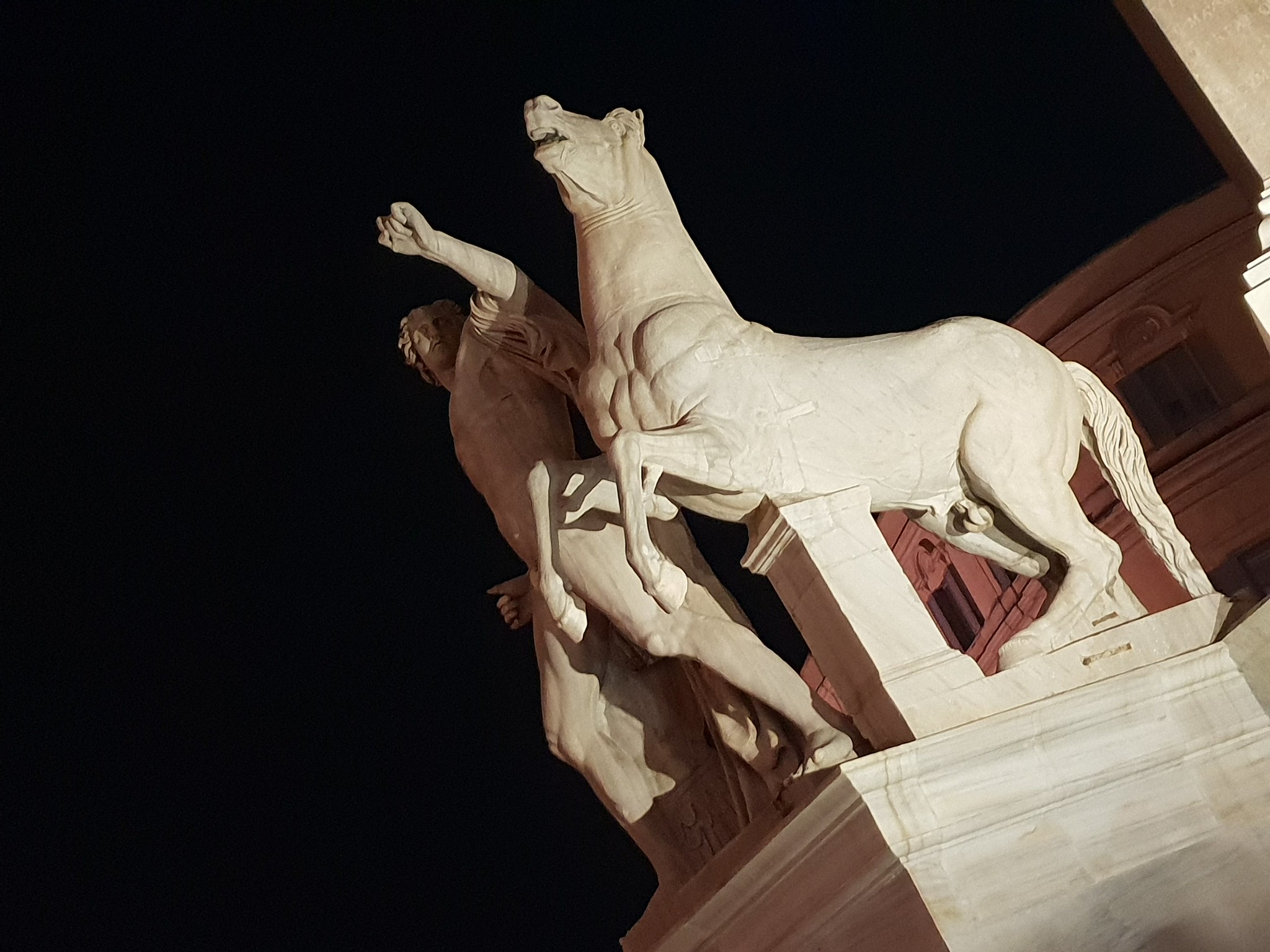 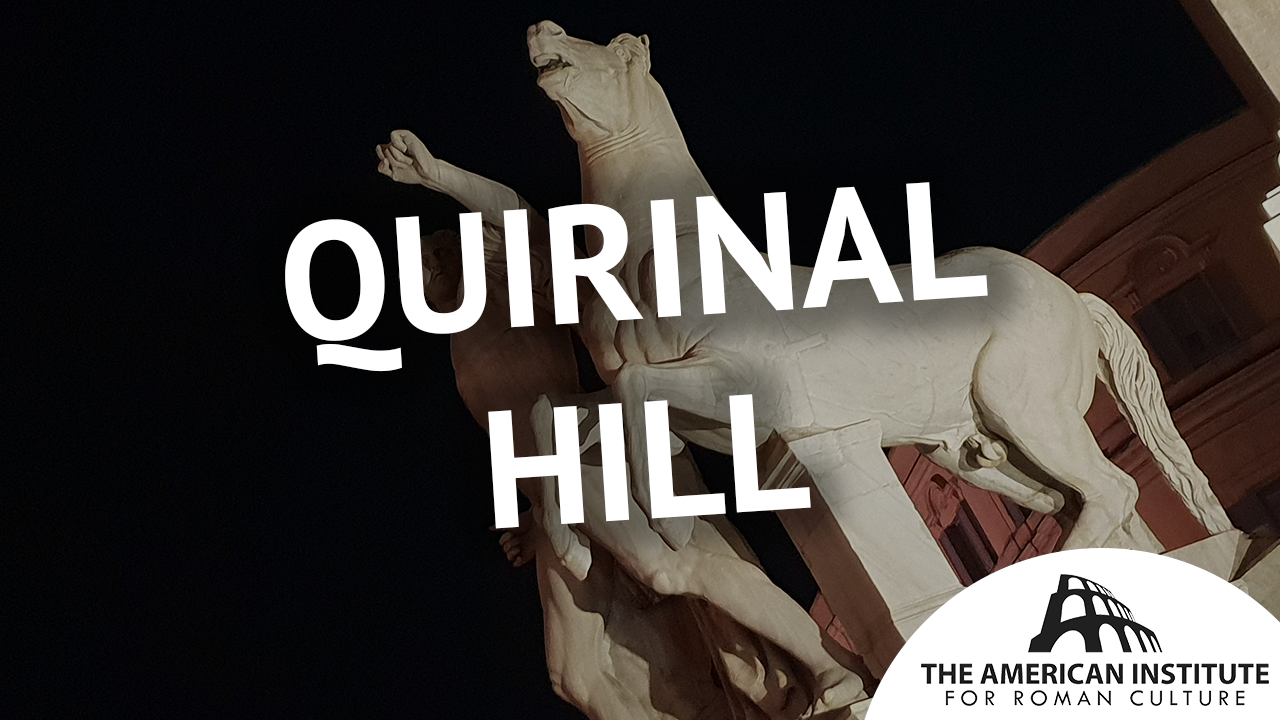 The most northerly of the traditional seven hills of Rome, which stretched from the northern extension of the Esquiline plateau in a south-westerly direction. It is a narrow irregular tongue, separated from the Viminal on the south by the depression now traversed by the Via Nazionale, and sloping off more gradually on the north and north-west to the campus Martius and the valley occupied during the late republic by the HORTI SALLUSTIANI (q.v.).

The length of this tongue from the porta Collina in the Servian wall to the collis Latiaris (see below) is a little more than two kilometres. While there was a fairly deep depression between the Capitol and the Quirinal, as is shown by the pavement of the street found beneath the column of Trajan, yet the complete division between the two was made by the great excavations for the forum of Trajan. The highest point of the hill seems to have been within the area now covered by the Royal Gardens, for which considerable levelling off was done in the sixteenth and seventeenth centuries (Hulsen, Rom. Antikengarten 85 sqq.). In general, excavations indicate that marked changes of this sort were made both in antiquity (see FORUM TRAIANI) and in more recent times, which have modified both the height and contour of the hill. The height of the Royal Gardens is now 50 metres above sea-level, and that of the Treasury buildings 60 (A. Verri, II Colle Quirinale, Bull. Soc. Geol. Ital. 1908; S. Agata dei Goti (by Hulsen and others) Rome 1924, 3 sqq.).

On the north and west slope of the hill were at least four approaches through cuts or depressions, three of which were marked by gates in the Servian wall, PORTA SANQUALIS, P. SALUTARIS, and P. QUIRINALIS (qq.v.), corresponding to the modern Vie Nazionale, Dataria, and Quattro Fontane. The fourth led up to the top of the hill near the new tunnel under the Royal Gardens (BC 1926, 145-175).

Like the Viminal, the Quirinal was a collis, not a mons (for apparent exceptions-Flor. i. 7. 16; Eutrop. i. 7-see CP 1907, 463-464), and the description of the Argei (Varro, LL v. 51) preserves the names of the parts into which it was originally divided-collis Latiaris, the southern end; collis Mucialis, north of the Latiaris from the Via di Magnanapoli to the monte Cavallo; collis Salutaris, from Monte Cavallo to the church of S. Andrea; and collis Quirinalis, from this point east. The derivation of the first two names is unknown (HJ 399-400), and they, together with Salutaris (cf. SALUS), evidently passed out of use at an early date. Quirinalis then became the proper designation of the whole hill. This name was derived by Roman antiquarians from the inhabitants of the Sabine town Cures, who settled on this hill and were afterwards incorporated in Rome (Varro, LL v. 51; Fest. 10, 254; Jord. i. 2. 179-180), or from the god Quirinus, who was identified with Romulus (Ov. Fast. ii. 511; for the literature of the disputed etymology of Quirinalis, see WR 153; Walde, Lat. etym. W6rterb. s.v.). Whatever the true derivation, there is no doubt that, during the historical period, the hill was regarded as having been named from the god QUIRINUS, whose temple (q.v.) stood near the porta Quirinalis. Festus states (io, 234) that this hill was first called Agonus, but this is probably only an invention of the antiquarians.

The Quirinal is not enumerated among the hills of the Septimontium, and did not become a part of Rome until the organisation of the Four Regions, when, with the Viminal, it formed the third, Collina. There are traces of primitive settlements on this hill, and the tradition that they belonged to Sabines is probably founded on fact (for a discussion of these primitive settlements, see Pinza, Mon. L. xv. 776-781, pl. xxvi.; RE i. A. 1016-1008, and for the early cemeteries, see HJ 397, 398; Pinza, Mon. cit. 248-264). The Servian wall ran along the north-west edge of the Quirinal from the collis Latiaris to the porta Collina, where the agger began, and ran almost due south (see MURUS SERVII TULLII). In the Augustan division of the city the Quirinal fell into Region VI, which was afterwards called Alta Semita, from the main street that ran along the ridge of the hill, and corresponded nearly to the Vie del Quirinale and Venti Settembre. There were many temples on the Quirinal, and it became one of the principal residence districts for the wealthy (cf. DoMus), while a very large portion of its entire area was occupied still later by the baths of Diocletian (for the complete topography and monuments of the Quirinal, see RhM 1894, 379-423; HJ 394-443; P1. 484-506; RE i. A. 1016-1017).

Where in Rome is the Quirinal Hill?

Created by The American Institute of Roman Culture, published on 08/07/2020 under the following license: Creative Commons: Attribution-NonCommercial-ShareAlike. This license lets others remix, tweak, and build upon this content non-commercially, as long as they credit the author and license their new creations under the identical terms. Please note that content linked from this page may have different licensing terms.