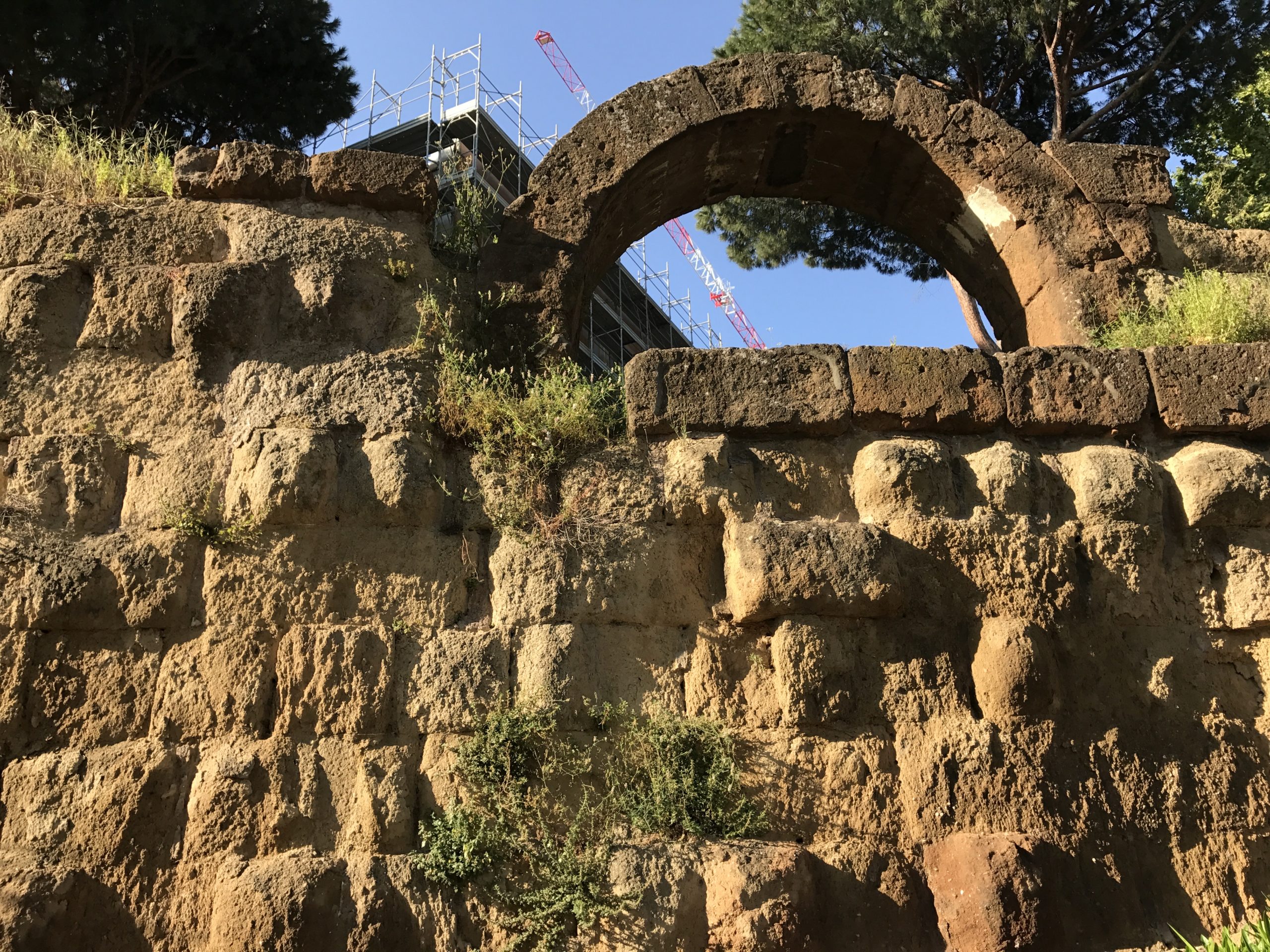 The Servian Wall is Rome’s early wall encircling approximately 1000 acres, 4 meters thick and 10 meters in height. It is attributed to Servius, Rome’s sixth king (traditional dates 575-535 BC). Although there are segments that are preserved from this period, (cappellaccio tuff use) the majority of the circuit that surrounds Rome dates to the 4C BC, namely after Rome controlled Veii’s quarries of “grotta oscura” tuff, in part in response to the famous Gallic sack of Rome in 390 BC.  The circuit, parts of which are most visible and best preserved are in front of Termini train station and on the Aventine hill, includes within its borders the following areas:

Hannibal considered attacking Rome during the Second Punic War but was put off from besieging the city when he observed the scale of the walls (Livy, History 26.10.2-5, 26.11.5-6). The walls were breached during Rome’s late Republican civil wars (e.g., Colline Gate in 82 BC).

You may trace many portions of gate and walls in the following areas:

There is considerable discord in the tradition as to which hills were added to the city by which kings (see POMERIUM) ; but the statement that Servius Tullius added the Esquiline and the Viminal (Strabo cit.; cf. Dionys. iv. 13) is consistent with the facts (Jord. ii. 206-208, cf. figs. I, 3).

It is probable that the original settlements on the Palatine, Capitol, Quirinal, etc., had no stone walls, but relied on natural features or sometimes on earthworks, e.g. MURUS TERREUS CARINARUM (q.v.).

There are remains of a wall in smallish blocks of grey tufa (cappellaccio) at various points on the line of the later enceinte, which are usually (despite the denial of Carter in Proc. Amer. Phil. Soc. xlviii. (1909), 136) assigned to the original wall of Servius Tullius of the sixth century B.C. (Jord. i. I. 252-253).

Of these fragments of wall, (a) and (e) undoubtedly belonged to the outer line, while (b) was the retaining wall at the back of the agger, which, no doubt, existed from the first. Of (d) we can say nothing certain, and (c) may belong either to the Palatine or to the Servian enceinte.

To ascribe them to the wall of the city of the Four Regions is impossible, as (a) and (b) would both then be excluded; and it is very doubtful if this city ever had a wall of its own.

Frank maintains (TF 117, 18) that the battering back of the courses, the use of anathyrosis and the presence of walls of Grotta Oscura tufa of the fourth century B.C. in conjunction with these fragments, are sufficient to make it probable that they should also be assigned to the same period.

It seems, however, more likely that the cappellaccio wall should, as far as our knowledge goes at present, be attributed to the sixth century B.C.2

The line of wall (text fig. 3) began at the Tiber, crossed the low ground to the south-west corner of the Capitol, ran north-east along the edge of the cliffs of this hill and the Quirinal, until it almost reached the head of the valley between the Quirinal and the Pincian (Collis Hortorum). Then it ran southwards across the tableland of the Esquiline, crossed the valley between the mons Oppius and the Caelian, followed the cliffs on the south-east and south of this hill, then probably followed the south-west side of the Palatine, and thence ran south of the forum Boarium to the Tiber again.

It is possible that we should attribute to the enceinte of this period an arch with a span of 12 Roman feet (3.30 metres), found in 1885 forty metres south of S. Maria in Cosmedin and constructed of voussoirs of cappellaccio (NS 1886, 274; cf. AJA 1918, 175-176). Its left (south- east) side joined a wall of the same material, which ran into the hill. A paved road passed through it, which was taken to be the CLIVUS PUBLICIUS (q.v.), but it had been blocked up by a wall in opus reticulatum. Borsari (BC 1888, 21) maintained that it was the PORTA TRIGEMINA (q.v.), but it is most improbable that the road passing through it would have been blocked up at so early a period as the second century A.D. Nor, as Hulsen points out (Mitt. 1889, 260), does its position suit what we know of the line of the Servian wall. Frank (AJA cit.) attributed it to the wall of the ‘City of the four regions’, omitting the Aventine; but later, apparently forgetting the information he had obtained from Lanciani (who stated that, as far as he could remember, the material was cappellaccio), he assumed that the material was Fidenae tufa, which is full of scoriae, and that it belonged to the Palatine wall of the fourth century B.C. (TF 95, 96).

It is probable that a consequence of the Etruscan victory over the Romans at the beginning of the Republic was the dismantling of the fortifications of the city. A treaty such as that concluded with Porsena, in which the Romans were forbidden to carry weapons of iron (Plin. NH xxxiv. 139; Mommsen, Rom. Hist. i. 414), would doubtless have included this: and the success of the Gallic invasion can hardly be understood Prof. Hulsen has kindly communicated this view to me, and I fully agree with it. unless Rome was an open town.3

As the result of the Gallic invasion, the whole enceinte was enormously reinforced and strengthened, the original line, however, being for the most part, if not entirely, retained.

To the construction of this wall the following passages have generally been referred:

It is natural that so great a work as this should have taken a considerable number of years to build.

To this reconstruction belongs all the masonry of larger blocks. Frank remarks that, though the majority of the blocks measure 58-61 cm. high, there is a good deal of irregularity even on the outer face, where he has noted measures as low as 51 cm. and as high as 64, while on the inside, where the agger conceals the blocks, the measurements vary from 40 to 68 cm. The material, however, is entirely Grotta Oscura tufa ; and this seems an even clearer test than that of measurement. The quarry marks too (Ann. d. Inst. 1876, 72; Richter, Antike Steinmetzzeichen) cannot be referred to an earlier period than the fourth century B.C., and, as the stone came from the Grotta Oscura quarries, in the territory of Veii, soon after the fall of that town, it is suggested that they may be Etruscan rather than Roman (AJP 1924, 68-69). In this enceinte the Aventine was for the first time probably included; and a fine piece of wall belonging to it may be seen in the depression between the greater and the lesser Aventine in the Via di Porta S. Paolo. As this meant an increased weakness from the defensive point of view, it was quite natural that the builders of the original wall should have left it and the valley of the circus Maximus out of their scheme (Ann. d. Inst. 1855, 87-92; Klio 191, 93; AJA 1918, 78; TF 119, 20,where,asitstands,itisattributed to 90-80 B.C., but the presence of blocks from the fourth century wall is maintained). The continuation has been cleared to the north-west of it on the greater Aventine (Gnomon, iii. 191, 192) and is almost entirely of Grotta Oscura tufa.

From the porta Collina to the porta Esquilina, where the Servian wall, instead of following the edge of the hill, was obliged to cross the tableland at the base of the Quirinal, Viminal and Esquiline, it was strengthened by a great mound, described by Dionysius (ix. 68; cf. iv. 54) as seven stadia in length and 50 feet thick, with a ditch in front of it 30 Roman feet deep and 100 wide (Cic. de Rep. ii. I I; Varro ap. Censorin. 17. 8; Strab. v. 3. 7, p. 234; Plin. NH iii. 67; xxxvi. 104). The porta Viminalis was the only gate which passed through this part of the fortifications, which were further strengthened by towers. With a part of the outer wall of the agger near by, it is still preserved in the railway station. Another piece may be seen in the Piazza Manfredo Fanti (LF 23).

Other parts of the enceinte were fortified in the same way; but this was the agger par excellence, and long after its function had ceased it is spoken of by ancient authors as a prominent feature (Hor. Sat. i. 8. 13: aggere in aprico spatiari; see PUTICULI; Juv. 8. 43: ventoso sub aggere), and it was indeed the highest point in Rome. It was thus used to denote a quarter of the city (pomarius de agger(e) a proseucha, CIL vi. 9821); and (in contrast with the campus Viminalis sub aggere of the Notitia, which lay between the porta Viminalis and the castra Praetoria; Mitt. 1891, 113) we get a district known as super aggerem (Hist. Aug. Elag. 30: cum alter maneret in Capitolio, alter in Palatio, alter super aggerem, alter in Caelio, alter trans Tiberim), and it survived as a local name in the form Superage as late as 1051 (in loco quivocatur Superage non longe a Sancta Maria Maiore), from which the church took the name of Superagius (ASRSP 1889, 199-213; De Rossi, Piante 13), and even in 1527 (Fulvius, antiq. 1. ii. f. 21 ter, G.i.).

Many other portions of the wall are preserved, but are too insignificant to deserve separate mention, with the exception of an arch on the slope of the Quirinal, in the modern Palazzo Antonelli,4 which is only 1.05 metres in span, and therefore not a city gate (TF 120, who attributes it to 87 B.C.). For the remains on the Capitol, see ARX.

We cannot admit either that the Palatine was still a separate community when the wall of blocks 2 feet high was built on its north-west side or that this wall was part of a larger enceinte; and we must therefore suppose that it continued to be separately fortified as late as the fourth century B.C. as an additional internal citadel or fort (CR 1902, 336; YW 1907, 22).

1 Another piece was found in 1926 with possible remains of a postern, almost opposite the entrance to the offices of the Museo Nazionale Romano (Museo delle Terme) in Via Gaeta (YW 1927, 103).

2 To attribute it to the fifth or the earlier part of the fourth, and the agger itself to the sixth, supposing that neither the inner nor the outer walls were integral parts of the original agger (PI. 45, 115, 116), is simply to leave the agger in the air, as either of its ends could easily have been turned. Of course it might be a tenable hypothesis, admitting that’ all weak points of the circuit were fortified in this way’ (LR 62; cf. NS 1884. 223; BC 1892, 284) that there was at first no wall connected with any of the aggeres and that for the rest of the line the cliffs of the various hills were considered to afford sufficient defence, but it seems to be highly improbable.

3 Prof. Hulsen has kindly communicated this view to me, and I fully agree with it.

4 The statement in Gnomon, i. 300, that a piece of the Servian wall had been found in the Via Mazzarino rests on a misconception of the position of this arch and of the line taken by the wall, and is, further, incorrect, as the blocks were not in situ.

Where in Rome are the Servian Walls?