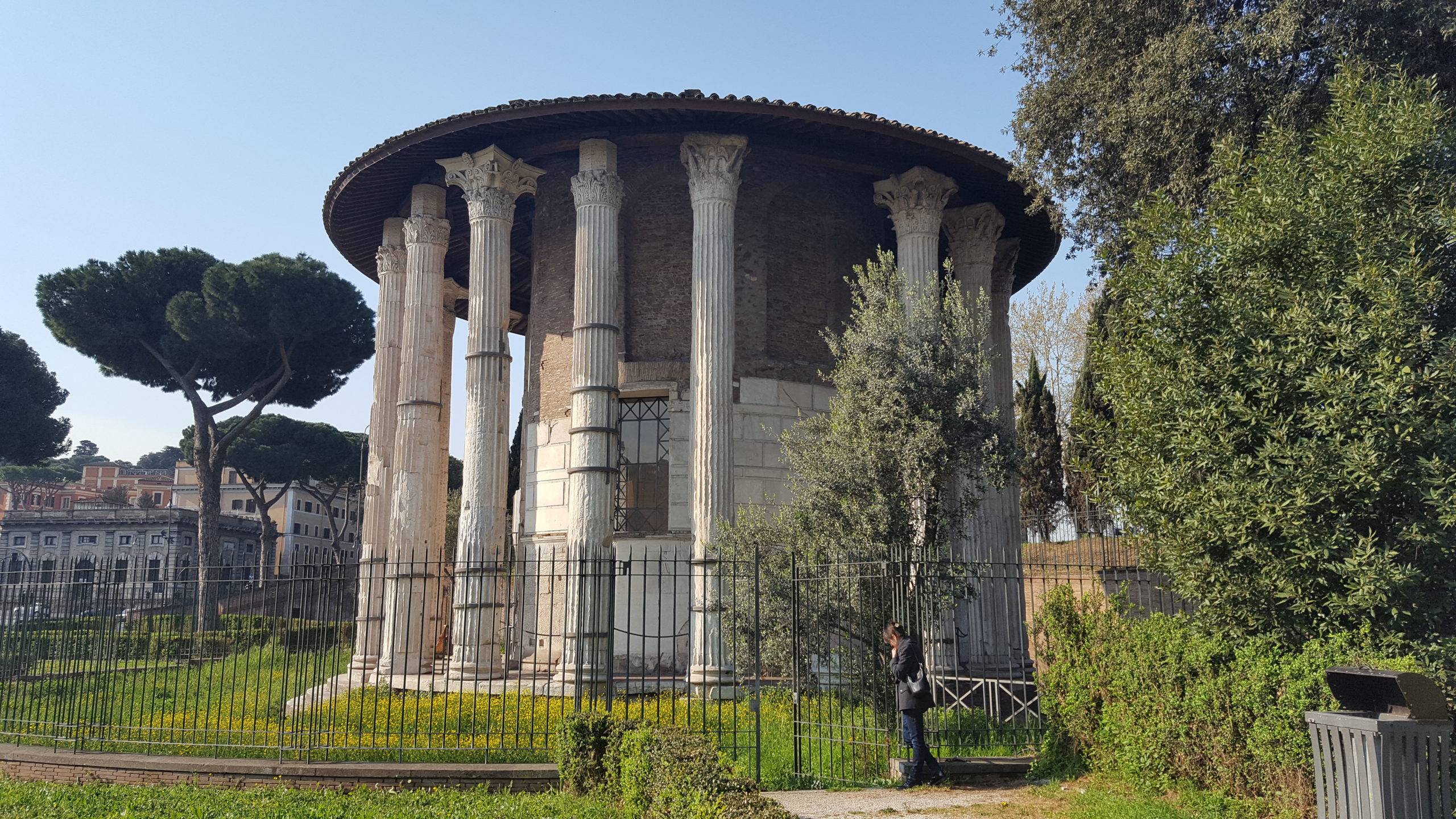 Located in the Forum Boarium, this is the oldest, extant marble temple in Rome.  The round temple is constructed out of Pentelic marble (quarries near Athens), and this marble type, craftsmanship of the marble and its architecture style indicate that Greek artisans created the temple for a Roman patron. Fire damage led to some columns being replaced in the reign of Tiberius. The temple is so well preserved because it was converted into a church at least in the 12C, but probably earlier, dedicated to S. Stephen of the carriage makers.  It was subsequently stripped of its Christian accoutrements in the early 19C AND restored by Valadier (who also restored the Arch of Titus). Inside there are a few frescoes from the Christian-period decoration. There were many temples in the Forum Boarium dedicated to Hercules. Scholarship identifies this one as Hercules Olivarius or Hercules Victor; there were 3-4  temples dedicated to Hercules in the Forum Boarium.

It was recently restored by World Monuments Fund. 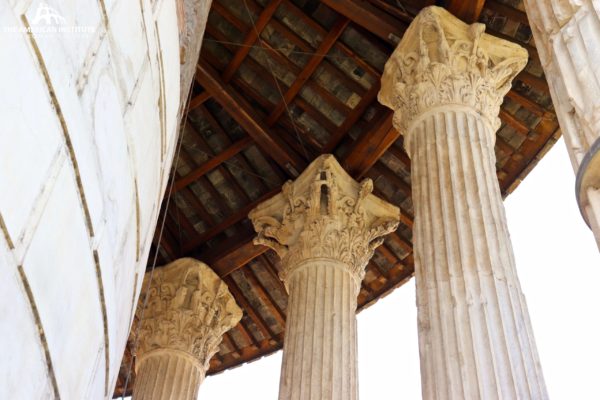 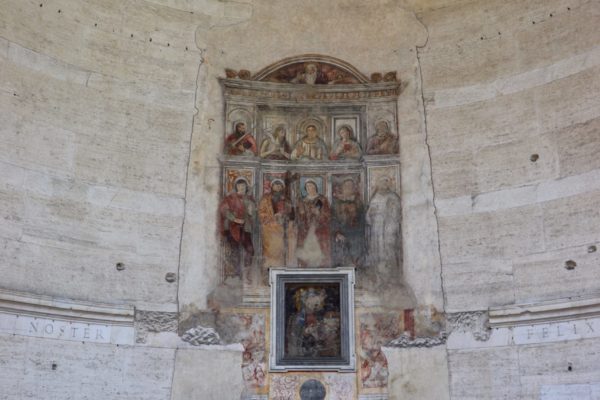 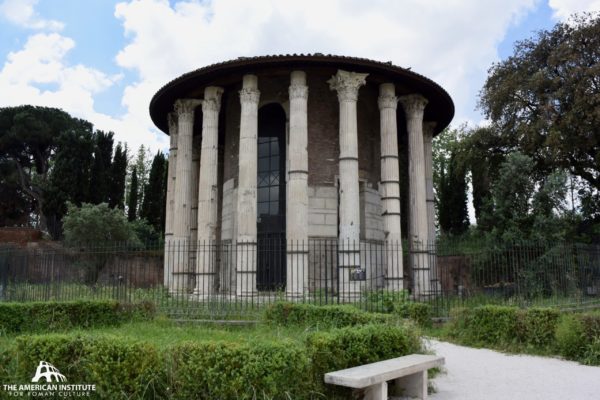 HERCULES VICTOR (INVICTUS), AEDES, a round temple of Hercules in the forum Boarium (Liv. x. 23. 3: in sacelloPudicitiae patriciae quae in foro Boario est ad aedem rotundam Herculis; Fest. 242; Macrob. iii. 6. 10: Romae autem Victoris Herculis aedes duae sunt, una adportam Trigeminam altera in foro Boario). It was decorated with frescoes 1 by the poet Pacuvius (Plin. NH xxxv. 19), and is probably the temple into which neither flies nor dogs were said to enter (ibid. x. 79 : Romae in aedem Herculisin foro Boario nec muscae nec canes intrant). The fact that this same story is found in Solinus (i. io), who speaks of a consaeptum sacellum, and in Plutarch (q. Rom. 90:ἐντὸς τῶν περιβόλων), makes it somewhat uncertain whether it was told originally of the precinct of the ARA MAXIMA (q.v.), or of this temple.

The passage in Festus (242: Pudicitiae signum in foro bovario est ubi familianaaedisset Herculis) has occasioned much discussion. If Scaliger’s emendation-ubi Aemiliana aedis est Herculis-is accepted, the natural inference would be that the round temple of Hercules was restored by L. Aemilius Paullus (Jord. i. 2. 483, n. 58; WR 275, n. 4; RE viii. 556, 557, 558, 560; Rosch. i. 2903, 2904, 2905, 2909). This emendation, however, is purely conjectural (see PUDICITIA PATRICIA). If Tacitus (Ann. xv. 41: et magna ara fanumque quae praesentiHerculi Areas Evander sacraverat) is referring to this temple, as some believe, it was injured in the fire under Nero, but it must have been restored very soon, and Pacuvius’ frescoes must have been preserved (Plin. loc. cit.).

During the pontificate of Sixtus IV (1471-1484) the remains of a round temple near S. Maria in Cosmedin were destroyed, but the building is referred to by archaeologists of the period (e.g. Pomponius Laetus, Albertinus). A drawing made a little later (1503-1513) by Baldassare Peruzzi,2 of the plan and fragments (Vat. Lat. 3439, f. 32; De Rossi, Ann. d. Inst. 1854, pl. 3 ; Altm. 33-36), shows a structure not unlike the existing round temple which is the church of S. Maria del Sole. This temple stood just north of the Piazza di Bocca della Verita, between it and the Piazza dei Cerchi, north-west of the probable site of the ara Maxima (DAP 2. vi. 241, 242 sq.). The discovery of the gilded bronze statue of Hercules, of the second century A.D. (HF 1005 ; Cons. 282), 258</258> caused it to be identified with the aedes rotunda of Livy, an identification assisted by the further discovery in the immediate vicinity of a series of dedicatory inscriptions to Hercules Invictus (CIL vi. 312-319). These inscriptions, however, might belong to the ARA MAXIMA (q.v.).

2 It is from the St. Germain MS. of Ligorio that we learn this: Panvinio (Vat. Lat. cit.) does not mention the fact (Altm. cit.).

Where in Rome is the Temple of Hercules?