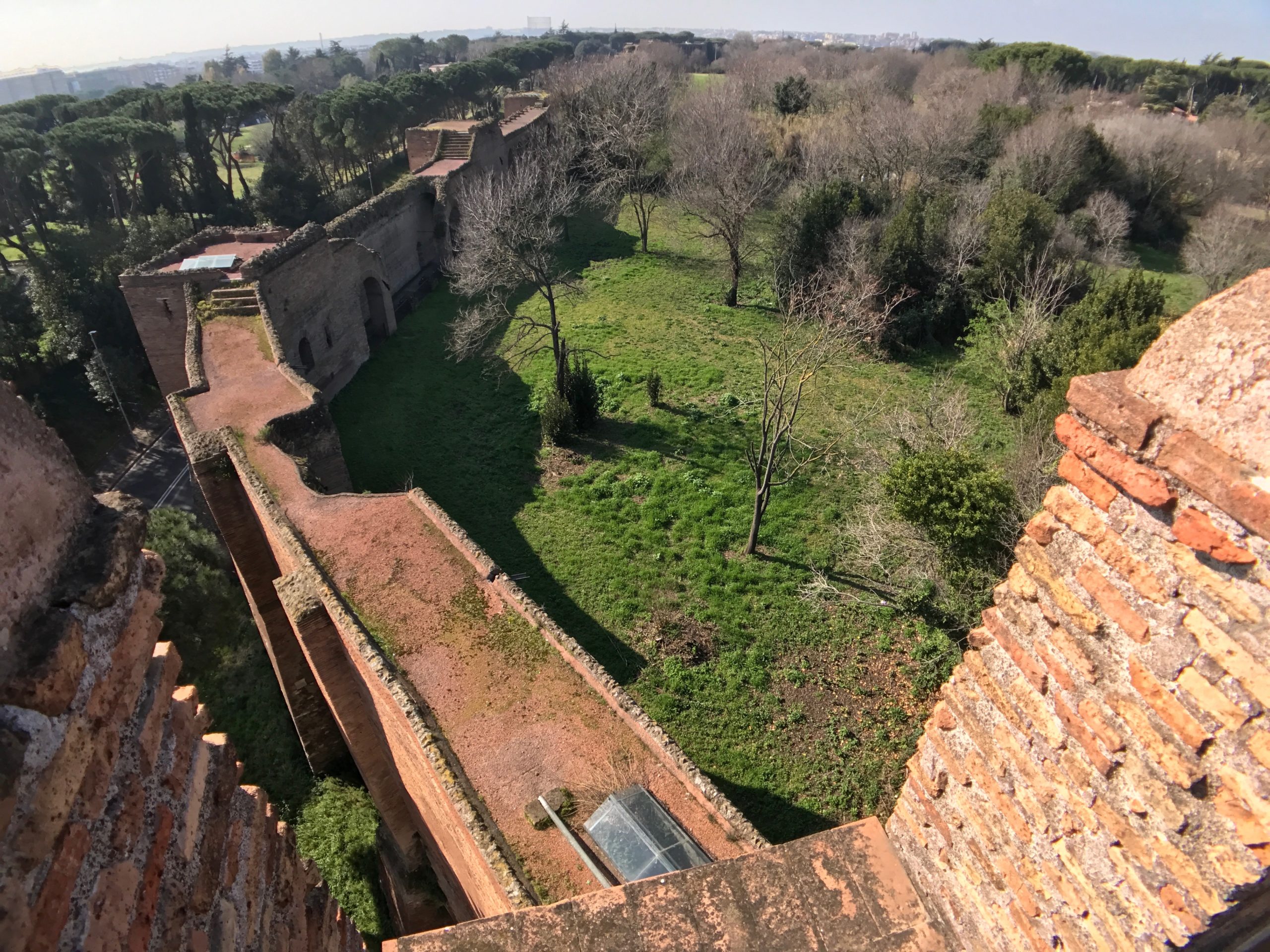 The Aurelianic Wall was the imperial wall circuit that was constructed hastily by the emperor Aurelian, between 271-275 to protect Rome from impending invasion. The massive circuit 19 KM in length (3.5 m thick and 8 m high), encompassing the city limits of 3500 acres was constructed quickly by incorporating several structures in its path.  Approximately 2 of the 12 mile circuit consist of preexisting monuments such as the Castra Praetoria, aqueduct channels, including the Porta Maggiore gate, Castrense amphitheater. various apartment buildings, and tombs such as the Tomb of Cestius. Honorius (401-403) doubled the height fo the walls to 16 m and they remained in use of defend Rome throughout the medieval, Renaissance, Italian Unification, and even second world world battles.

One-third of the whole circuit and all the gates are said to have been destroyed when the city was stormed by Totila, but this is an exaggeration (Procop. BG iii. 22, 24); it was restored by Belisarius.3 Of the Popes, Hadrian I and Leo IV (the latter adding the Civitas Leonina) were especially active in repairing the walls (LPD i. 518, n. 48; ii. 137, 138); the Roman senate repaired them in 1157 (v. PORTA METROVIA), and much was done by the Renaissance popes, as their arms show. The greater part of the circuit remains, except along the river from near the porta Flaminia to the pons Aurelius on the left bank, and from the porta Aurelia to the porta Portuensis on the right bank. The former disappeared in the Middle Ages (ASRSP 1879, 79-121; 137-171), and the latter under Urban VIII, who brought the new porta Portese about 500 metres nearer the city (for the towers on the river-bank, see Roma iii. (1925), 317), and connected it and the porta Aurelia (S. Pancrazio) by a new line of fortifications with the Leonine city, which had been re-fortified by Paul III and Pius IV.

Otherwise, the line of the walls has remained unaltered since the time of Aurelian, except for the construction of a great bastion by Antonio da Sangallo the younger for Paul III (see PORTA ARDEATINA), in pursuance of a scheme which was not continued; and comparatively few openings for traffic have been made, despite the growth of the modern city. The line selected was the octroi boundary of the time of Commodus, which was marked by cippi (CIL vi. 1016a-c, 8594, 31227; BC 1892, 93 sqq.; LR 71, 72; Mitt. 1897, 150-156; cf. infra, fig. 2). Existing buildings were incorporated in this, and subsequently in the wall, for about one-sixth of the total length (such as the supporting walls of the horti Aciliorum and horti Sallustiani, the castra Praetoria, the arches of the various aqueducts, from porta Tiburtina to porta Maior, and the Amphitheatrum Castrense). For the haste with which the work was done, see BC 1892, 104-106; LR 70-71.

Though the various restorations of which evidence may be seen in the walls themselves have not yet been brought into relation with the scanty historical evidence we possess, it is clear that originally the wall was not more than 25 feet high, and that it has since been heightened and the arcades added (see Richmond in Discovery vi. (1925), 293-295, and in BC 1927, 41-67).

The walls as they now stand form one of the finest products of the science of Roman fortification. They are built of concrete faced with brick, are about 12 feet thick, and of varying height, the ground level inside being generally considerably above that outside. 13 feet from the ground inside they are traversed by a sentinel’s passage passing through both curtain and towers, the latter occurring every 100 feet; they are quadrangular, project about 10 feet from the curtain, and rise about 20 feet above the wall (Ill. 33). The gates have double or single archways, according to their importance, with flanking towers, and only some of them have vantage courts. The material used for the walls was largely older brick (BC 1892, 91-93; PAS i. 1-86).

2 The meaning of the phrase egestis immensis ruderibus is not very clear, and the level of these and other gates does not seem to have been raised as much as was hitherto believed (BC 1917, 193-217).

Where in Rome are the Aurelian Walls?