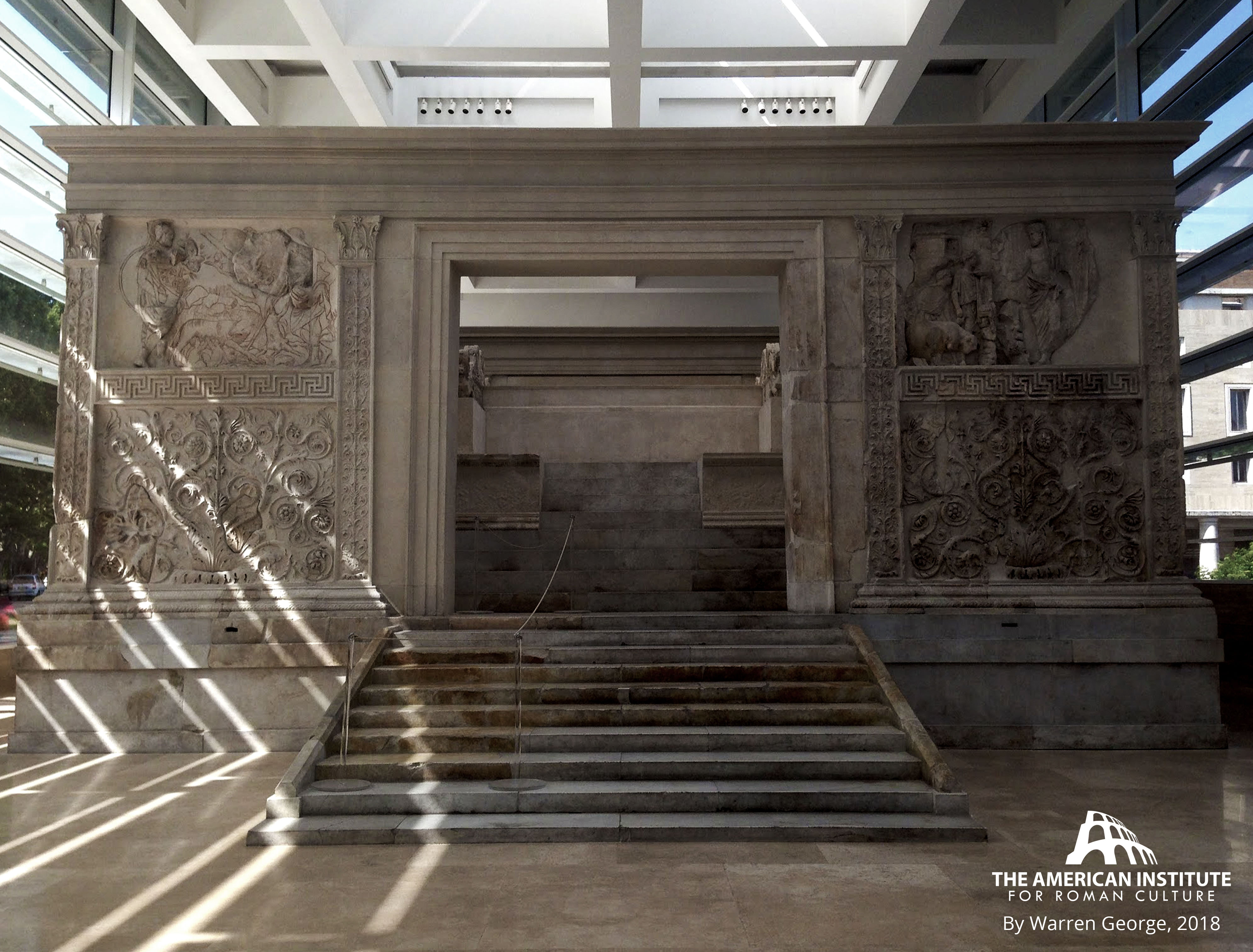 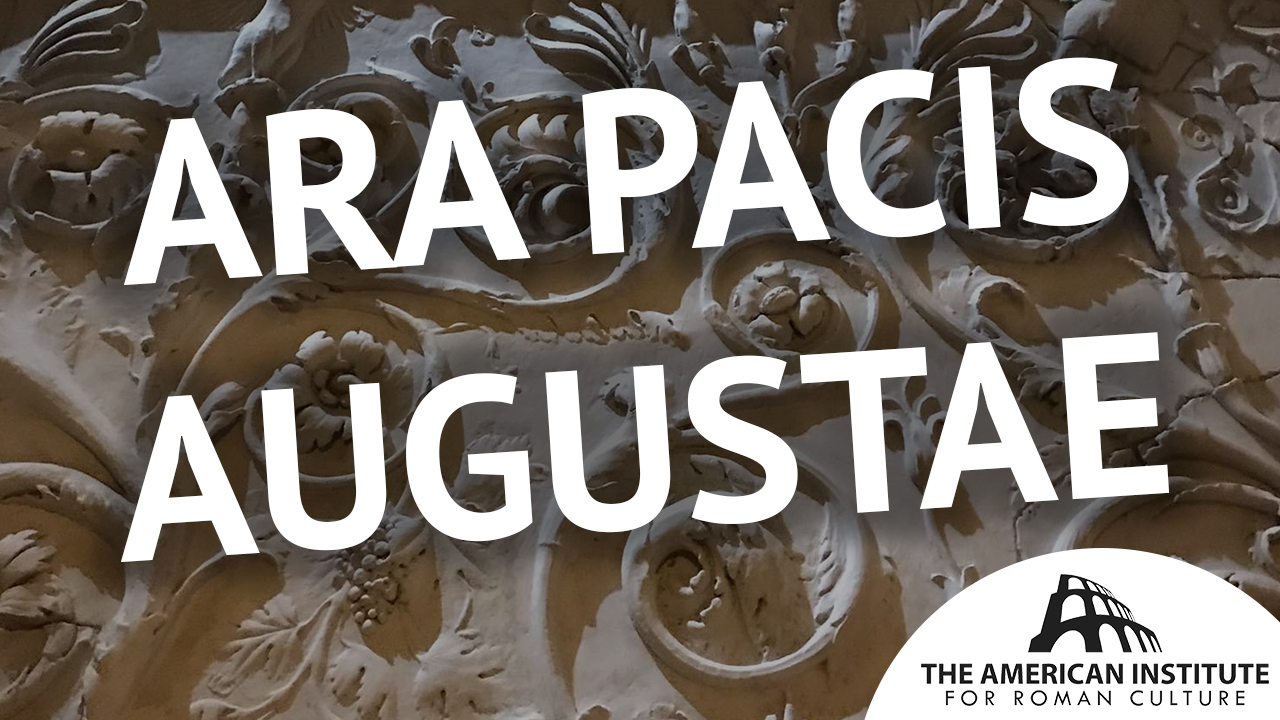 The Ara Pacis is one of the finest sculptural creations from the reign of Augustus, and its level of preservation is remarkable.  It is currently housed in the Ara Pacis Museum, dedicated in 2006 (designed by Richard Meier) which presents the history and rediscovery of the altar with rich multimedia displays, panels, and models.

Ostensibly vowed by the Senate in July 4, 13 BC to celebrate Ausgustus’ safe return to Rome after a few years of absence in Hispania and Gaul, it was dedicated on January 30, 9 BC (coincidentally Livia’s birthday) as a (Augustus, Res Gestae, 8.5, 12.2).

It is constructed of solid blocks of Luna (Carrara) marble, measuring 10.5 m X 10.5 m.  It was roofless, with two entrances through the temenos boundary wall that surrounded the altar. Although the relief panels of the altar itself are only preserved in a few sections (with a processional of sacrificial animals, victimarii attendants, and Vestal Virgins), the outer wall is mostly intact.

On the outer lower lower half of the wall on each of the four sides are acanthus plants and a large variety of flowers in bloom, interspersed with insects, birds, lizards, as a legible array of symbols fertility and abundance that Augustan peace had brought to the city and Empire.  Above, on the N. And S. Sides are a procession of priests and who’s who of Augustan Rome society, including Augustus, Agrippa, and Livia  on the S side.   The E and W panels depict important mythological figures from Roman legend, including the she-wolf and twins, Aeneas making a sacrifice (W) , and Minerva and Venus/ Pax figure with twin babies (E). 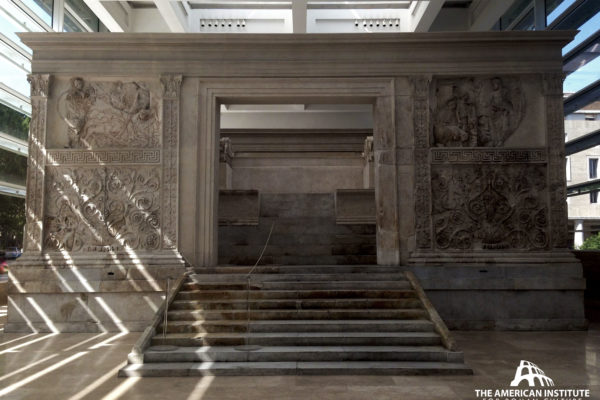 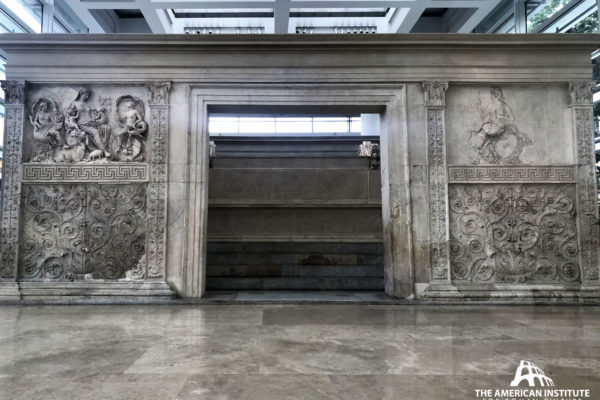 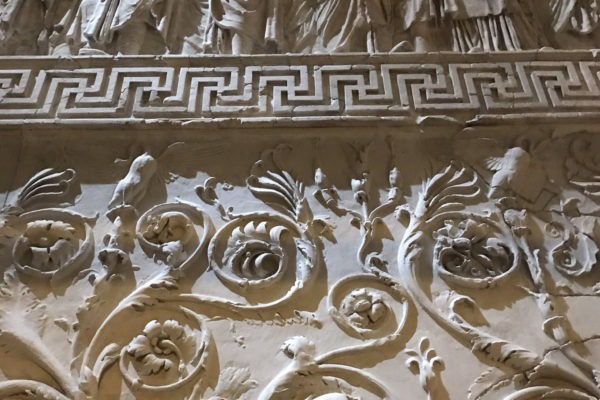 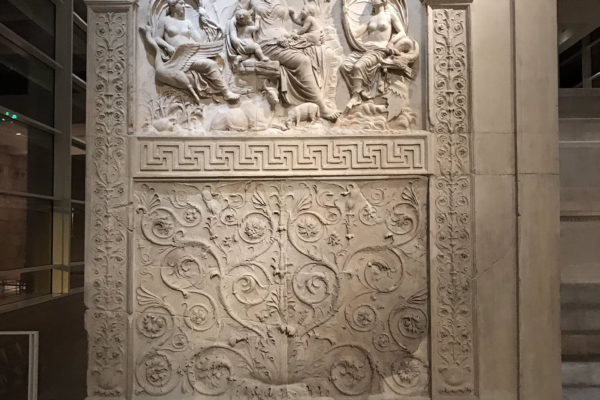 The altar was located in the Campus Martius, with two entrances, on two different street levels, reproduced inside the museum. The East entrance faced the Via Late.  The West faces the river.  It was in close proximity to the Augustan meridian and Gnomon (sundial obelisk from Egypt).

With the passing of time, and continual flooding of the Tiber River, the altar was slowly buried, though protected by a new boundary wall in the Hadrianic period.  It all but disappeared from view by Late Antiquity.  Portions were recovered in the Renaissance but too difficult to fully extract, now under a massive palazzo. Only a daring excavation under Mussolini recovered the altar, reassembled in a new museum.  The Fascist era museum, next to the liberated Mausoleum of Augustus, was in use until demolished for the current Ara Pacis museum on the same location.

Like most white marble sculptural constructions, the figures originally were vividly painted, but the color has not been preserved.  Today, through rigorous study and analysis of analogous material in Rome and sculpture throughout the empire, it is possible to discern its original appearance through the use of colored lighting that bathes the monument on occasion, as well as through the use of new VR goggles.  These two non-invasive ways to recreate the original appearance of the Ara Paris Augustae are part for the extraordinary experience offered in the museum alongside videos, models and didactic panels.

Listen now to Darius Arya’s podcast about the Ara Pacis:

This altar stood on the west side of the via Flaminia and some distance north of the buildings of Agrippa, on the site of the present Palazzo Peretti Fiano-Almagià at the corner of the Corso and the Via in Lucina. Fragments of the decorative sculpture, found in 1568, are in the Villa Medici, the Vatican, the Uffizi, and the Louvre; others, found in 1859, are in the Museo delle Terme and in Vienna. They were recognized as parts of the same monument by Von Duhn and published in 1881 (Ann. d. Inst. 1881, 302‑329; Mon. d. Inst. XI pls. 34‑36; for a fragment found in 1899 cf. NS 1899, 50; CR 1899, 234). Systematic excavations in 1903 under the palazzo (NS 1903, 549‑574; CR 1904, 331) brought to light other remains of the monument, both architectural and decorative. The work was not finished, but arrived far enough to permit of a reconstruction which is fairly accurate in its main features, although there are still unsolved problems in connection with the arrangement and interpretation of the reliefs. Most of the fragments then found are in the Museo delle Terme (PT 65‑68), though others still remain on the site.

Where in Rome is the Ara Pacis Augustae?