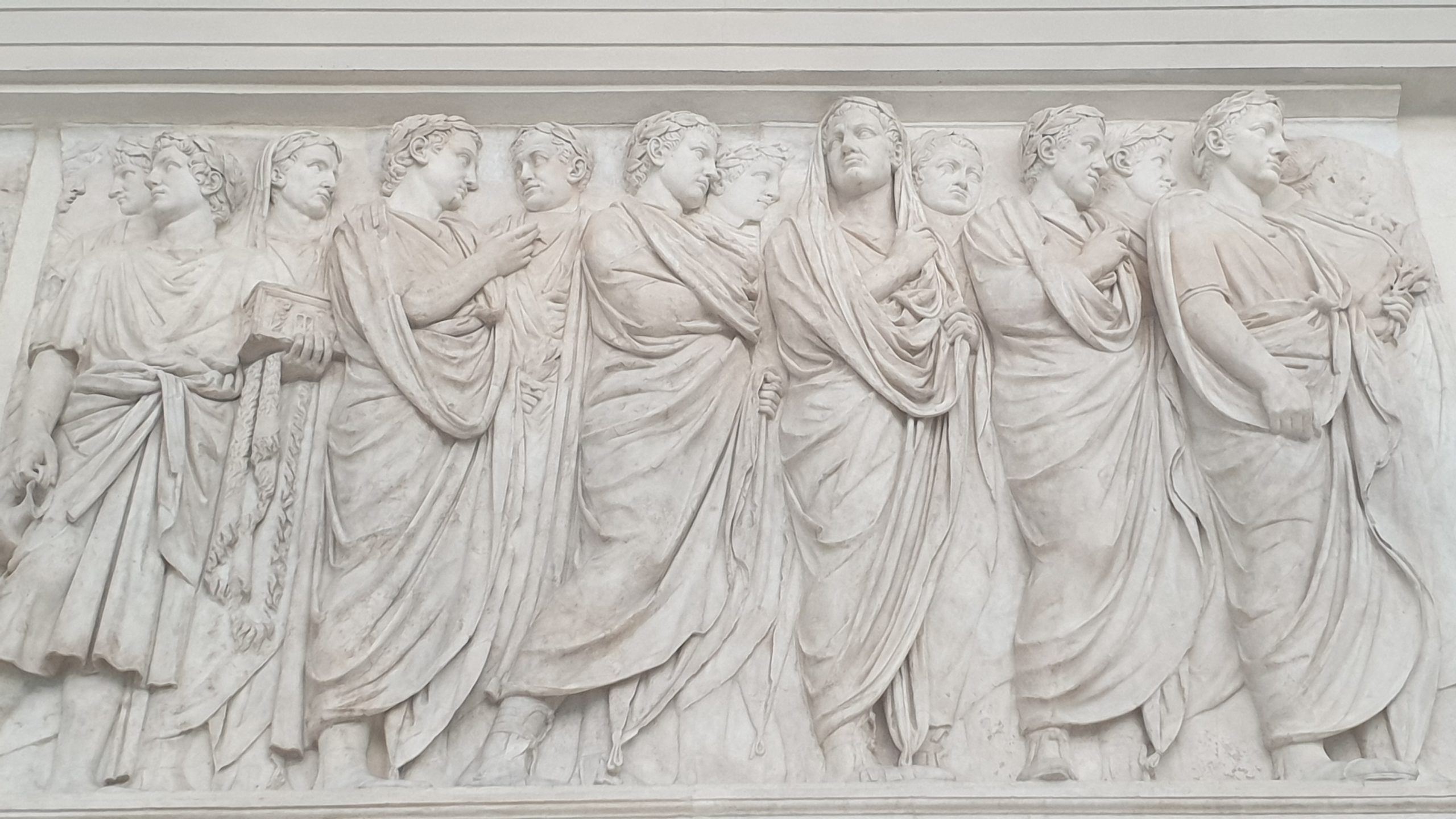 The Ara Pacis of Augustus. It's simply one of the most important and best preserved sculptural creations from the Augustan age: 13-9 BC, now housed in the museum designed by Richard Meier (dedicated in 2006). Watch my FB Live and Periscopes to #discoverMiC #MiCRoma @museiincomuneroma #meetrome

The Ara Pacis is the most famous and best preserved sculptural monument from Ancient Rome of the Augustan age.  As of 2006, the structure has been housed in a new museum designed by Architect Richard Meier.  The modern designed space, well-lit with stunning windows and glass roof, boasts a full array of models, portrait busts, video reconstructions and VR google views of the monument in order to allow the visitor to better contextualize the altar’s original location, purpose, and appearance, once painted in bright colors.
The didactic material charts the vicissitudes that surround the conceptualization of the altar in its original location in the Campus Martius.  Vowed by the Senate on July 4, 13 BCE, it was dedicated on January 30, 9 BCE.  The altar consists of a decorated temenos wall delimiting the sacred from the profane.  It has two entrances to the central space, containing the altar itself.  The outer wall’s upper portions are externally decorated by mythological panels on the east and west sides on either side of the doorways.  The north and south sides are decorated with a religious procession of priests, attendants, and members of Augustus’ family.  The lower half of each wall is covered by intricate vegetal scrollwork, interspersed with flowers from various seasons, as well as birds, insects, snakes. The interior of the outer wall is carved with faux wooden marble slats, bucrania, and fillets and garlands.  The central altar itself is mostly deprived of reliefs.  Only a small frieze of sacrificial animals, attendants and Vestal Virgins indicates its former decorative scheme.   This  marvelous dynastic monument for Augustus’ family, entirely made from solid blocks of Luna marble,  was already partially buried in the Hadrianic era, surrounded by secondary protective fence.  It disappeared from view by Late Antiquity.
Through videos, a model of the Campus Martius, drawings and more, the Ara Pacis’ history comes to life.  Its rediscovery began already in 1568 with the building of Palazzo Peretti.  Further excavations under the palace revealed more fragments in 1859, through 1903.  Full scale excavations were not attempted until the reign of Mussolini, in 1937-1938, with the aid of technological advances that led to the extraction of the remaining portions.   Mussolini’s vision of a new Rome with Augustus as a model also  led to the dismantling of the opera house atop the Mausoleum of Augustus. The Fascist-era Ara Pacis museum was conceived to house the Augustan altar next to the Augustan tomb to underline the reign of Augustus as a reference to Mussolini (a ruler though not a king).  The Mausoleum was once flanked by two bronze tablets with the inscribed Res Gestae of Augustus.  Under Mussolini, the Res Gestae copy was inscribed on the outer wall of the Ara Pacis Museum.  Today, the Meier museum also has a copy of the Res Gestae on the same wall section, facing the Mausoleum, currently under restoration, though a donation from the Tim Foundation. At the end of the project, the two monuments will finally be reunited, each with its own museum space.

Where in Rome is the Ara Pacis Museum?

Created by The American Institute of Roman Culture, published on 04/17/2020 under the following license: Creative Commons: Attribution-NonCommercial-ShareAlike. This license lets others remix, tweak, and build upon this content non-commercially, as long as they credit the author and license their new creations under the identical terms. Please note that content linked from this page may have different licensing terms.