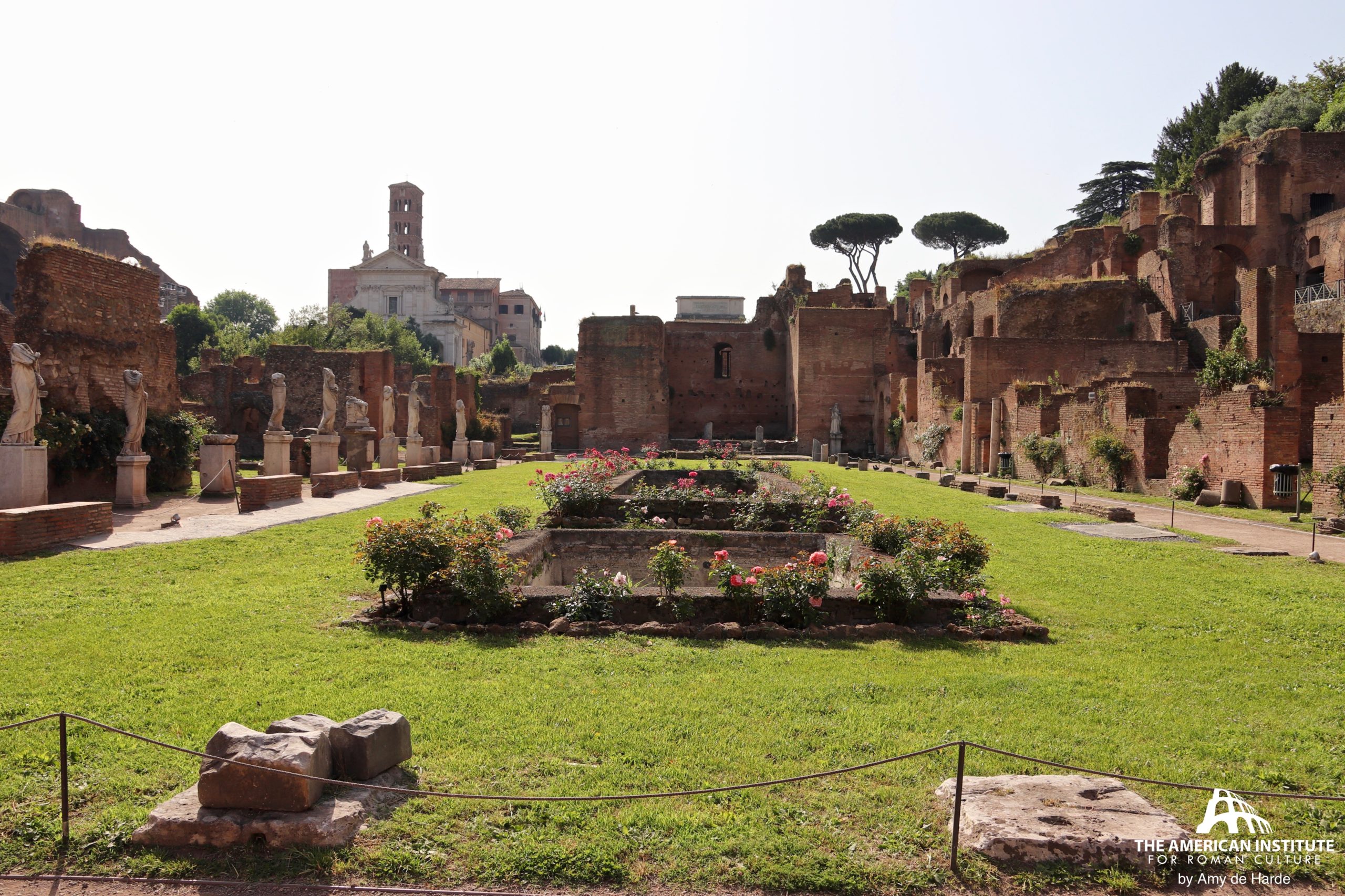 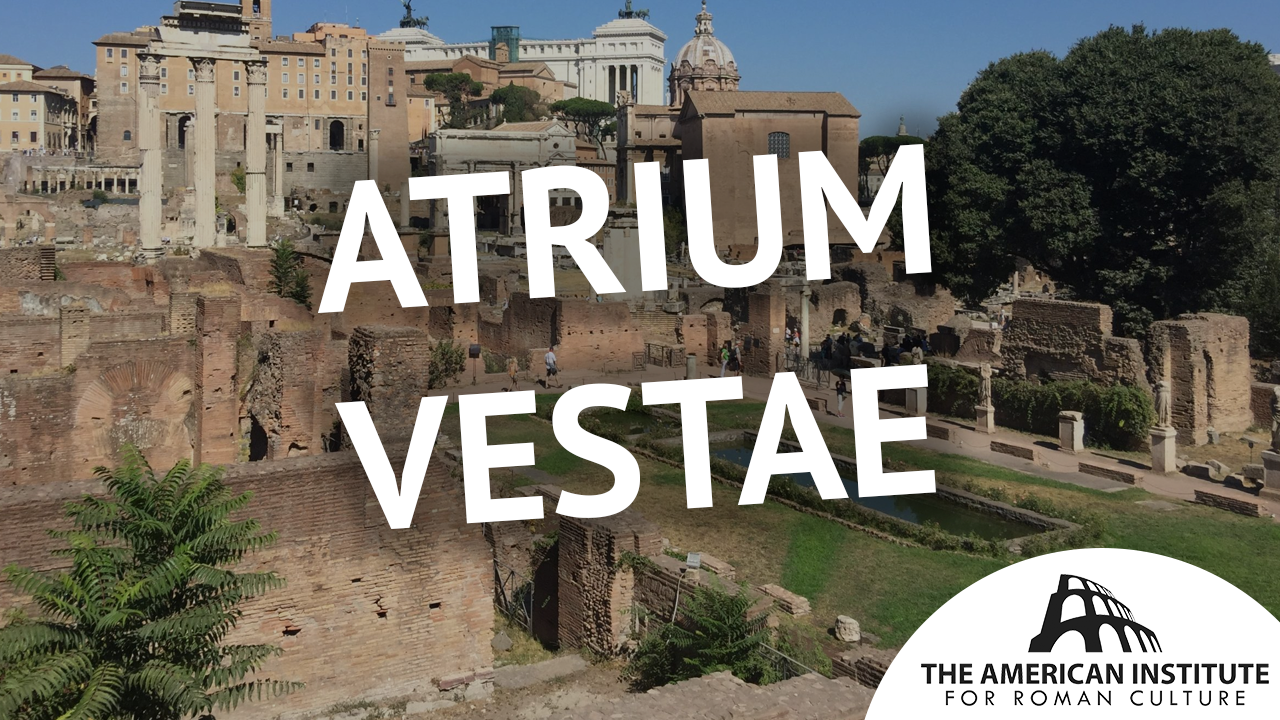 The residential complex of the Vestal Virgins had a long and storied history.  Always situated next to the Temple of Vesta, whose flame was kept by the virgins, the complex was enlarged and modified over time taking up a substantial portion that cut into the Palatine Hill below the Via Nova (originally next to a grove sacred to Vesta), especially under Nero, after the fire of 64,  and Trajan. 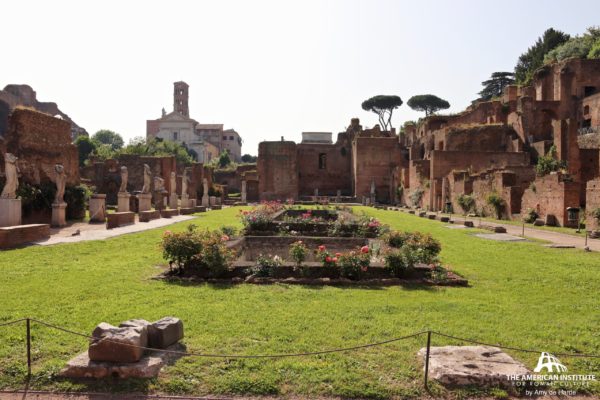 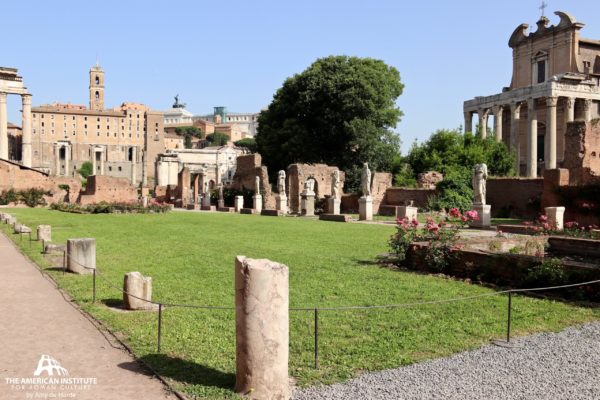 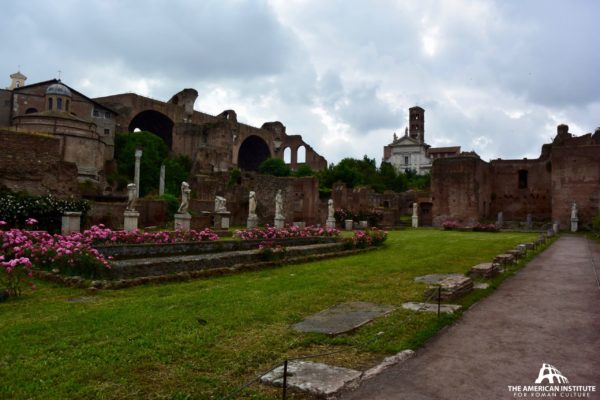 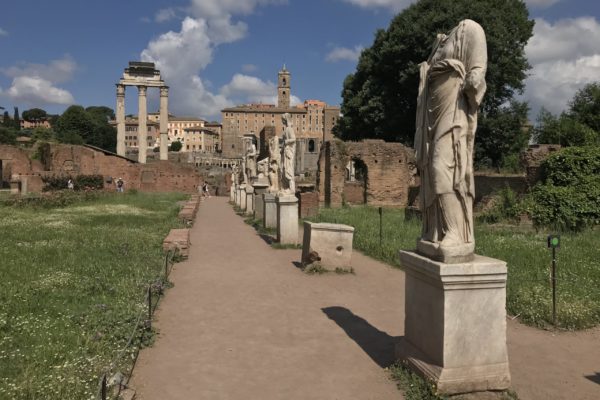 The house of the Vestal Virgins at the foot of the Palatine, just east of the forum proper. By the end of the republic this term had come to mean their dwelling-house, in which sense it is ordinarily used in extant literature (Fest. 333; Gell. I.12.9; Plin. Ep. VII.19.2; Prud. Peristeph. II.528), but originally it included the whole precinct of Vesta (cf. Ov. Fast. VI.263; Serv. Aen. VII.153).

This precinct contained the temple of Vesta (q.v.), the dwelling of the Vestals, the sacred grove, the domus Publica or official residence of the pontifex maximus, and the Regia (q.v.) itself or house of the king. This group was called both Regia and atrium Vestae (Ov. Fast. VI.263‑264: hic locus exiguus qui sustinet atria Vestae | tunc erat intonsi regia magna Numae; cf. the confused terms atrium regium (Liv. XXVI.27.3; XXVII.11.16, in reference to the fire of 210 B.C.) and regia Vestae (CIL VI.511).

The grove, lucus (Cic. de div. I.101; BC 1905, 208‑210; Mél. 1908, 238‑240), originally covered the space between the atrium and the Palatine, but was gradually encroached upon, and finally disappeared entirely, as it would seem. The domus Publica (Suet. Caes. 46) still continued to be the residence of the pontifex maximus until Augustus, on assuming that office in 12 B.C., transferred it to the Palatine (Cass. Dio LIV.27) and presented the domus Publica to the Vestals (Jahrb. d. Inst. 1889, 247). In 36 B.C. Domitius Calvinus built the marble Regia, an entirely separate structure. After the republic, therefore, the precinct of Vesta included the temple, the grove, and the actual dwelling of the Vestals, to which the name atrium was generally restricted. This name would lead us to infer that the court, atrium, was the most prominent part of the precinct, and it was certainly large enough for meetings of the senate ( Serv. Aen. VII.153: ad atrium Vestae conveniebat (senatus) quod a templo remotum fuerat — a disputed passage, cf. Van Deman, Atrium Vestae 10).

These excavations show some remains of the republican atrium, that is, the house of the Vestals, immediately south of the temple, adjoining the domus Publica on the east, with the same north and south orientation. This indicates the antiquity of both, though almost no remains earlier than the second century B.C. are now visible. They consist of a small court with rows of rooms on the south and west sides, with walls and pavements still visible at some points under the north-west corner of the latest building; that of the court is a lithostroton pavement of the Sullan period (JRS 1922, 29). The domus Publica seems to have been larger than the house of the Vestals, and to have occupied all the space between the Sacra via and the earlier Nova via. Its remains, forming virtually a part of the original atrium (there is, in any case, no line of demarcation between the two), lie along the north side of the latest building and were entirely covered up by the road that Nero built here in front of the shops (see below) (TF 85‑86; (Ill. 7)).

Close to the main entrance to the atrium, at its north-west corner, is the podium, about 3 by 2 metres in dimensions, of a shrine, generally called aedicula Vestae, and supposed to have been built to house a statue of the goddess, as the temple itself did not contain any (Cic. de nat. deor. III.80; de or. III.10). This shrine was not built until the second stage of the imperial atrium, for it blocked a door belonging to that period (Van Deman, op. cit. 23). Some fragments of the marble lining and plinth are in situ; and the entablature with an inscription of the time of Hadrian (CIL VI.31578) which records a restoration, together with numerous architectural bits, have been found. The entablature has been placed upon a column and a brick pier (Jord. I.2.290‑291; Der Tempel d. Vesta 25‑28; HC 203; Thédenat 315; LR 226).

The atrium Vestae was probably destroyed in the fire of Nero, and was certainly rebuilt by him, when he remodelled the whole of this quarter in a different form and with a different orientation. It now consisted of a trapezoidal enclosure (in which the temple was included) approximately the size of the later building, with a central court surrounded by rooms on three sides. Against the north enclosure wall was a row of tabernae opening into the arcade leading up to the vestibule of the Domus Aurea (q.v.); and the porticus occupied the whole intervening space between the eastern enclosure wall and the street connecting the Sacra and Nova via to the east (Vicus Vestae?). There is thus no space left for the garden, which, it was thought, might have been a survival of the lucus (see Vesta, Lucus); compare Van Deman, Atrium Vestae pl. A, with AJA 1923, p421 and pl. III, and Mem. Am. Acad. V.124 and pls. 61, 62.

This building was injured by fire, and restored by Domitian, who erected a colonnade around the court, with a long, shallow piscina in the centre, and entirely rebuilt the west end. Hadrian built a block of rooms across the east end, thereby extending the area of the house as  far as the cross street mentioned above; he also closed in the front of the largest room (13 on Van Deman’s plans) on the south, and built new back walls in this and the room next to it. This was continued under the Antonines, the object being to diminish the damp, due to the shutting off of the sun’s rays by Hadrian’s additions to the Domus Tiberiana (q.v.). For the same reason the floor level was raised about 0.70 metre. In this period, too, Hadrian’s additions were linked up with the rest of the house, and a second and third story were added over them. Finally, after suffering injury in the fire of Commodus, the atrium was restored by Julia Domna, and the courtyard lengthened to 69 metres (it was, as before, 24 metres wide) so as to occupy the whole of the central area. It was then that the arches spanning the Nova via were built, serving as a support both to the upper stories of the atrium and to the structures on the lower slopes of the Palatine (Ill. 8). After this date various minor alterations were made, including the construction, in the Constantinian period, of an octagonal structure enclosing a circle in the centre of the peristyle (perhaps the foundation of a pavilion, or the edging of a garden bed) and of two small piscinae, one at each end, to replace the large one, which was no longer in symmetry with the plan (Ill. 6).

After the last restoration the central court was surrounded by a double colonnade, replaced at a still later period by a brick wall pierced by arches. Round the court stood numerous statues of Virgines Vestales Maximae on inscribed pedestals (AJA 1908, 324‑342; CIL VI.32409‑32428; HF II.1243, 1357‑1361; PT pp76‑78, Nos. 39, 42). At the east end was a large hall paved with fine marbles, with three rooms on each side of it; on the south of it is a small hall, with a sort of vaulted cellar (possibly the penus of the household) and to the north is a room in which an archaic altar, belonging to the Republican house, has been found. On the south side of the courtyard is a group of rooms used for household purposes, after which comes a series of finely decorated rooms. At the west end are some rooms which are cut off from the courtyard, and may, it is thought, have served for the cult of the Lares (cf. Lares, aedes); and further west still are rooms probably used for the cult of Vesta in connection with the temple. Two hoards of coins were found in the house — 830 Saxon coins, dating down to the middle of the tenth century, in 1883 (NS 1883, 487‑514), and 397 gold coins dating from 335 to 467‑472 A.D. in 1899 (ib. 1899, 327‑330).

A statue of Numa with a head of an ideal Greek type of the fifth century B.C., with a space for a bronze beard, was found in the house of the Vestals. As the body shows, it probably belongs to the period of Trajan (BC 1919, 211‑224). The head shows evidence of the rite of resectio (see Lucus Furrinae).

Where in Rome is the Atrium Vestae?

Created by The American Institute of Roman Culture, published on 07/31/2020 under the following license: Creative Commons: Attribution-NonCommercial-ShareAlike. This license lets others remix, tweak, and build upon this content non-commercially, as long as they credit the author and license their new creations under the identical terms. Please note that content linked from this page may have different licensing terms.