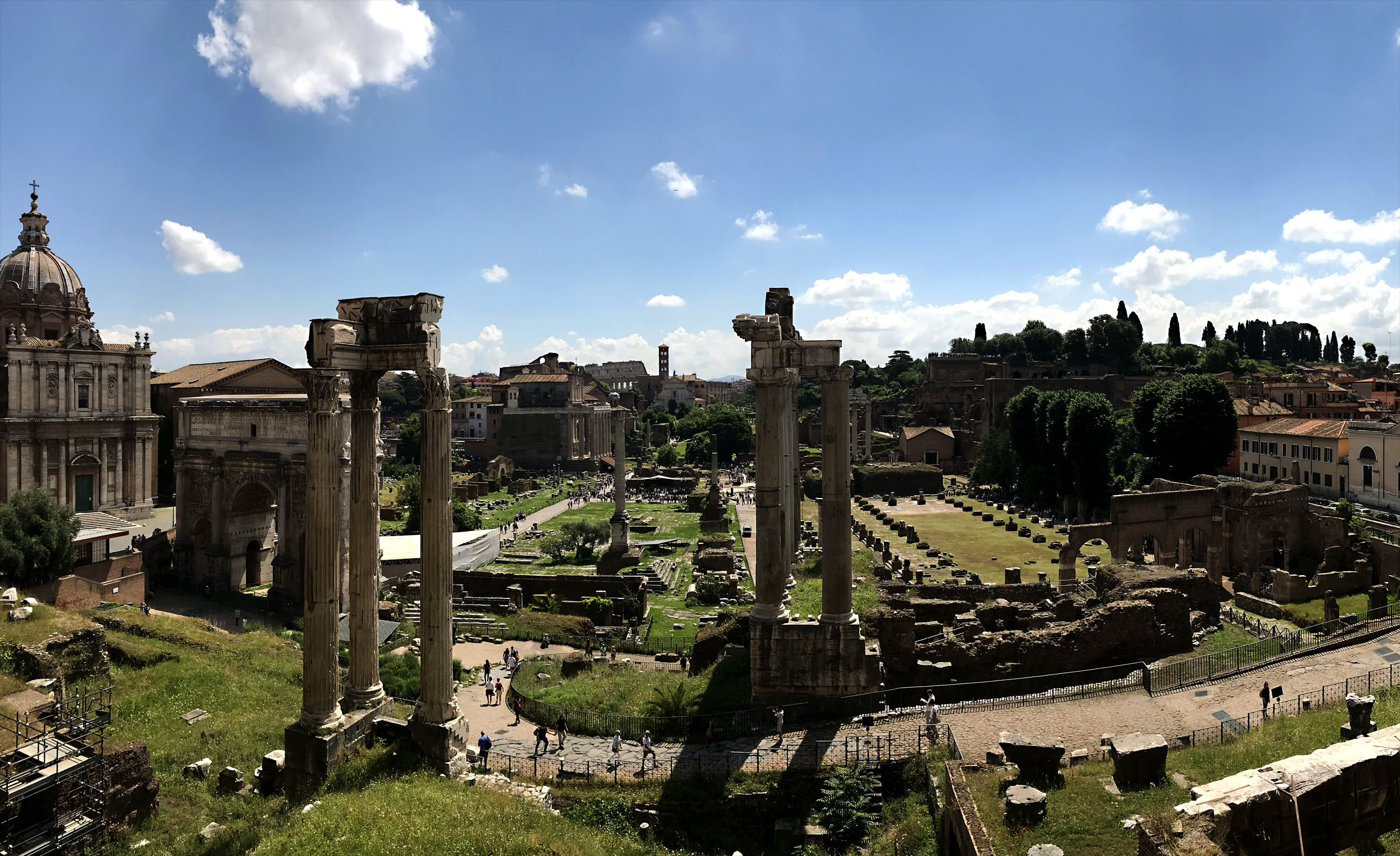 Written by: Sophia Papaioannou, The National and Kapodistrian University of Athens

The study the way Romans record their memory of the city for others to see through descriptions of civic space rendered in literary writing is an elusive task, for literary landscapes are compositions filtered through complex rules. The rise in memory studies in recent decades and the trend among modern literary artists to direct the viewers’ understanding of the work through the artist’s visual or written documentation of a walking tour, has introduced new parameters through which to interpret famous descriptions of the Roman landscape. The visual memory of Rome in the earliest surviving poetic transcript of journeys through the city, recorded in the speech of the Choragus in Plautus’ Curculio, and the most celebrated tour of proto-Rome, set in Vergil’s Aeneid 8, are two outstanding such literary journeys. Both these recordings of sojourning across the Roman landscape are multi-layered compositions that work as commentaries on contemporary cultural and political trends.

At Plautus, Curc. 462, the Choragus, an extradramatic character who provides the accessories (costumes, etc.) for the comic performance, takes the stage. Seemingly in search of the parasite Curculio, he soon turns to the audience and offers to guide them through the Roman Forum (Curc. 466-486)—even though the play is set in Epidaurus.

In the interim and until he comes back, I’ll show in which place you can easily find which sort of person, so that no one strives too laboriously if he wants to meet someone, be it a man of vice or a man without vice, be it worthy or a worthless character. Anyone who wants to meet a perjurer should go to the assembly place. Anyone who wants to meet a liar and a braggart must look for him at the temple of Venus Cloacina, and anyone who wants to meet rich and married wasters must look below the colonnaded hall. In the same place there will also be grown-up prostitutes and men who ask for formal guarantees from prospective debtors. Those who contribute to shared meals are on the fish market. At the lower end of the market decent and wealthy people stroll around; in the middle part of the market next to the open drain are the mere showoffs. Arrogant, garrulous and malevolent people are above the Lake, ones who boldly insult their neighbor for no good reason and who have enough that could in all truth be said about themselves. Below the Old Shops there are those who give and receive on interest. Behind the temple of Castor there are those whom you shouldn’t trust quickly. In the Tuscan Quarter there are the people who sell themselves. In the Velabrum you can meet the miller or the butcher or the soothsayer or those who turn or give others the opportunity to turn. [Rich and married wasters at the house of Leucadia Oppia]. [Trans. De Melo (2011), Loeb, with minor changes]

The Choragus identifies eleven individual locations in the Forum, though not all of them are in use or identified with precision in Plautus’ day:

The Choragus offers simultaneously a topographical overview of the Forum and an overview of the palliata. In light of this knowledge of the Roman cognitive understanding of geographical space, I would like to suggest that Plautus’ Roman Forum is not as accurately described as it is generally believed, and that this inaccuracy is deliberate, because it is a tongue-in-cheek commentary on the impending transformation of the Roman civic landscape, which in a few decades will redefine the greater area of the Forum from an area of private and commercial activity to one of public, political significance.

The Choragus’ arrangement of architectural monuments and physical locations in association with individuals of distinct social/professional classes, portrays the Roman Forum as a proto-memory palace—only in this synthesis monumental architecture does not necessarily work as the memory house: the imagines help identify and memorize the loci inasmuch as the loci direct to the correct imagines, and their interaction reflects the fluidity of the Roman civic landscape at the turn of the 3rd c. BCE—a landscape under construction.

In the year 210 BCE a great fire broke out on the north side of the Roman Forum, where a series of shops (tabernae), including the bankers’ shops, the tabernae argentariae, were located. Livy offers a detailed description of the catastrophe (AUC 26.27.1-4):

a fire […] broke out in several places at once about the Forum. At the same time the seven shops (tabernae) which later were five, and the bankers’ offices (tabernae argentariae), now called Tabernae Novae, caught fire; then private houses (privata aedificia) took fire—for there were no basilicas then—the quarries [lautumiae; a stone-quarry district on the east slope of the Capitoline], and the Fish Market [forum piscatorium; located behind the tabernae and north of the Forum] and the Atrium Regium. The Temple of Vesta was saved with difficulty chiefly by the aid of thirteen slaves, who were purchased by the state and manumitted.

The destruction offers the opportunity for rebuilding, and rebuilding rewrites and reinterprets space. Several of the locations identified in the Choragus’ tour were affected and underwent reconstruction in the years immediately following the catastrophic fire of 210. By the time the Curculio is composed, the architecture of the Forum is radically redrawn and renovated. The Choragus employs mnemotechnics in order to prompt his audience capture in their memories the current image of the lower forum, a shapeless space that is ever evolving in the comic imagination—an image soon to disappear in light of the sweeping architectural changes that will transform it in the following decades into a well-defined, fixed and controlled square.

In Book 8 of the Aeneid, Vergil’s audience receive their first tour of the early site of Rome through the eyes of Aeneas and his host and leader of the tour, King Evander, the legendary founder of the area. In the course of this travelogue Aeneas receives information about a set of monuments with cardinal significance for the essence of historical Rome and Vergil crosses paths with Roman historiographical and annalistic tradition that had formulated and controlled the broadly embraced memory of the Roman past.

A legendary figure well established in the Italian tradition prior to Vergil as the founder of early Rome, Evander introduces Aeneas to the space and the institutions surrounding the site that will become the capital of the Roman nation. Aeneas’ visit at Pallanteum, according to Vergil’s narrative, spreads over two days. On the day of his arrival he witnesses the anniversary celebration of a festival in honor of Hercules’ passage through Latium that helped establish peace and civilization in Latium—a passage that triggered Roman cultural memory and left its indelible marks on the Roman topography. The following day, Aeneas under the guidance of Evander undertakes a tour of the entire area of Pallanteum and familiarizes himself with a location that will host the core of the Roman capital in the generations to come. Several of these sites and monuments Aeneas passes by and familiarizes himself with their history, were actually built much later. The anachronisms is not the only innovation in Vergil’s account of the early days of Rome. Vergil’s description corresponds to topographic reality, and it presents the era of early Rome as an actual, orderly historical narrative.

Markedly, the narrative in Aeneid 8 is composed of small, independent, fully detailed, and chronologically well-placed units it is what one may define as historical. Proto-Rome is a historical land-mark; it has a past that can be actually traced, and a future that will be fulfilled. The site on the Palatine has already been settled by Evander (V. Aen. 98) and flourishes under his wise rule. As soon as Aeneas arrives, he witnesses an annual sacrificial ceremony. Immediately afterwards he is told the story of Hercules and Cacus, and, then, the history of the people and the area at an earlier time in Evander’s life and rule. Aeneas and his companions can check the veracity of the story: the ruins of the cave of Cacus, the monster that Hercules killed, are in sight for all to see. Soon after the performance of the rituals and the ceremonial banquet, Aeneas joins Evander in a walk back to the city. During this walk, Evander tells the Trojan guest of Saturn’s arrival, an event signaling for the aged Arcadian the actual beginning of the history of Latium: the area became a shelter for the exiled god to hide (latere), and this offer of hospitality became an inherent trait, mirrored on its name (Latium). Evander points out the Capitoline hill as he talks about Saturn’s settlement (357, hanc Saturnus condidit arcem). Aeneas thus sees with his own eyes the remains of this early community (310-1, miratur facilisque oculos fert omnia circum I Aeneas, capiturque locis), the first community in the history of Italy organized under laws (321-2). The human intervention on the landscape phase of proto-Roman history Evander/Vergil summarily passes over with the phrase ‘monuments of the early people’ (virum monumenta priorum, 312), before he guides Aeneas’ tour through a set of significant sites that he chooses to identify: the Carmental gate and shrine (337-8), the ruins of Janus’ town on the Janiculum (355-7), the Argiletum (346), the grove where the Arcadians saw Jupiter (351-2), and above all the community of Pallanteum itself (359-61). Aeneas has to be made aware of the fact that the area destined to become Rome is already a city with history, which he will soon be invited to honor and enrich. To this end Vergil embellishes the hero’s tour with several famous landmarks that came into existence during later times, but would have been familiar to Romans of his day. Aeneas sees the Asylum grove on the Capitoline (342), the Lupercal, presumably the location where the she-wolf suckled Romulus and Remus (343), and which had been restored in Vergil’s time by Augustus (cf. Res Gestae 19), the Tarpeian rock (347), the Forum and the Carinae (361). Pallanteum, in short, is not an imaginary escapist landscape, but a site along the bank of the Tiber precisely described, with a past and a future. The natural description of the area, especially the abundant green vegetation (83, viridique in litore; 96, viridisque silvas; 104 and 125, luco) and the water element in abundance (74, lacus; 75, fonte) bespeaks at once the frugality and the latent virility of the people to inhabit and tend to the place—a virility that feeds on and draws guidance from labor, the signature quality of the proto-Roman community, which together with discipline, was introduced by Saturn and, on account thereof, the community of Pallanteum enjoys an existence comparable to that during the aurea saecula (324-5).

Renaud, C. 1990. Studies in the Eighth Book of the Aeneid; The Importance of Place (Unpublished Dissertation, The University of Texas at Austin)

Russell, A. 2015. The Politics of Public Space in Republican Rome. Oxford: OUP.

Where in Rome are the monuments to Roman cultural memory ?

Created by The American Institute of Roman Culture, published on 11/06/2020 under the following license: Creative Commons: Attribution-NonCommercial-ShareAlike. This license lets others remix, tweak, and build upon this content non-commercially, as long as they credit the author and license their new creations under the identical terms. Please note that content linked from this page may have different licensing terms.