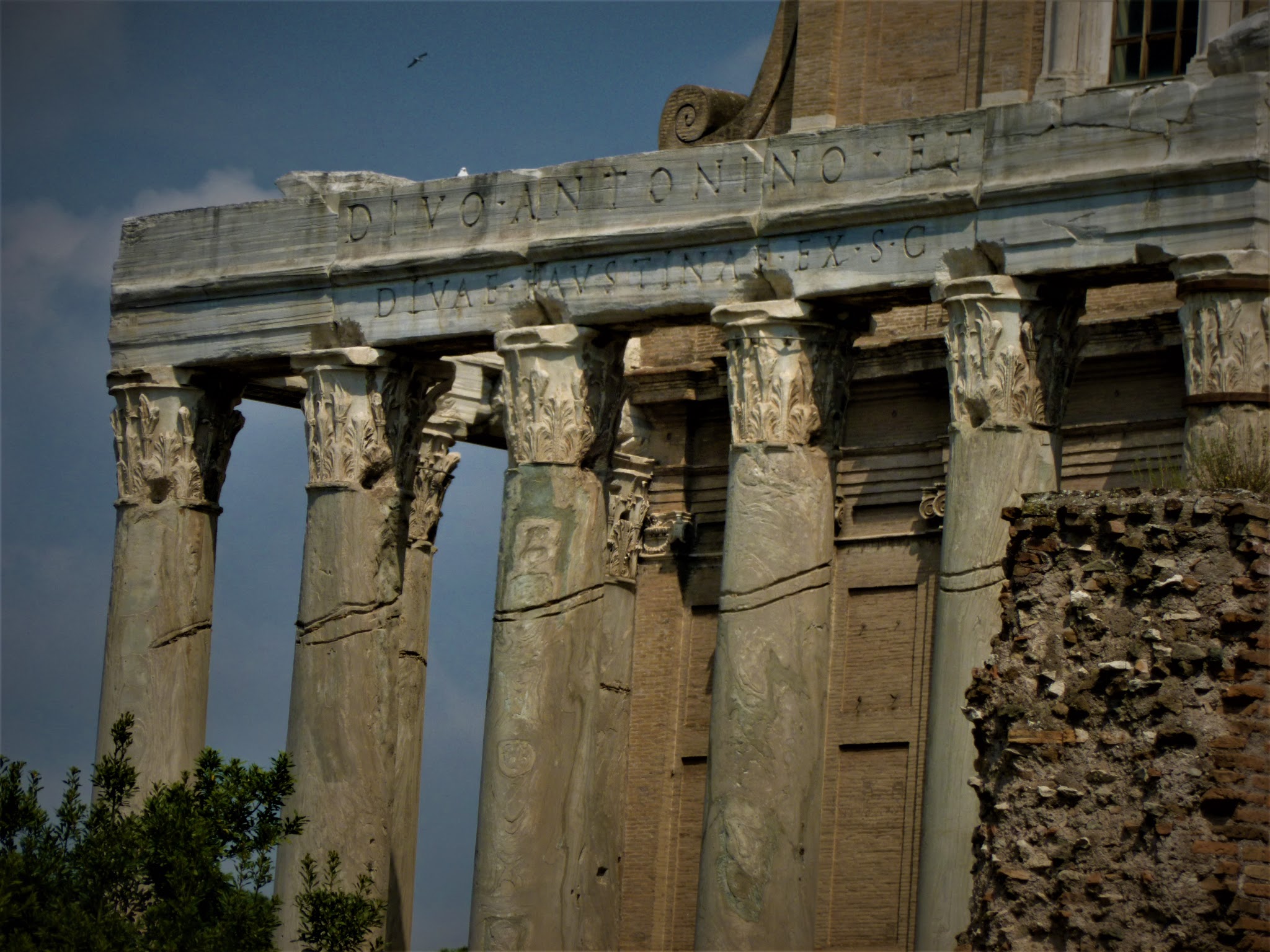 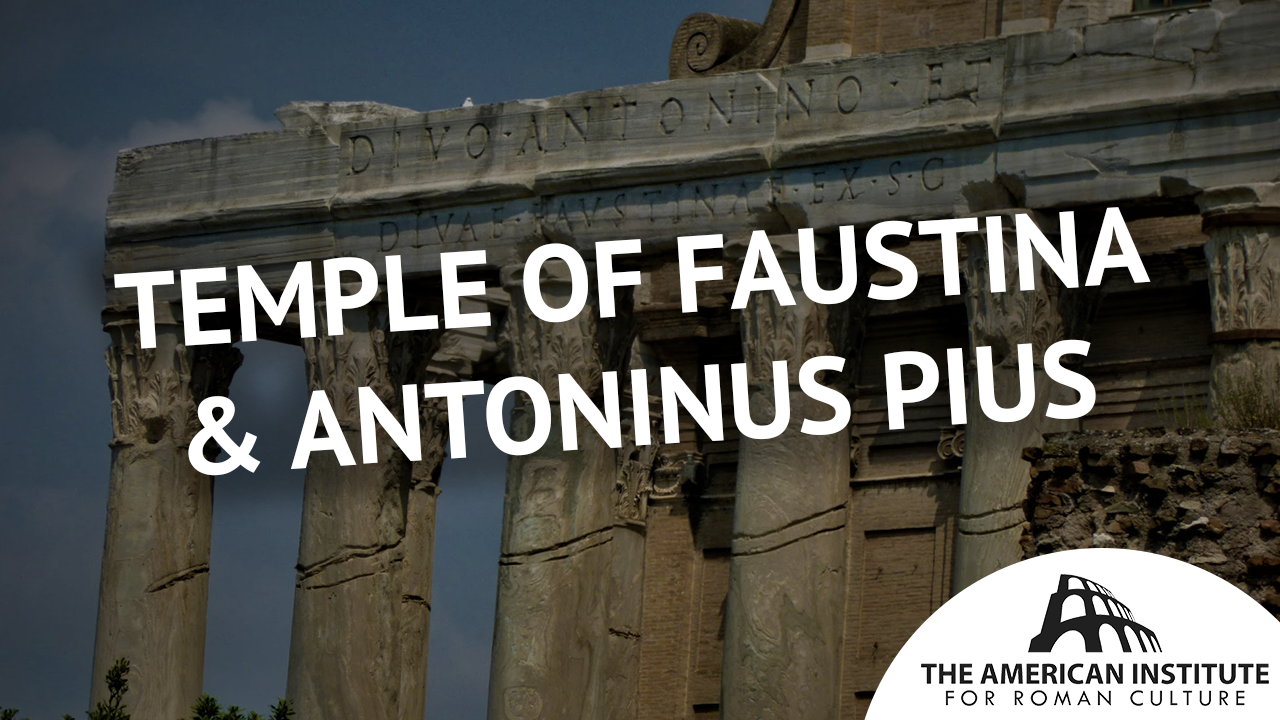 Located in the Roman Forum, this is one of the best preserved temples in Rome. The temple was dedicated to Faustina and then Antoninus Pius. It is so well preserved because the temple was converted into the Church of St. Lawrence of the Miracle in the seventh century. 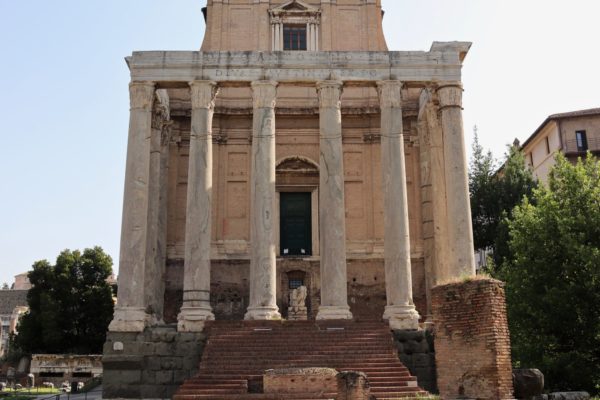 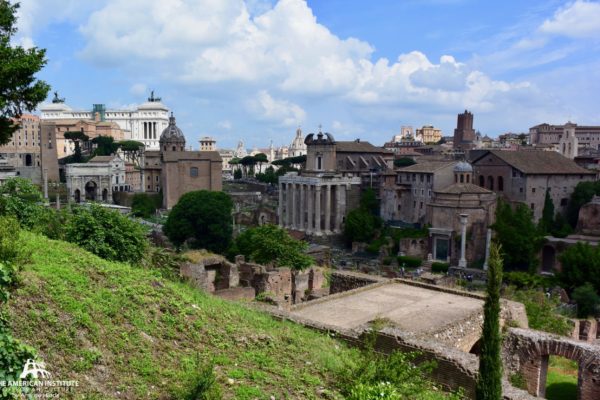 Antoninus et Faustina, templum:   the temple built by Antoninus Pius on the north side of the Sacra Via  at the entrance to the forum, just east of the Basilica Aemilia, in honour of his deified wife, the empress Faustina, who died in 141 A.D. (Hist.Aug. Pius 6).  After the death of Antoninus himself in 161, the temple was dedicated to both together (His. Aug. Pius 13). The inscription on the architrave records the first dedication, and that added afterwards on the frieze records the second (CIL VI.1005: divo Antonino et divae Faustinae ex s.c.). In consequence of this double dedication the proper name of the temple was templum d. Antonini et d. Faustinae (so a fragment of the Fasti of 213‑236 A.D., CIL VI.2001), but it was also called templum Faustinae  p14 (Hist. Aug. Salon. 1; Not. Reg. IV) and templum d. Pii.  It is represented on coins of Faustina (Cohen2, Faustina senior, Nos. 1, 64‑71, 191‑194, 253‑255, 274).

In the seventh or eighth century this temple, apparently in good condition, was converted into the church of S. Lorenzo in Miranda,  the floor of which is about 12 metres above the ancient level. Excavations in front of the temple were undertaken in 1546 (LS II.193‑196; JRS 1919, 183), 1810, 1876, 1885 (HJ 9), and in 1899 and following years (CR 1899, 186; 1902, 285; BC 1900, 62‑63; 1902, 30‑31; NS 1899, 77), when the whole eastern side was exposed to view. It was hexastyle prostyle, with two columns on each side, besides those at the corners, and pilasters in antis. The columns are of cipollino, 17 metres high and 1.45 in diameter at the base, with Corinthian capitals of white marble, and support an entablature of white marble which probably encircled the whole building. The existing remains consist of portions of the cella wall of peperino, built into the walls of the church, extending for 20 metres on the north-west and 15 on the south-west side; the columns of the pronaos, which stand free from the church with the exception of the two nearest the antae; the architrave and frieze of the façade and sides as far as the cella wall extends, but only a small part of the cornice; and the wide flight of steps leading down to the Sacra via, in the middle of which are the remains of an altar. Some fragments of a colossal male and female statue, and a few other pieces of sculpture, have been found. The whole temple was covered with slabs of marble, which have disappeared. The frieze on the sides of the temple was beautifully sculptured in relief with garlands, sacrificial instruments and griffins, and on the columns are numerous inscriptions and figures, some of which are Christian and have been scratched as early as the fourth century A.D. (HJ 8‑9, and literature cited;  Thédenat, 160, 273‑274; D’Espouy, Monuments, ii.96‑98; Fragments, i.92; ii.91, and especially Bartoli in Mon. L. xxiii.947‑974; DAP xv.368; RE Suppl. IV.485‑7; SScR 247; HFP 36).

Where in Rome is the Temple of Faustina and Antoninus Pius?