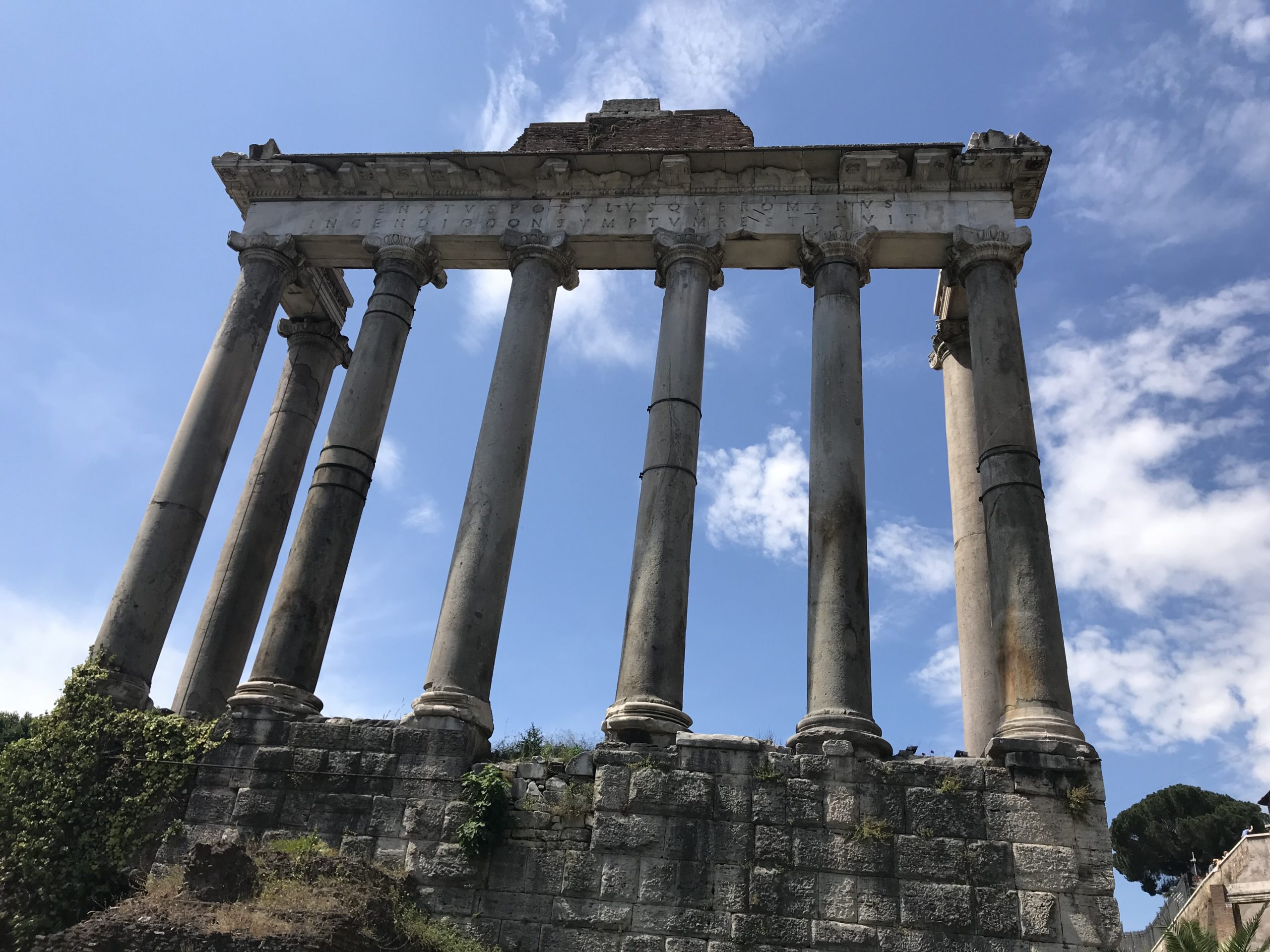 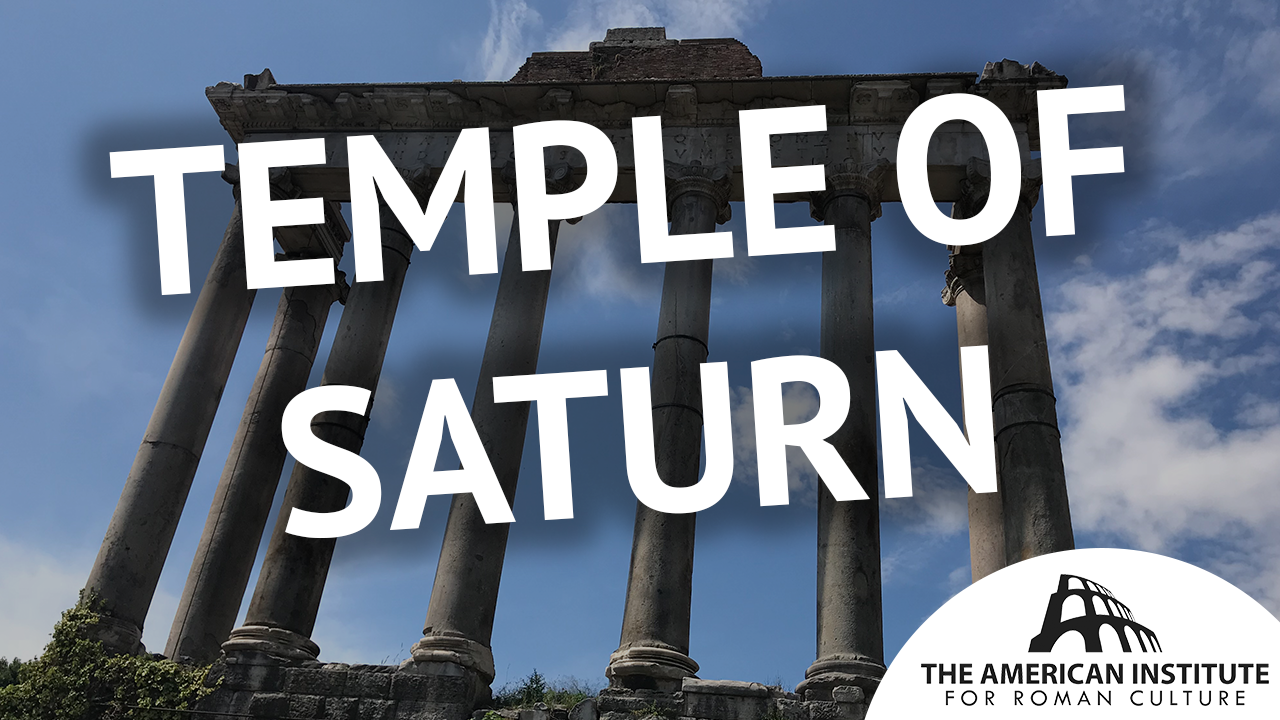 The Temple of Saturn is located on the southeastern slope of the Capitoline Hill, between the Clivus Capitolinus and Vicus Iugarius.  It faced northeast, toward the carcer (prison) and (eventually) across from the Arch of Septimius Severus.  It is a quintessential Republican-era temple, grand in scale for the period of its inception, in the fifth century BC (circa 501-493 BC).

The temple was dedicated to Saturn, an agricultural divinity eventually paired with the Greek god, Kronus. The festivity of the Saturnalia to honor Saturn took place from December 17-23 (originally of a shorter duration, but extended to seven days by the imperial period). This end of year festivity was a period of revelry, gift exchange, and gambling. The public festival took place at the temple on December 17th. The remaining events focused on events at the home.

The temple was also held the treasury (aerarium) and was used as the office of the fiscal officers, the quaestors (Plutarch, Ti. Gracchus 10.6).

The temple was rebuilt by L. Munatius Plancus in the Augustan age (Suetonius, Aug. 29.5) and finally in the late fourth century, possibly instigated by the reign of Julian, who attempted to resuscitate the traditional gods and their rites. The inscription records that the Senate financed its reconstruction, after its destruction from a fire (CIL 6.937).  The temple uses material from other temples, if not Plancus’ structure, but the capitals are impressive examples of Late Antique artistry. 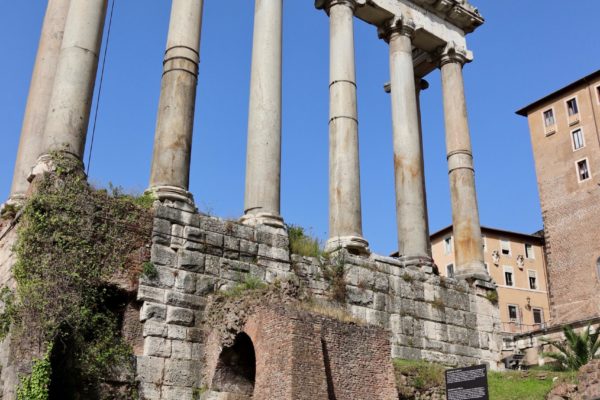 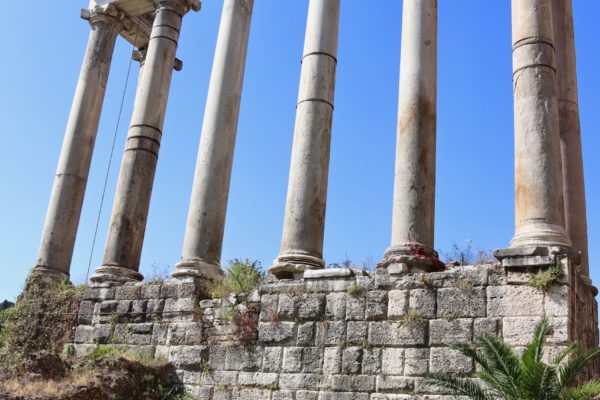 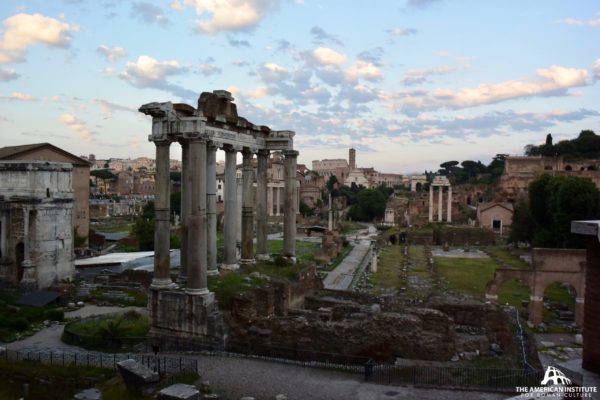 Listen now to Darius Arya’s podcast about the Temple of Saturn:

SATURNUS, AEDES, (fanum also in Varro and Macrobius, templum also in Macrobius and Not.): the temple erected close to the original ara at the foot of the Capitoline and edge of the forum (Varro v. 42: in faucibus (Capitolii); Liv. xli. 21. 12: in foro Romano; Macrob. i. 8. 1: ad Forum; Fest. 322: in imo clivo Capitolino; Serv. Aen. viii. 319, Auct. Orig. 3. 6: sub clivo Capitolino; Serv. Aen. ii. 116, Hygin. Fab. 261: ante clivum Capitolinum; Dionys. i. 34.4; vi. I. 4). It was the oldest temple of which the erection was recorded in the pontifical archives, but there was marked disagreement as to the exact date. One tradition ascribed its dedication to Tullus Hostilius; according to another it was begun by the last Tarquin (Varro ap. Macrob. i. 8. I; Dionys. vi. i. 4). Elsewhere, however, its actual dedication is assigned to the magistrates of the first years of the republic, either to Titus Larcius in his dictatorship in 50o (Macrob. loc. cit.), who also is said to have commenced building the temple in his second consulship in 498 (Dionys. vi. I. 4); or to Aulus Sempronius and M. Mamercus, the consuls of 497 (Liv. ii. 21. ; Dionys. loc. cit); or to Postumus Cominius, consul in 501 and 493, by vote of the senate (Dionys. loc. cit.). A different tradition seems to be preserved by Gellius (ap. Macrob. i. 8. I: nec me fugit Gellium scribere senatum decresse ut aedes Saturni fieret eique rei L. Furium tribunum militum praefuisse). Which Furius is referred to is not known (RE vii. 316, 354-356; Peter, Hist. Rom. Reliq. is. 155), and this form of the tradition is probably valueless.1 The dedication of the temple may safely be assigned to the beginning of the republic.

Throughout the republic this temple contained the state treasury, the aerarium populi Romani or Saturni, in charge of the quaestors (Fest. 2; Solin. i. 12; Macrob. i. 8. 3; Plut. Tib. Gracchus 10; App. BC i. 31; RE i. 667, 671), and in it was a pair of scales to signify this function (Varro, LL v. 183). Under the empire the same arrangement continued, but the aerarium Saturni now contained only that part of the public funds that was under the direction of the senate as distinguished from the fiscus of the emperors, and was administered by praefecti generally instead of quaestors (Plin. Ep. x. 3. 1; for the inscriptions relating to the aerarium, see DE i. 300; and for occurrences of aerarium populi romani or Saturni, Thes. ling. Lat. i. 1055-1058). It is probable that only the money itself was kept in the temple, and that the offices of the treasury adjoined it, perhaps at the rear in the AREA SATURNI (q.v.), until the building of the Tabularium in 78 B.C., when some at least of the records were probably transferred thither. Other public documents were affixed to the outer walls of the temple and adjacent columns (Cass. Dio xlv. 17. 3; CIL ia. 587, col. 2, 1. 40; Varro, LL v. 42).

On the gable of the temple were statues of Tritons with horses (Macrob. i. 8. 4), and in the cella was a statue of Saturn, filled with oil and bound in wool (Plin. NH xv. 32; Macrob. i. 8. 5; Rosch. iv. 431), which was carried in triumphal processions (Dionys. vii. 72. 13). The day of dedication was the Saturnalia, 17th December (Fast. Amit. ad xvi Kal. Ian., CIL is. p. 245, 337; Liv. xxii. I. 19). There are a few blocks of the podium of the original temple still remaining, and a drain below and in front is probably as early, in which case it and some similar drains close by are the earliest examples of the stone arch in Italy (TF 51-54 attributes the drain to the fourth century B.C., but his suggestion as to its object is unacceptable). There is no trace of any construction of an intermediate period, and the existing podium belongs to the temple of Plancus. It is constructed of walls of travertine and peperino, with concrete filling, and was covered with marble facing. It is 22.50 metres wide, about 40 long, and its front and east side rise very high above the forum because of the slope of the Capitoline hill. The temple was Ionic, hexastyle prostyle, with two columns on each side, not counting those at the angles. Of the superstructure eight columns of the pronaos remain, six in front and one on each side, together with the entablature, hitherto attributed to the period of the final restoration. It seems more likely that Fiechter (Toeb. i. 5 sqq.) is right in attributing the cornice to the Augustan period, on the analogy of several other cornices (T. Divi Iuli, Magnae Matris, Regia, etc.). The architrave blocks with the palmette frieze belowthem belong to the forum of Trajan, whence theywere removed for the fourth century restoration (ibid. 62-66). The front columns are of grey and those on the sides of red granite, while the entablature is of white marble. The columns are 11 metres in height and 1.43 in diameter at the base; but in some of them the drums that form the shaft have been wrongly placed, so that the shaft does not taper regularly toward the top. The bases also are of three different kinds-Attic, and Corinthian with and without a plinth.

Where in Rome is the Temple of Saturn?

The Architecture of Roman Temples: The Republic to the Middle Empire First Edition Edition 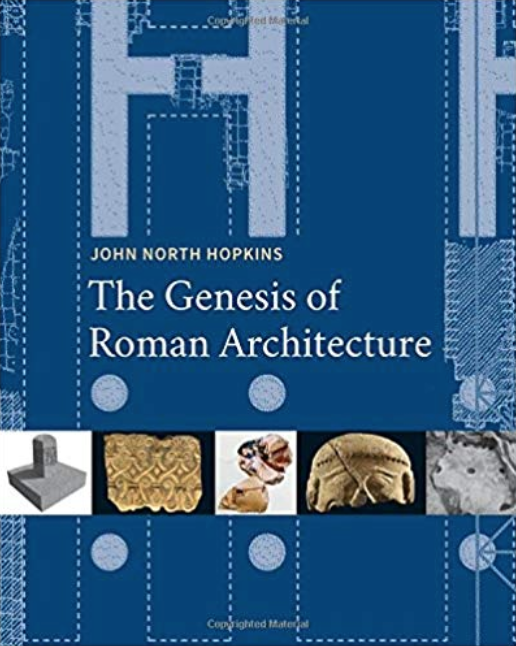 The Genesis of Roman Architecture Hardcover

Created by The American Institute of Roman Culture, published on 13/12/2019 under the following license: Creative Commons: Attribution-NonCommercial-ShareAlike. This license lets others remix, tweak, and build upon this content non-commercially, as long as they credit the author and license their new creations under the identical terms. Please note that content linked from this page may have different licensing terms.