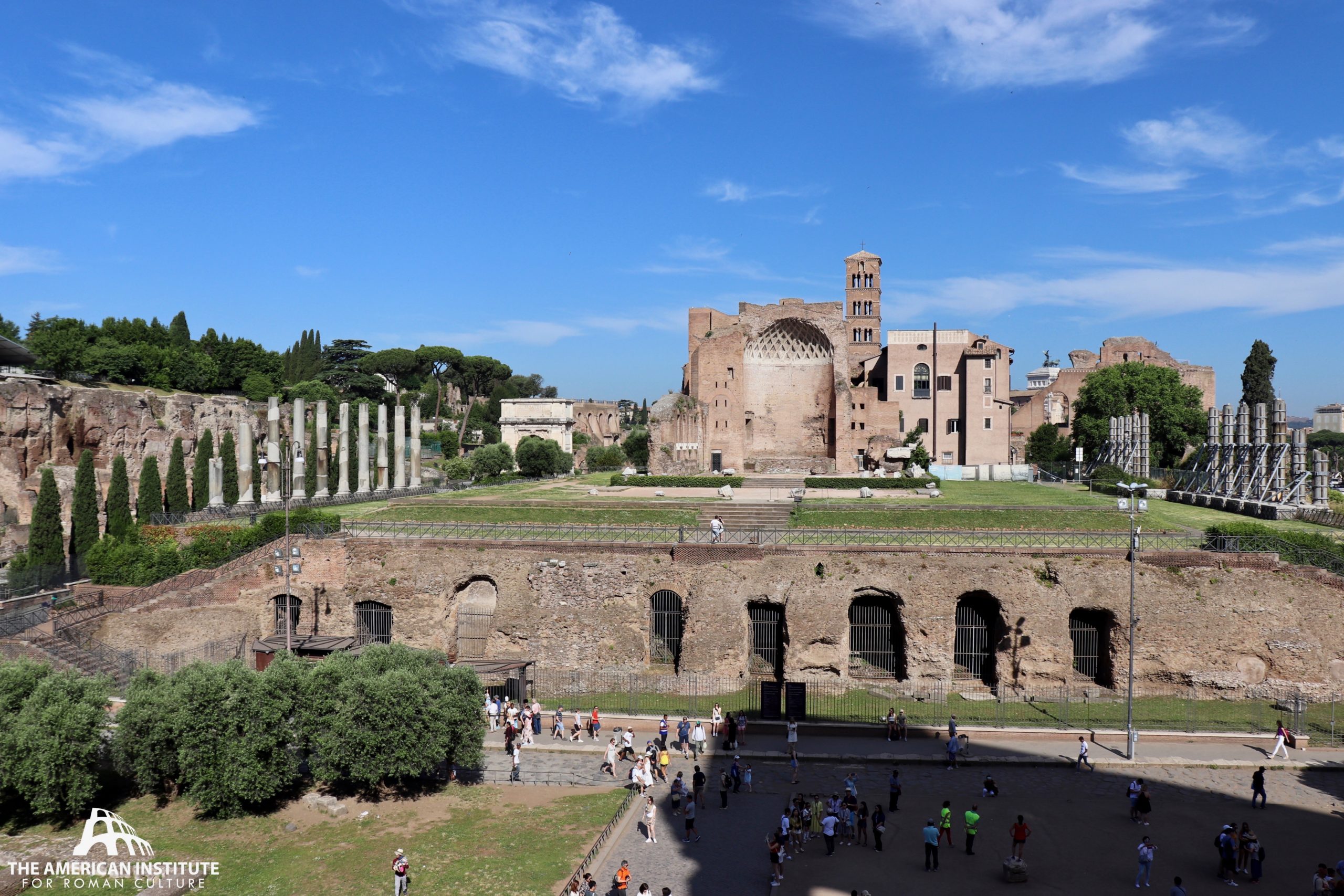 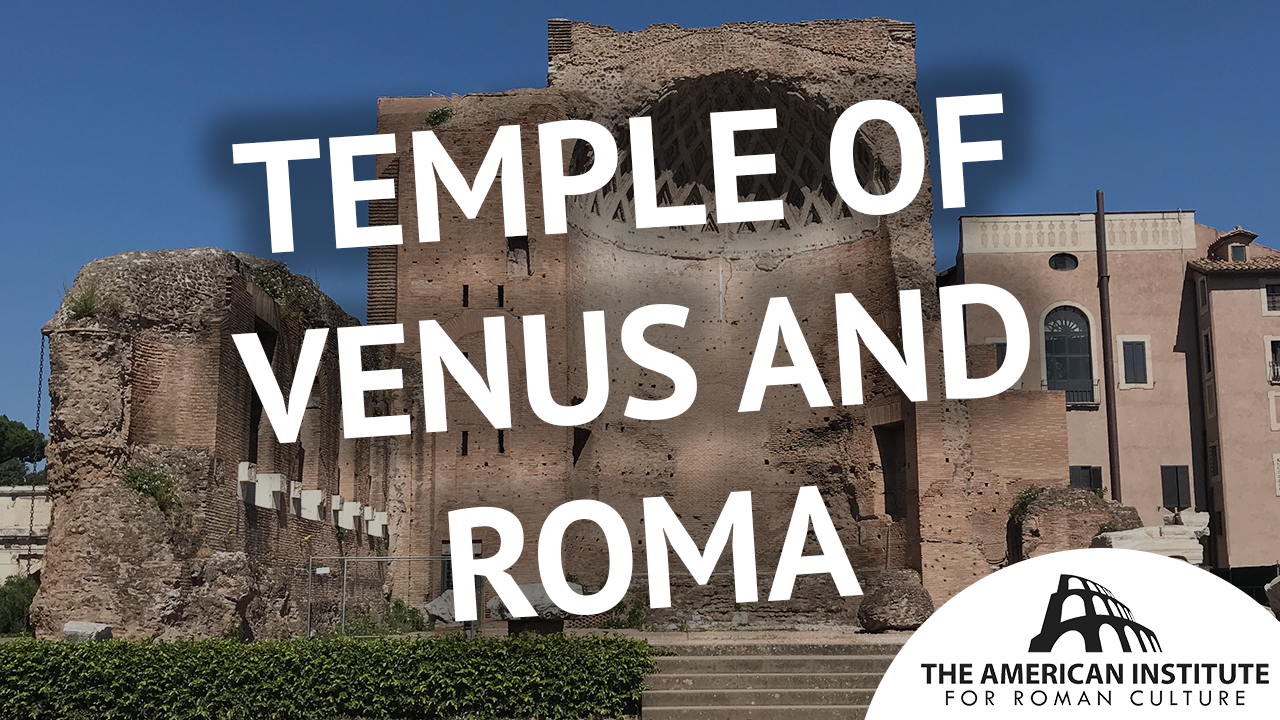 The Temple of Venus and Rome was one of Rome’s most colossal temples.  Constructed by Hadrian, and dedicated in 135 (though possibly not completed until 145 by Antoninus Pius, according to numismatic evidence depicting the temple), it essentially enveloped the Velia hill, a small contiguous mound adjoining the Palatine hill.

The construction covered over the remains of the extensive portico entrance to Nero’s Golden House and necessitated the relocation of Nero’s colossal statue from the top of the Velia hill down to its location next to the Colosseum.  Excavations in the 1930s also revealed a series of other structures enveloped by the temple construction: private residences with cryptoporticoes and cisterns, underlying the original residential nature of the Velia.

The structure today is a magnificent ruin, largely a reconstruction under Maxentius after the fire that also severely damaged the Roman Forum in 283, or 307 (Chron. 148; Aur. Vict., Caes. 40.26).  In response, Maxentius also rebuilt the vestibule on the Via Sacra that connected to the Forum of Peace and constructed the massive brick-faced basilica, completed by Constantine.  Maxentius’ main contribution to Hadrian’s temple was to reconstruct the original wooden roof of the temple, destroyed by the fire, in concrete vaults, and he added back-to-back curved apses for the two cella spaces, lining them with porphyry columns (today, partially reconstructed).
The temple’s dimensions were enormous.  107 meters by 48 meters, with ten columns across the front (decastyle), and twenty-two along the sides.  The columns were truly enormous, 60 foot shafts. The roof height was over 30 meters. The actual precinct around the temple measured 145 by 100 meters.  It was flanked by smaller side porticoes with granite columns, many which have been re-erected, and in more recent times, shored up with scaffolding to protect them from possible damage from the ongoing work on Metro C along the Via dei Fori Imperiali.

The temple had two, back-to-back cellae to accommodate the two goddesses.  The Forum (west) side was dedicated to Roma Aeterna, the personification of the goddess created by the conquered Greek cities in the Republican period, though rarely worshipped officially in Rome until Hadrian. The Colosseum (East) side housed a statue of Venus Felix.

The temple stood largely intact until the seventh century, when emperor Heraclius allowed Pope Honorius I to remove the bronze roof tiles for adorning S. Peter’s basilica. Then, with the destruction of Santa Maria Antiqua in the Forum in 847, San Maria Nova was constructed on the western end of the podium, later joined by a monastery, of S. Francesca Romana.  By the 11-12C it was incorporated into local fortifications adjoining the Palatine hill.  From the 14C- 16C it was cited as a quarry site, frequently pillaged for marble and travertine.

The site took its current form only in the 1930s, with the construction of the Via dei Fori Imperiali.  In more recent years, the podium has become accessible to the public daily, as part of the regular entrance to the Forum-Palatine archaeological park, giving the visitor an exception view of the Colosseum and a fantastic opportunity to explore one of Rome’s largest temples. 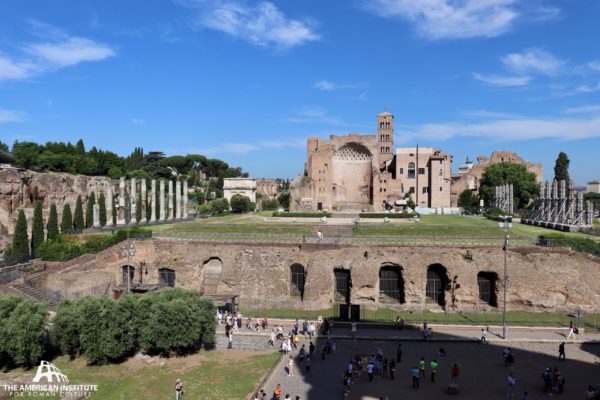 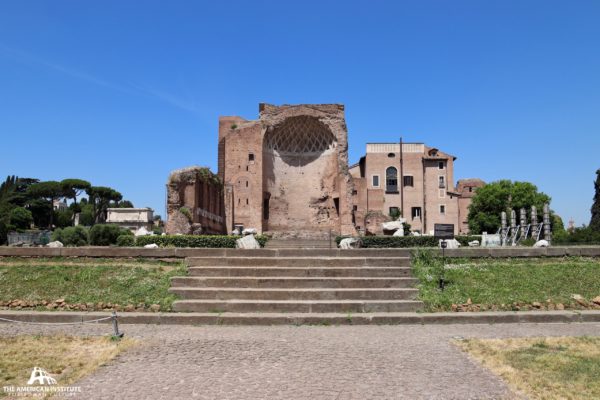 In accordance with Roman theory in such matters, it was necessary to build a separate cella for each goddess, in this case not side by side, but back to back, that of Venus facing east, and that of Roma west (Prud. loc. cit.: atque Urbis Venerisque pari se culmine tollunt templa). In 307 the temple was injured by fire and restored by Maxentius (Chron. 148; Aur. Vict. Caes. 40: urbis fanum) ; and the whole of the superstructure dates from his time, as was first pointed out by Nibby (Roma Antica ii. 738; 2 cf. AJA 1912, 429). It was one of the monuments that aroused the special wonder of Constantius when he visited Rome in 356 (Amm. Marcell. xvi. 10. 14), and was probably the largest and most magnificent temple in the city. It is mentioned in the Notitia (Reg. IV), and somewhat later by Prudentius (loc. cit.), for the last time in antiquity. The history of its destruction is unknown, but in 847-853 Leo IV built the church of S. Maria Nova in its ruins (HCh 352), and this is one of the chief arguments that it was the earthquake of his reign that wrought so much harm in and around the forum (LPD ii. 108, c. 20: terre motus in urbe Roma perindictionem factus est x (i.e. before 30th August, 847) ita ut omnia elementaconcussa viderentur ab omnibus). This church was rebuilt in 1612 and is now called S. Francesca Romana. (Cf. p. 235).

The temple proper was built on an enormous podium of concrete faced with travertine, 145 metres long and 100 wide, on the north side of the Sacra via, between the Velia and the Colosseum, and on the line of the main axis of the latter, necessitating the removal of the COLOSSUS NERONIS (q.v.). Owing to the slope of the ground, the height of the podium at the east end is considerable, and chambers were constructed in it for the storage of the machinery and apparatus of the amphitheatre. On this podium was a peribolus formed of a colonnade consisting of an outer wall and a single row of enormous columns of grey Egyptian granite on the sides, and probably of a double row of columns only at the ends. This colonnade had projections like propylaea at the corners and at the middle of the long sides. See JRS 1919, 184, for Ligorio’s plan of it (the genuineness of which is doubtful). At the west end of the podium a wide flight of steps led down to the paved area in front of the temple; but at the east end there were only two small flights. The temple proper was raised on a platform, seven steps high, in the centre of the peribolus. The two cellar ended in apses placed back to back; but a: the side walls of the cellae were prolonged so as to meet, the external appearance was that of one long rectangular building.

This temple was decastyle, of the Corinthian order, and pseudo- dipteral (Cohen, Hadr. 1420-3,3 Pius 698-703, 1074-6; BC 1903, 19), the columns of the peristyle being of white marble about 1.8 metres in diameter. The cellae were narrower than the facade, and each pronaos had only four columns between the antae. The building was constructed of brick-faced concrete, and entirely covered with marble. Within the cellae, on each side, were rows of porphyry columns supporting an entablature. In the apses were five niches, alternately square and semicircular, with columns and entablatures in front of them. In the central niche of each apse was the statue of the goddess herself-Venus, in one and Roma in the other. Within the precincts of the temple were silver statues of Marcus Aurelius and Faustina, and an altar on which sacrifice was made by newly married couples (Cass. Dio lxxi. 31), a statue of Minerva (Serv. Aen. ii. 227), and doubtless many more (Hist. Aug. trig. tyr. 32).

Where in Rome is the Temple of Venus and Roma?

The Architecture of Roman Temples: The Republic to the Middle Empire 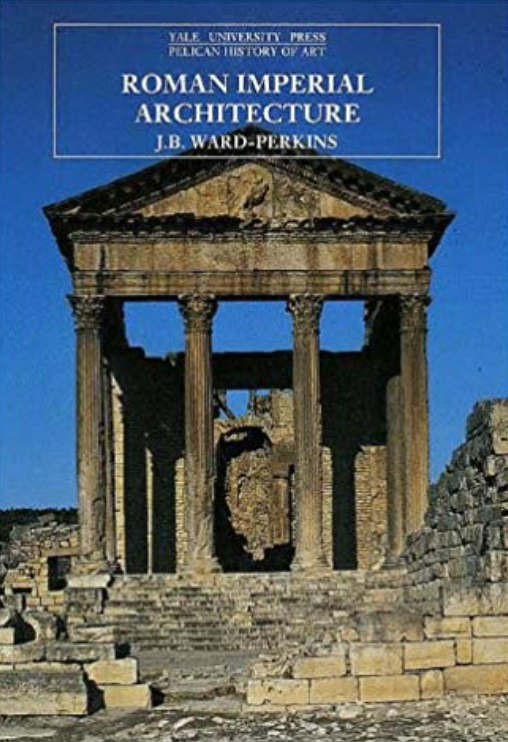 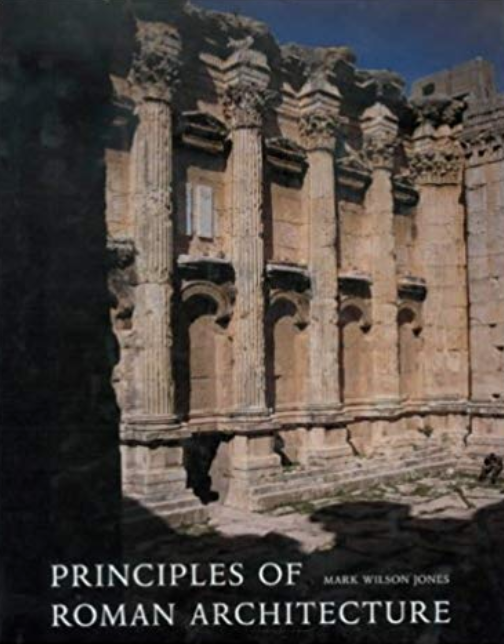 Created by The American Institute of Roman Culture, published on 12/13/2019 under the following license: Creative Commons: Attribution-NonCommercial-ShareAlike. This license lets others remix, tweak, and build upon this content non-commercially, as long as they credit the author and license their new creations under the identical terms. Please note that content linked from this page may have different licensing terms.