Seminar – Becoming a God; the Deification of the Roman Emperor 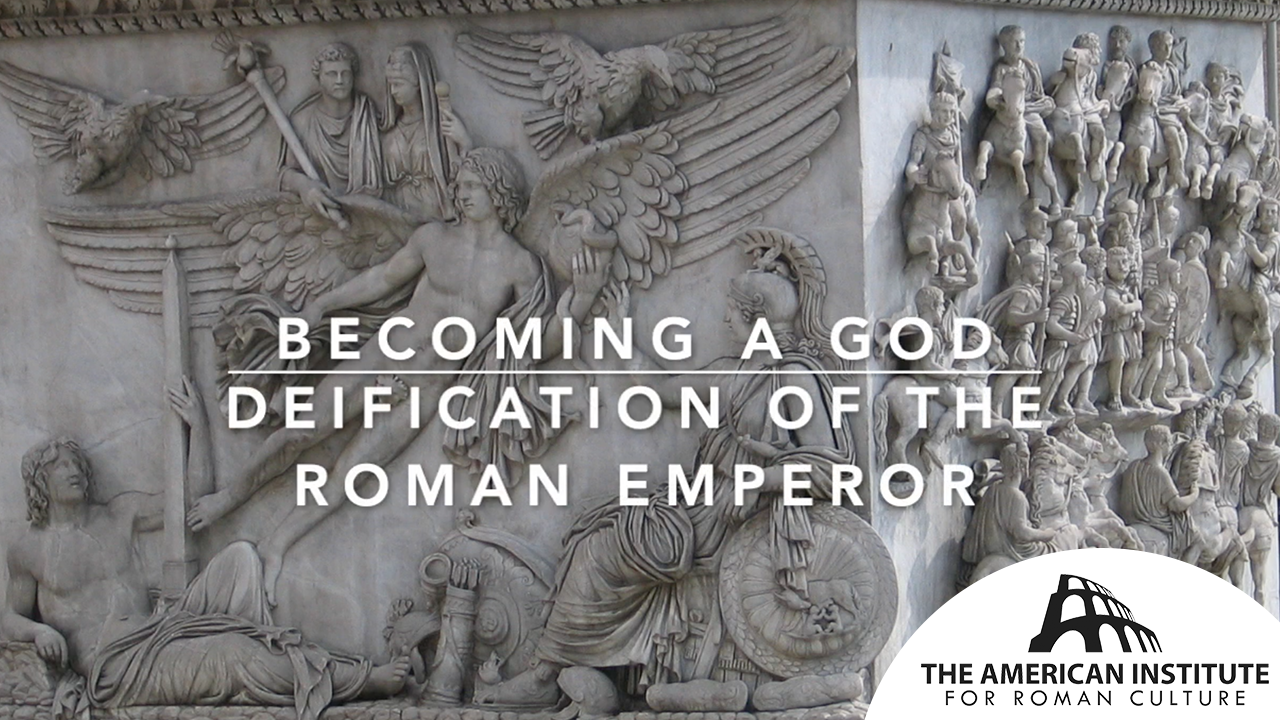 The process of deification is one that all Roman emperors would have aspired to achieve, though not many of them would have lived up to it.

The first Roman to be deified was arguably Romulus, Rome’s first king hundreds of years before the empire existed. He became the god Quirinus according to Plutarch. Whilst Julius Caesar was deified after his death, and Octavian’s coinage pushed this connection as him being ‘DIVI F’ (son of the divine), he still wasn’t an emperor.

Out of Suetonius’ 12 Caesars, 5 were deified – Julius, Augustus, Claudius, Vespasian and Titus. Upon deification emperors would have had a temple built by their successor (though Nero never finished Claudius’ temple, that was down to Vespasian). Julius, Augustus, Vespasian and Titus had theirs in the Forum Romanum, with the two Flavians sharing one, and Claudius’ was on the Caelian Hill. The only one without visible remains today is the Temple to the Divine Augustus. A trend here, and continued through until the Severan period is that only emperors who history has seen as “good” have been deified, and said deification may be a part of why history has remembered them as “good”. All of the emperors in the Nerva-Antonine dynasty were deified, including Commodus. This breaks the ‘only good emperors get deified’ trend, though it was done by Septimius Severus to make himself popular with the remaining family of Marcus Aurelius. It is important to note that Antoninus Pius had to fight for Hadrian to be deified, which may have been a reason behind the Pius part of his name. Part of the temple to the Divine Hadrian stands in Piazza di Pieta today, Antoninus’ Temple is in the Forum Romanum, and it is thought that Trajan’s was at the end of his Imperial Forum. It is not known where the temples to Nerva, Marcus Aurelius, or Lucius Verus were. Though perhaps in the same area of Hadrian’s in the Campus Martius would be a good estimate. There are several surviving representations of the process of deification, one depicts Sabina, wife of Hadrian being deified, and comes from the Arch of Portugal, Titus can be seen on the back of an eagle in the centre of his arch’s vault in the Forum Romanum, and the base of the Column of Antoninus Pius in the Vatican Museums depicts Antoninus and Faustina being carried off to heaven by a winged Genius. In the earlier imperial period it would take ratification by the Senate to have an emperor deified, though as time goes on it seems as if emperors could deify their predecessors without approval of the Senate, or force the Senate to accept that deification. The process of Deification would last until Constantine the Great.

Created by The American Institute of Roman Culture, published on 04/06/2020 under the following license: Creative Commons: Attribution-NonCommercial-ShareAlike. This license lets others remix, tweak, and build upon this content non-commercially, as long as they credit the author and license their new creations under the identical terms. Please note that content linked from this page may have different licensing terms.