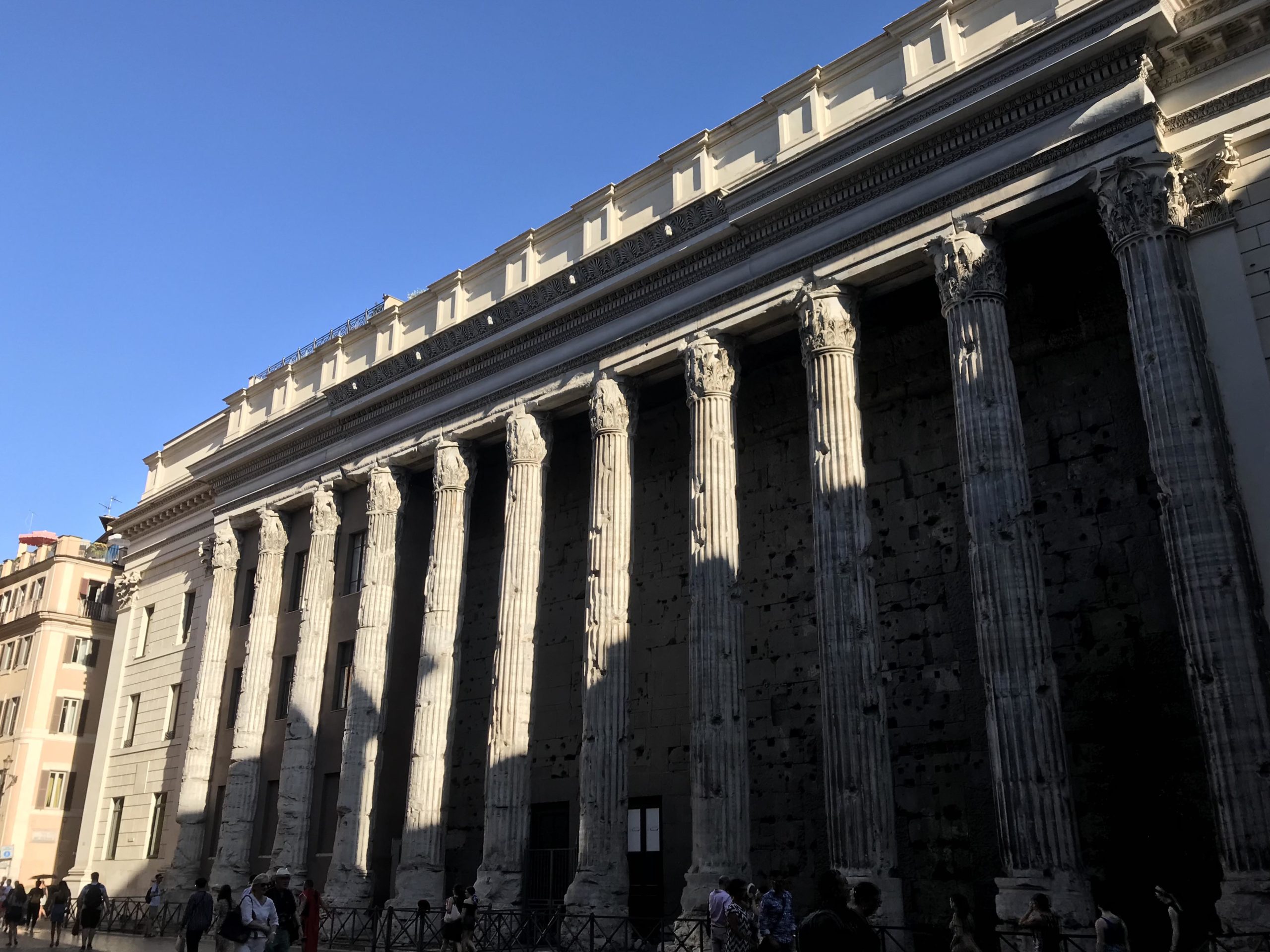 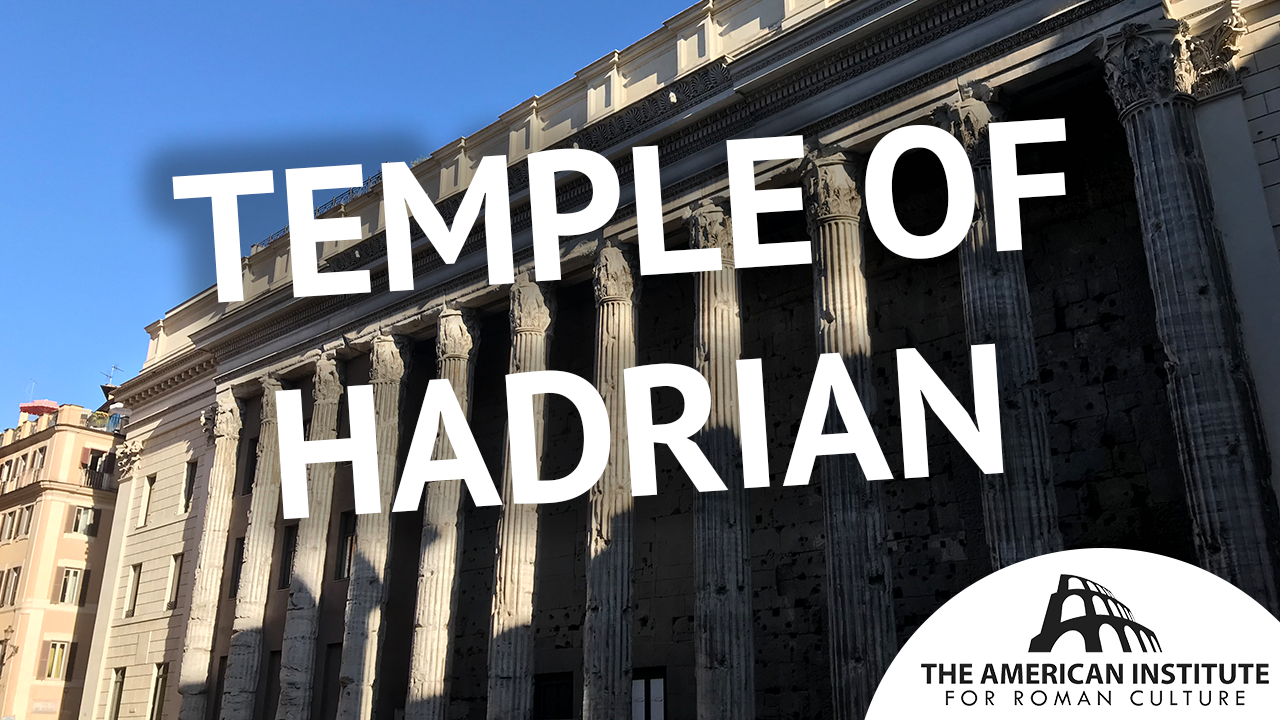 The Temple of Hadrian was for the deified emperor Hadrian, who reigned 117-138. He was buried in his new mausoleum, and his temple was close to the Pantheon in the Campus Martius. The massive temple is partially intact today, part of Rome’s chamber of commerce. The temple was surrounded by porticoes surmounted by panels depicting military trophies alternating with figures of women that represented the provinces of empire. The panels are located in many museum collections, especially Capitoline Museums, Palazzo Massimo and Museo Nazionale di Napoli. 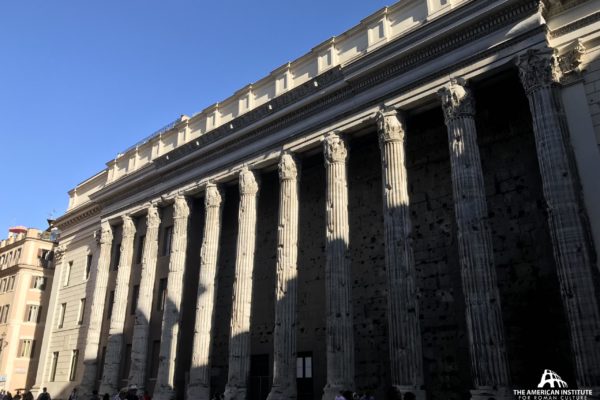 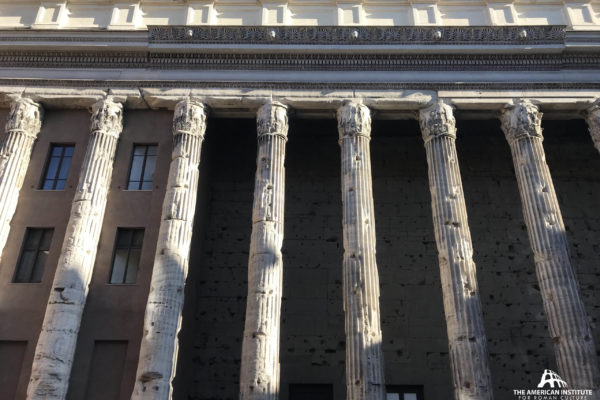 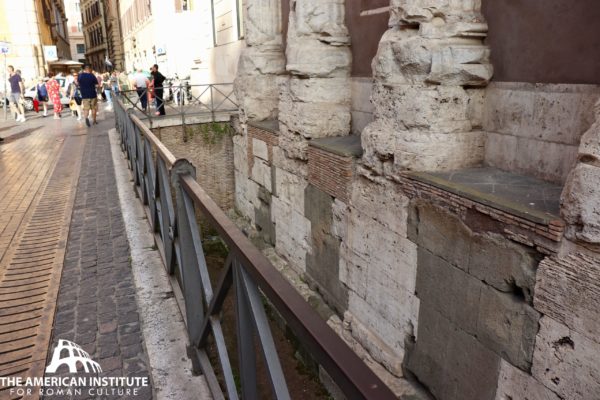 DIVUS HADRIANUS TEMPLUM, HADRIANEUM, (Not.): a temple of the deified Hadrian in the campus Martius, dedicated by Antoninus Pius in 145 A.D. (Hist. Aug. Pius 8; Verus 3; cf. also BC 1885, 92-93 and HJ 608, n. 19). From its position in the list of Reg. (Reg. IX), it was probably between the column of Marcus Aurelius and the thermae Alexandrinae, and is to be identified with the ancient structure in the Piazza di Pietra which is now the Bourse and was formerly called erroneously the basilica or temple of Neptune (HJ 608-610; Lucas, Zur Geschichte d. Neptunsbasilica in Rom, Berlin 1904.

The stylobate was adorned with reliefs, those beneath the columns representing the provinces, and those in the intercolumnar spaces trophies of victory. In all, sixteen statues of provinces and six trophies are in existence, but they are in five different collections in Rome and Naples (Jahrb. d. Inst. 1900, 1-42; S. Sculpt. 243-246, 388-392; SScR 237-241; JRS 1914, 5; Cons. 3 ff.; PT 62). It is probable that the temple was octostyle, peripteral, with fifteen columns on a side. If a wide flight of steps occupied the whole front of the stylobate, there would be space for thirty-six reliefs beneath the remaining columns of the peristyle, the number of provinces in the time of Hadrian.

This temple was enclosed by a rectangular porticus, of which some ruins have been found-namely, portions of a travertine pavement 4 metres below the present level of the soil, peperino blocks, a Corinthian column of yellow marble, and various architectural fragments. It is possible that this may be the PORTICUS ARGONAUTARUM (q.v.; OJ 1912, 133-134).

Where in Rome is the Temple of Hadrian? 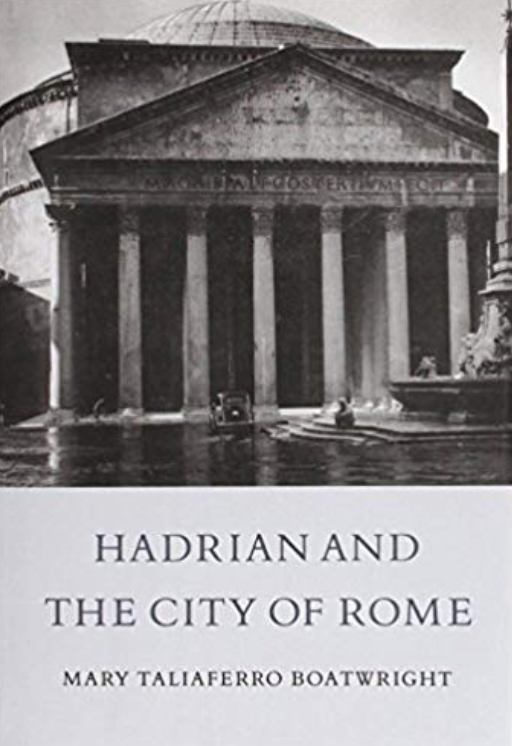 Hadrian and the City of Rome 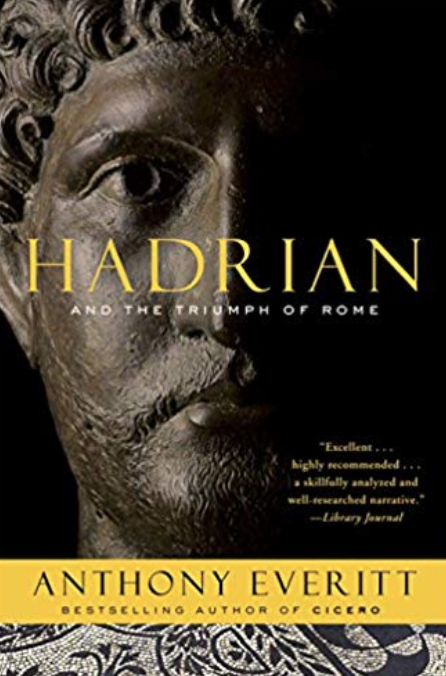 Hadrian and the Triumph of Rome Paperback – September 14, 2010

The Architecture of Roman Temples: The Republic to the Middle Empire First Edition

Created by The American Institute of Roman Culture, published on 01/24/2020 under the following license: Creative Commons: Attribution-NonCommercial-ShareAlike. This license lets others remix, tweak, and build upon this content non-commercially, as long as they credit the author and license their new creations under the identical terms. Please note that content linked from this page may have different licensing terms.