The Pons Cestius is the second bridge joining to the Tiber Island. It’s not as well preserved but still is an impressive monument from imperial Roman times, rebuilt in the 4C AD. And last dismantled and reassembled with the construction of the flood walls (late 19C). 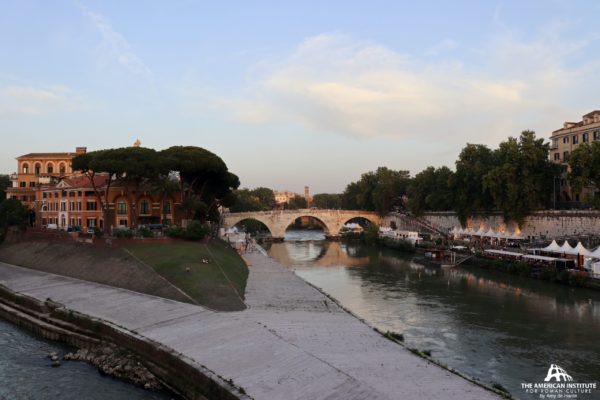 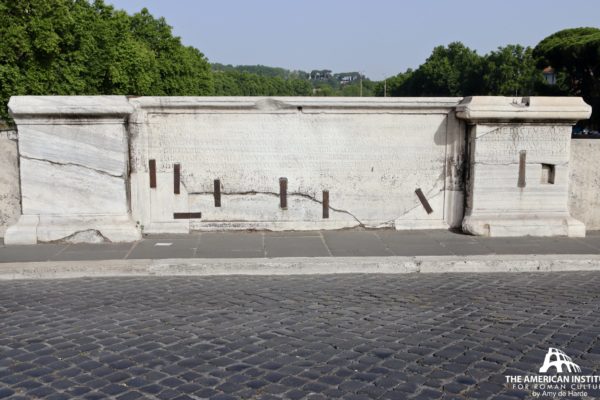 PONS CESTIUS, the modern Ponte S. Bartolomeo, the first stone bridge from the island to the right bank of the river. It is mentioned only in Not. app. and Pol. Silv. (545), but probably was built soon after the pons Fabricius. Several Cestii of some prominence are known in this period, and the bridge was probably constructed by one of them, while curator viarum, between 62 and 27 B.C.

In the fourth century the pons Cestius was replaced by what was practically a new structure, which the Emperors Valentinian I, Valens and Gratian finished in 369 (Sym. Pan. in Grat. p. 332) and dedicated in 370 as the pons Gratiani. There were two inscriptions recording this event, each in duplicate, the first cut on marble slabs placed on the parapet on each side of the bridge, the second beneath the parapet (CILvi. 1175, 1176). One of the former1 is still in situ. The pons Gratiani was 48 metres long and 8.20 wide, with one central arch, 23.65 metres in span, and a small arch on each side, 5.80 metres wide. The material was tufa and peperino with facing of travertine, and the pedestals of the parapet probably supported statues of the emperors as those of the pons Fabricius did hermae. The construction was rough and characteristic of the decadence, and very little of the earlier pons Cestius could have survived in the later structure, although the general appearance and form of the two bridges were doubtless about the same.

The pons Gratiani was restored at various times between the twelfth century and 1834, but in 1888-1892 the building of the new embankment and the widening of the channel made it necessary to take down the old bridge and erect a new one, 80.40 metres long, with three arches. The central arch of the new structure reproduces the original exactly, although only about one-third of the old material could be used again (Jord. i. I. 418-420; Mitt. 1889, 282-285; Besnier 106-119, and literature there cited).

Where in Rome is the Pons Cestius?