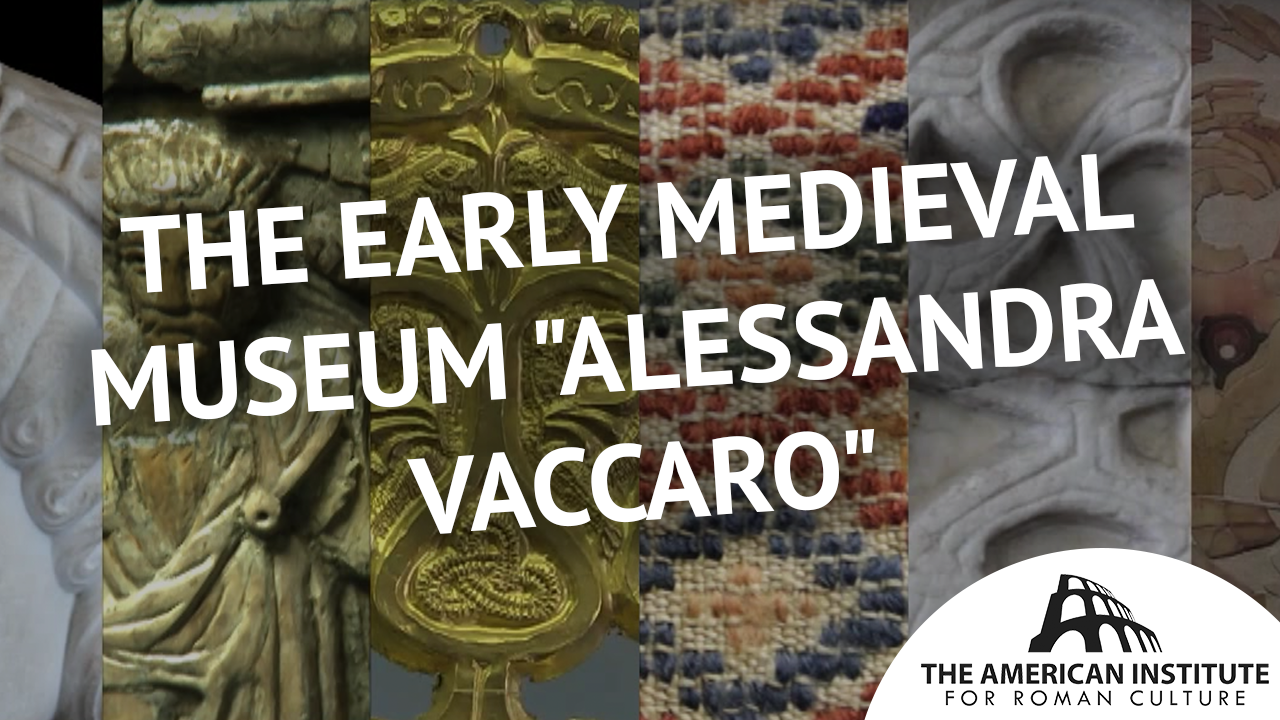 The National Museum of the High Medieval period, located in the Rome district of EUR, on the Metro B line, offers insight into the “Dark Ages”.  In particular the Museum focuses on the period of disarray and change in the Roman Empire, Rome included, from the fourth century to the seventh century CE.   It was the time of the Gothic Wars, when the Eastern half of the empire reconquered the West, for a brief time.  The museum collection invites a discussion of the terms Antiquity, Late Antique, Early Medieval, and Late Medieval.   The material culture on display traces the state of Rome as the city flourished, then declined.  Urban life, though diminished, continued. This museum, with the Crypta Balbi Museum of Museo Nazionale Romano, is the best collection for examining life in Early Medieval Rome. The protagonists in this chapter of Rome’s history are many: Roman, papal, municipal, Byzantine, “Barbarian”, Longobard.

The Museum begins with examples of Late Antiquity, including a sixth century CE fistula (inscribed lead pipe), sixth century inscription, Byzantine era portraits, and a precious fibula.  The next several rooms underscore arrival of the Longobards, who entered Italy in 569.  They settled and conquered until the arrival of Charlemagne; their legacy in Italy was far longer. The rich Longobard grave goods on display from Umbria and le Marche, in particular two excavated necropoleis: Nocera Umbra and Castel Trosino, dating to the 6-7 centuries CE. The grave goods are of exceptional quality, including armor and weaponry of deceased soldiers, as well as gold jewelry of deceased women.

Next, the Carolingian period is represented by an array of architectural balustrades.  Also of the Carolingian period, there are two examples of  “domuscult” papal constructions. Dating to the 8-10 centuries CE, they are agrarian centers, of S. Cornelia and S. Rufina built in the Roman countryside for feeding Rome. They were each located on martyrdom and burial sites of two saints killed in the third century CE. These agrarian centers only declined in use around the twelfth century CE.

The museum visit culminates with a large space containing a reconstruction of a portion of a Late Antique seaside domus from Porta Marina, Ostia Antica.  The decoration is one the  greatest preserved examples of opus sectile  (cut pieces of colors marble) decoration, with complex geometric patterns, enigmatic Christ/ philosopher figures, and lions attacking.  A series of didactic rooms detail the types of marble and provenance (e.g, yellow giallo antico marble from Tunisia, green porphyry serpentino from Sparta) as well as workmanship of the ceiling and wall decoration.   The domus was found in the 1940s. The halls excavated were actually incomplete; the remains found were a work site, dating (via coins) to 394-400 CE.  The hall was 7.95 X 6.7 meters, and the exedra was 6 X 3.9 meters.  Both areas are reconstructed in the museum. Few contemporary works of art compare to this masterpiece of design and craftsmanship.  (Two examples include the decoration from the Domus of Junius Bassus and the domus atop the Sette Sale cistern for the Baths of Trajan).  The final restoration of the domus decorations took place between 1959-1966.  The presentation today and the related didactic materials make a trip to the museum one of the truly great experiences in Rome museums today!

Where in Rome is the Early Medieval Museum?

Created by The American Institute of Roman Culture, published on 03/27/2020 under the following license: Creative Commons: Attribution-NonCommercial-ShareAlike. This license lets others remix, tweak, and build upon this content non-commercially, as long as they credit the author and license their new creations under the identical terms. Please note that content linked from this page may have different licensing terms.