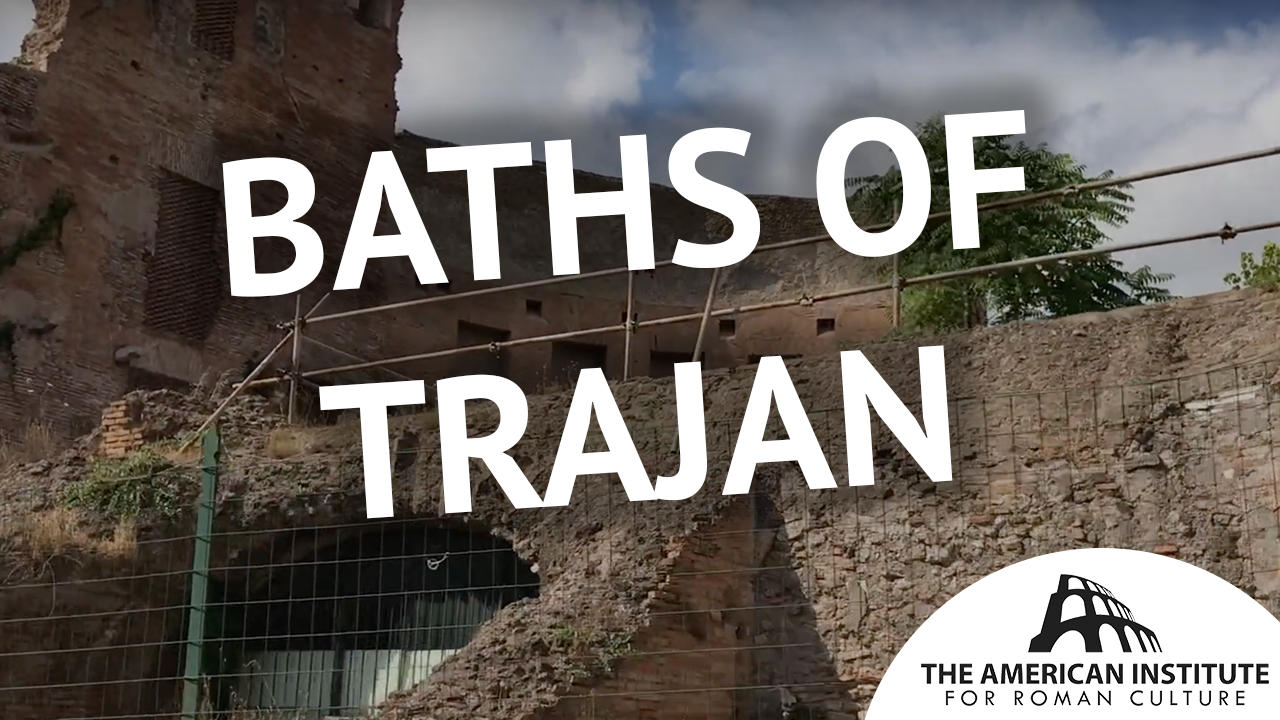 The Thermae Traiani, or the Baths of Trajan, are situated on the Oppian spur of the Esquiline Hill. Construction started in AD 104 and the complex was dedicated on the kalends of July in AD 109.

The Baths were the fourth of the imperial bath complexes that we know of, after those of Agrippa, Nero and Titus, but the first to be built on such a colossal scale. A scale that the Baths of Caracalla and Diocletian took even further. Before the Baths were built, the area was used as one wing of the Domus Aurea, which is the area that can still be visited. This was filled in and used as a platform for the construction of the Baths.

The Baths covered an area roughly 330 by 340 meters and was on a northeast to southwest axis, perhaps to maximise the sun. The Baths were most likely designed by Trajan’s architect Apollodorus of Damascus, who also designed the bridge over the Danube and Trajan’s Forum. The Baths remained in use into the 5th century, though had gone out of use by the time of the Ostrogothic siege of 537. The view from the Baths would have looked down over the Colosseum Valley, across the Imperial Fora and Roman Forum, to the Palatine and Capitoline Hills. Quite a view! Several sections of the Baths can be seen as one walks through the Parco del Colle Oppio today, with the southwestern exedra and a nymphaeum wall being two of the larger surviving sections. The Cisterna della Sette Sale across the road from the park, would have been part of the water supply for the Baths. Underneath the Baths are the remains of a previous structure that feature a large mosaic wall and a smaller fresco of an idealised city. Perhaps one day this part of the structure will be opened to the public, but for now it is kept behind closed doors. The plan and layout of the Baths of Trajan were followed, though enlarged, by the Severans and Diocletian for the building of the Baths of Caracalla, and the Baths of Diocletian in the 3rd and 4th centuries.

THERMAE TRAIANI, built for Trajan by the Greek architect Apollodorus (Paus. v. 12. 6:ἀξιολογώτατά ἐστι λουτρὰ ἐπώνυμα αὐτοῦ καὶ θέατρον etc.; Kaibel, IGI 1055; Cass. Dio lxix. 4. 1:᾿Απολλόδωρον τὸν ἀρχιτέκτονα τὸν τὴνἀγορὰν καὶ τὸ ᾠδεῖον τό τε γυμνάσιον τὰ τοῦ Τραιανοῦ ποιήματα ἐντῇ ῾ρώμῃ κατασκευάσαντα, where γυμνάσιον probably refers to the thermae). These baths were immediately north-cast of the thermae Titi, and in the chronicle of S. Jerome (a. Abr. 2105) the thermae Titianae et Traianae are assigned to the reign of Domitian, which may perhaps indicate that the latter were planned by that emperor. Because of this statement these baths are mentioned in early church writings as thermae Domitianae (cf. LP xxxiv. 33; liii. 9; Mel. 1886, 3-4; BC 1886, 245; Mon. L. i. 484-485). In Trajan’s time they were used by women (Chron. 146:hoc imperatore mulieres in thermis Traianislaverunt); little images (sigillaria) were exposed for sale in the porticus of the thermae in the last days of the Saturnalia (which were sometimes called Sigillaria from this practice; see SIGILLARIA) (Schol. ad Iuv. 6. 154); they are mentioned incidentally in inscriptions (vi. 9797=AL 29. 4; 8677, 8678); and in the fourth or fifth century they were adorned with statues by Iulius Felix Campanianus, prefect of the city (CIL vi. 1670). The correct name was attached to the gradually diminishing ruins until about the sixteenth century, when it was displaced by the incorrect name, thermae Titianae.

Part of these baths is represented on a fragment of the Marble Plan (109; cf. Lanciani quoted by Gatti, BC 1886, 272-274), and in the sixteenth and seventeenth centuries drawings and plans were made of the existing ruins-the most important being those in the Destailleur collection in Berlin1 (cf. Mitt. 1892, 302-304; HJ 313, n. 72). By the end of the eighteenth century most of these ruins had been destroyed, and the principal remains now visible belong to the exedrae at the north-east and south-west corners of the east palestra. These baths were in Region III (Not.), on the Esquiline, just south-east of the present church of S. Pietro in Vincoli. They were within the precinct of the domus Aurea, a considerable part of which was destroyed or buried beneath them. From information at hand it is possible to reconstruct their plan in its main features (see LF pls. 23, 30; LR, fig. 138 (text fig. 7)). These thermae marked an intermediate stage between the earlier and later type, in that the central complex of buildings was partly surrounded, on the east, west, and south sides, by a peribolus which contained reading rooms, gymnasia, and exedrae at the four corners. On the north side there was no enclosure, but the facade of the building with the main entrance in the middle. The frigidarium, central hall, tepidarium, and caldarium  2 were arranged in the usual order from north to south in the centre of the main structure, with apodyteria or dressing-rooms, open courts or palaestrae surrounded with colonnades in the middle of the east and west sides, and the usual number of small baths and rooms for various purposes. From the middle of the peribolus on the south side, a very large exedra projected outward which served as a theatre. This exedra was built over part of the domus Aurea, and in order to provide sufficiently strong foundations for the cavea of the theatre, additional walls were built through the chambers of the domus, some corresponding with the walls of these chambers, and others with the orientation of the baths themselves. The axis of the domus runs north and south, while that of the thermae runs north-east and south-west at an angle of 30 degrees from the meridian. The extreme measurements of the baths are 340 metres in width and 330 in depth, or, excluding the exedral projections, 280 by 210 metres.

Where in Rome are the Baths of Trajan?

Created by The American Institute of Roman Culture, published on 02/21/2020 under the following license: Creative Commons: Attribution-NonCommercial-ShareAlike. This license lets others remix, tweak, and build upon this content non-commercially, as long as they credit the author and license their new creations under the identical terms. Please note that content linked from this page may have different licensing terms.